This, too, is part of the BHL phenomenon.

Not a "French phenomenon," mind you, but a "BHL phenomenon," because it is only with Bernard-Henri Lévy that such a situation, such a sequence of events, could unfold.

The committed philosopher, the last heir of Sartre, writes a play that has run for a month at the intimate Théâtre de l'Atelier at the base of Montmartre in Paris. And, over the space of a few weeks, taking their place in the audience are former French president Nicolas Sarkozy, incumbent president François Hollande, and Prime Minister Manuel Valls, the young hope of the French left.

It's as if David Mamet had a play on Broadway and the audience was joined by George W. Bush, Barack Obama, and John Kerry.

The Place Charles-Dullin in Montmartre is filled with its usual occupants: the evening pigeons, a group of homeless Africans singing and toasting with their beer cans, the parked motorbikes of neighbors, the chestnut trees in the square changing into their fall colors, the two corner cafés welcoming customers to their sidewalk tables, late-arriving theatergoers hurrying across uneven, slippery cobblestones toward the theater, the signal from inside that the show is about to begin.

The curtain will go up in five minutes. It is in those last minutes that, at intervals of a few days, Sarkozy, Hollande, and Valls arrive.

It is easy to imagine the audience's surprise.

A temporary surprise followed by an cascade of selfies by audience members wanting a picture of themselves with the president or prime minister, who, submerged in the crowd, is far from his pedestal.

Followed by laughs every time Sarkozy, Hollande, or Valls is mentioned in the play. 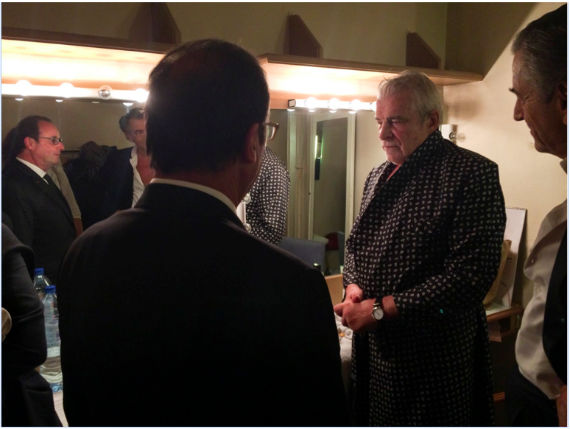 It's a one-man show. When the curtain goes up, Jacques Weber has no idea who's in the audience. But this great veteran of the Paris stage has a sixth sense: He "feels" his audience at every performance. And, no sooner does he take the stage than he discovers -- he says as much afterwards to the two presidents who come backstage to greet him (pictured) -- an altered audience that laughs a new sort of laugh and reacts differently to the sallies of a monologue written and delivered to awaken a Europe that has gone off the rails. 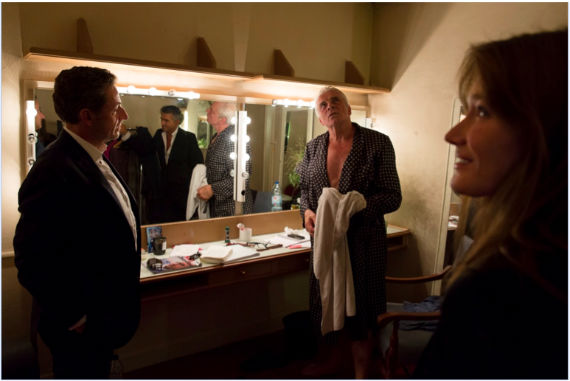 Weber's character rails against the Mistral-class warships that France was planning to deliver to Russia while Putin was busy invading Ukraine, the warships pending delivery, the warships not delivered.

He disses an English journalist who wants his views on the trashy book of the president's former companion, Valérie Trieweiler. 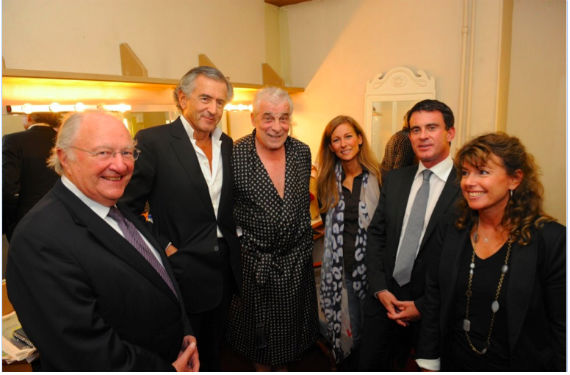 He laughs with the rest of the audience when, from the video alerts on his computer, he learns about the campaign of Socialist presidential aspirant Arnaud Montebourg, the ferocious "Made in France" chauvinist, who had been pushed out of the François Hollande government a few days earlier for political insubordination, having called for a boycott of "Hollande cheese."

And he throws in the face of all the French the Surrealists' famous satire of a "people of pigs and dogs," launched against Paul Claudel at the end of the First World War and relaunched now against a European populace that kowtows to Putin on Ukraine so that the Russian leader won't turn off the gas that keeps them warm in winter.

The members of the audience are right there with him.

They have even more fun when a "target," and not just any old target, is in their midst. 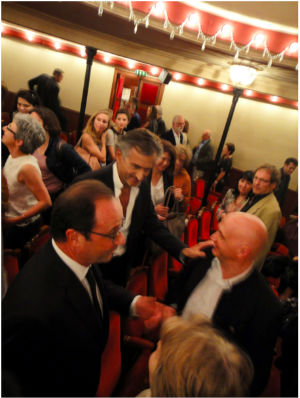 At one point in the play Weber's character says: "That's always what I say when people ask whether Sarkozy wants to make a comeback... Of course he does. The hardest of hard drugs, the only one you can never quit, the only one, moreover, that is freely available, is politics, approval, that crazy love that drives you crazy. Taste it once, you'll dream of it forever. One hint of the beast's caress will pursue you to your dying day." The entire audience explodes in laughter, swiveling in unison in their seats to try to see the effect on the face of the target of this barb, who is, in fact, in full come-back mode, looking to take his revenge in the next presidential elections.
Sarkozy and Hollande are good sports and laugh as much as the others at the jabs directed at them. 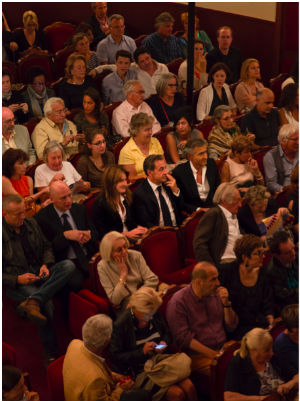 After each of the three visits, the evening ends at Momo, the little couscous joint adjacent to the theater, where Bernard-Henri Lévy has all the time in the world, as the French press says, "to whisper in presidents' ears."

With Nicolas Sarkozy, Manuel Valls, and François Hollande all coming to see Hôtel Europe, the play is sold out. 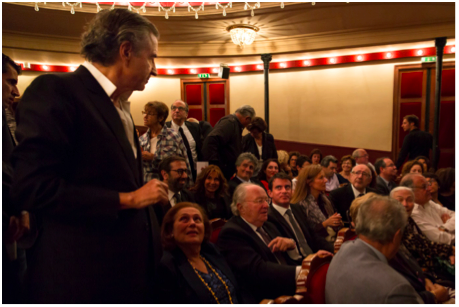