Yesterday, an article revealed that in its well-intentioned efforts to crack down on taggers and graffiti defacers, Detroit law enforcement planned to fine some building owners on Grand River Avenue for wall murals. 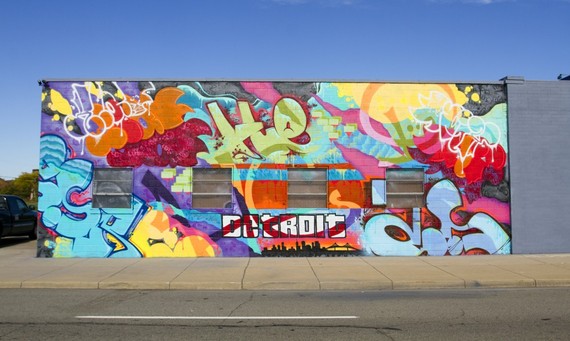 These murals are located in the Grand River Creative Corridor. The GRCC is an art initiative that facilitates the commission of large murals like the above in a struggling area of Detroit deemed by one co-worker to be "filled with heroine." Currently, over 100 murals have been commissioned and painted by artists from across the globe. The art is a strategy to combat the blight that scars the area. It seems to have proven both sustainable and successful, to judge by the steady stream of murals in progress. Not only does the GRCC beautify with its murals, it also generates amazing and provocative dialogue on the nature of art. One example is this official statement in response to the defacing of one of their murals and the ensuing comments.

According to the above linked article, fine amounts for the Grand River "defacement" were slated to top $8,000 for Derek Weaver, the founder of the GRCC. Weaver was also to receive a mandate to remove some of the additions. The article described how enforcement officers who were on the premises temporarily seized a camera from a PBS film crew that was documenting an artist painting a mural.

After this incident, Mayor Mike Duggan lifted the fines and tweeted:

A source close to the issue stated that it was necessary for this kind of incident to happen in order for the lines between art and blight to be clarified. That clarification in turn can allow this aspect of the mayor's impressive initiatives to crack down on blight to be accurately implemented. Let there be no doubt, what this administration is doing to address Detroit's blight is exemplary, inspiring and unprecedented on a national scale. And any undue fines on this matter are to be revoked, according to the most recent information available.

This near-take down of art that was created to combat blight in the first place puts the seemingly esoteric question of what art is in an all-too-real context. The above mural may easily be recognized as art, but what about this? 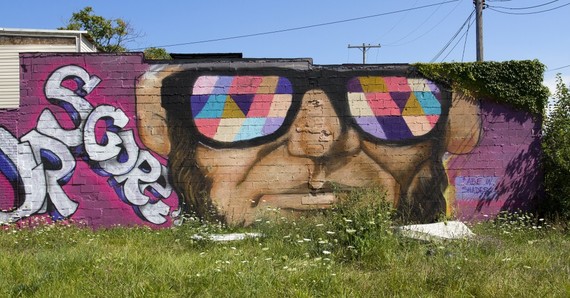 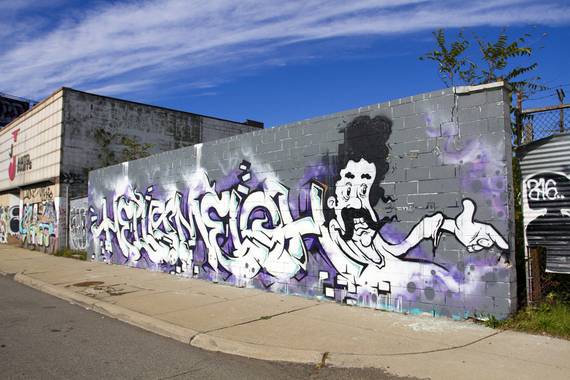 Who gets to decide? Why? On what authority?

Each of the two above is also located in the Grand River Creative Corridor. In their work to address the tagging that blights Detroit, enforcement officers are being faced again and again with the question of what art is. This situation is an impressive reminder of just how important art is not just to the Grand River Corridor or Detroit, but to society and civilization at large. The study of art is often belittled, and art often goes under-appreciated but this situation is a case study in just how meaningfully art can effect social change for the better, in this case by beautifying a neighborhood. To dole out fines for wall art, or sell the Detroit Institute of Arts' assets to satisfy creditors in the city bankruptcy, would be to destroy the core of what sustains this city and will continue to make it stronger.