It is no secret that great change is afoot in markets for digital content; inescapable headlines drive that fact home. The changes have dramatically altered the landscape for content creation, but as a recent study commissioned by my association reflects, these monumental shifts have largely benefited consumers, and the economy. While a few obsolete gatekeepers might bemoan the changes, claiming the sky is falling, in reality, it is exactly the opposite.

Online video is a whirlwind of new developments, with longtime cable incumbents like HBO and ESPN, and even broadcaster CBS, announcing their own over-the-top video services, even as YouTube reports paying out $1 billion to rights-holders. Indeed, young YouTube celebrities are crowding the Hollywood regulars off of magazine covers.

The story is similar with respect to books. Publishers are attempting to cut out vendors like Amazon and Barnes & Noble by selling direct to consumers via their own websites, and many self-publishing authors are making as much or more than those going through the traditional publishing routes. And so it is in other content sectors as well -- the quantity, availability, and consumption of music and video games, for example, are at or near all time highs. 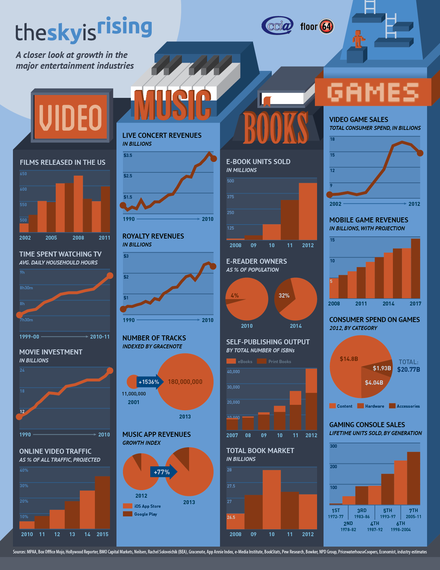 The means of developing content and the facilities for distributing it have become democratized. New technology and the Internet allow creators of all sorts to bypass traditional gatekeepers and reach audiences of unprecedented size. We are experiencing a creative revolution in content creation and distribution. A revolution that brings great improvements along with great change is not going to be without its opponents. The beneficiaries of the old order, whose incumbency is threatened by systemic change, cannot necessarily be expected to place the greater social good over the viability of their business.

Consider that the transportation revolution at the turn of the last century may have been a wonderful development -- unless you were the business that was making the buggy whips that nobody needed anymore. In that case, the revolution doesn't look so good.

While we should not overlook the plight of the buggy whip maker, we shouldn't accede to efforts to slow down technological progress on his behalf either. Fierce competition produces winners and losers. In a free market, we need to worry about the consumers, and competition in general, not the competitors. Individual competitors have to get with it, or get out of the way. Indeed, a New York Times column observed some years ago that a few innovative tack and harness manufacturers like Studebaker in fact managed to retool to meet the demands of the 20th century.

It will be the same with the digital content revolution. Some of the old gatekeepers, middlemen, and incumbents will be swept away by the tide of change; others will adapt and innovate, however, and prosper. In the meantime, creators have more powerful platforms at their disposal, and can reach ever broader audiences with little effort. At the same time, consumers' options for lawful access to content multiply innumerably. Even if a few disintermediated incumbents complain loudly that the sky is falling, the data tells us a very different story.