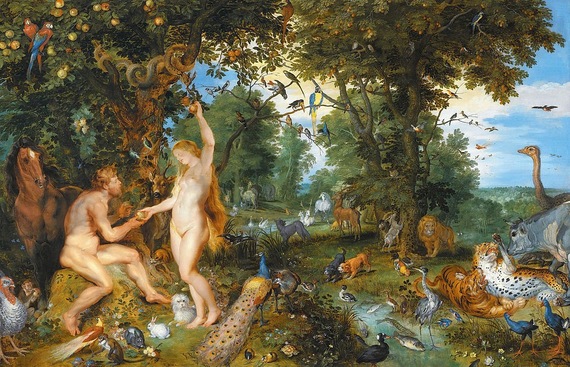 Why is modesty so dearly preserved in some venues and so categorically denied in others? A recent Times piece about the spa at Baden-Baden ("Naked Came the Strangers," NYT, 10/10/14) describes how it's absolutely forbidden for anyone to cover themselves at the Friedrichsbad baths. There men and women face not only rejection and dejection, but ejection if they refuse to parade around naked (though one would suspect that erections are probably discouraged).

However, several days later the Times ran a story about some torrid happenings at another bath ("Prominent Rabbi Arrested on a Charge of Voyeurism," NYT, 10/14/14). The Times story describes how a respected Orthodox rabbi was arrested on suspicion of "placing a hidden camera in a changing" room of the "ritual bath," or mikvah, of his congregation. The issue seems to come down to private parts. Just about everyone has them. And they're equal opportunity employers to the extent that they're basically the same depending on the sex. Yet since the time of Eve losing mankind's innocence, they seem to have taken on great symbolic value.

Penises and vaginas are merely flesh surrounded by pubic hair. None of this qualifies as being anything new under the sun. It's because society has proscribed men and women from viewing each other's private parts that such sights have been accorded increased value. It's supply and demand. Eve's picking the fruit was like the Volstead Act. Once prohibited, nudity became more desirable for being rare. Obviously the rabbi's crime had to do with violating an individual's right to privacy, but in a way he and those who do similar pranks are a little like bootleggers whose pleasures and profits come from the forbidden. Anyone who's ever been to a nude spa like the one described in the Times knows that the novelty is exhausted faster than you can say Auf Wiedersehen.

painting: "The Earthly Paradise and the Fall of Adam and Eve" by Jan Brueghel the Elder and Peter Paul Rubens