Money in politics is nothing new. Scholars have described the corrupting influence of money at least as far back as the Roman Empire. In the U.S., the first federal campaign finance law was enacted in 1867, when federal employees were banned from pressuring naval yard employees to contribute to candidates.

But the 2010 Supreme Court decision in the Citizens United case represents a new low in our already distorted money-based political system. In Citizens United, the Court ruled for the first time that corporations should have free speech rights to influence elections, giving them virtually free reign to put unlimited funds into influencing elections.

The problem is, corporations have more money. A lot more. And money talks. In fact it talks so much and so loudly that it has effectively drowned out the voice of the people. Their lobbying efforts, campaign contributions, and media blitzes are now the dominant influence in our politics. The idea that our democracy should represent the will of the people is no more. 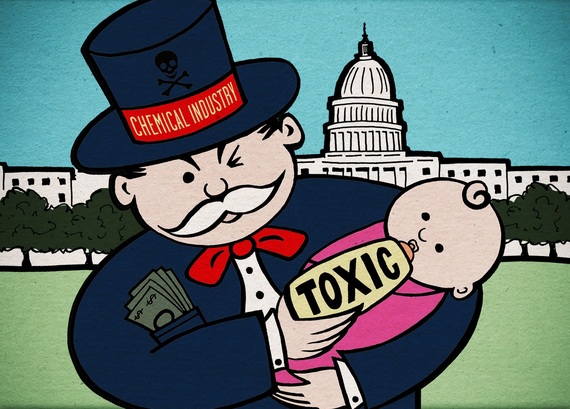 At the Center for Environmental Health, we face the results of this every day with the laws that are failing to protect children and families from toxic chemicals, laws created in large part due to the undue political influence of chemical corporations.

More recently, we've seen the chemical industry's lobbying exert its influence over federal policies. Virtually everyone agrees that our country's 40-year-old chemical safety rules are outdated and inadequate to protect Americans from harmful chemicals. The chemical corporations' response is to promote legislative "reforms" that would maintain most of the ineffective elements of the old law, and even worse, would do away with state and local level chemical safety laws that are actually working to protect the public. While they were drafting and promoting this retrograde approach, between 2011-2014 the chemical companies and their industry trade group gave more than $2.2 million to members of the House and Senate committees that initiate new chemical reform legislative proposals. Unsurprisingly, the lead proposals coming out of the committees contain virtually every item on the industry's wish list.

These are far from harmless political maneuverings. Flame retardants are linked with serious health problems including cancer, reduced IQ, developmental delays, obesity, and reproductive. Other chemicals defended by industry through their political contributions are linked to asthma, obesity, ADHD, childhood cancers and other serious childhood illness -- leading to health care costs of more than $76 billion annually.

The Supreme Court did more than open the door to the undoing of democracy in Citizens United. They also opened a potential floodgate of new chemical health threats backed by unbridled chemical industry spending. It's time for a constitutional amendment to level the playing field and undo the damage, before it's too late for our children.