It has taken me six months to get around to writing promised commentary on the documentary Virunga , now available to stream on Netflix. I got into this project by requesting a screener in June and found myself mired in a kind of mental paralysis, brought on by my own biases and perceived biases of the scriptwriter. Is it fair to criticize this film, which has received nothing but accolades throughout the world? 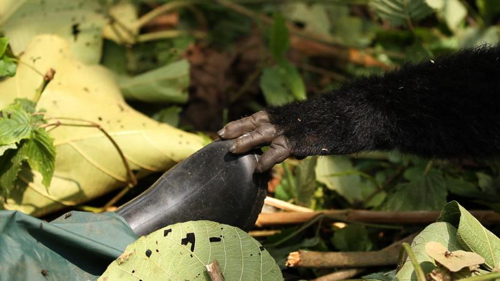 Virunga shines with superb cinematography when the world's surviving mountain gorillas and the landscape of Virunga Park flicker across the screen. It is heartwarming when Andre Bauma, caretaker at the gorilla orphanage at Rumangabo, explains his bond with the young mountain gorillas in his care. Bauma is willing to die for them. The film is inspiring when Emmanuel de Merode rallies the ranger patrols and explains that it is the rule of law, rather than guns, which will decide the future of the UNESCO World Heritage site, now threatened with oil exploration by the British oil company SOCO International. Virunga stuns the viewer with proof of bribes proffered by SOCO to buy off the locals and turn them against the Park.

However, it took four viewings of this documentary before I could identify a protagonist.

The protagonist is not the young French journalist Melanie Gouby, whom the director casts in a dreamy Congo noir setting.

The hero is the collective ghost of 60,000 people who vanish overnight from the Kanyaruchinya displaced persons' camp (IDP) on the southern border of Virunga Park. Gouby enters the camp to find them gone after fierce fighting between the Congolese Army, United Nations troops, and the M23 rebel fighters. Her reaction is not to look for the 60,000 people, ask why they ran, or whom they were running from. Gouby snaps a few photos of the deserted, filthy camp and shrugs off this epic migration. The scene has been repeated again and again after the end of the 1994 Tutsi genocide in neighboring Rwanda, when the perpetrators fled across the border and completely destabilized an already fragile and lawless region. Since 1885, when Belgium's King Leopold demanded a severed hand in a basket for every bullet spent by the plundering army, it has been the indigenous population that has paid the ultimate price for the plundering of Congo.

Journalist Gouby was about to leave the country after spending a year and a half in Goma, when the M23 rebellion broke out in April of 2012. She and the Virunga crew found themselves smack dab in the middle of the biggest Congolese rebel uprising in recent history at the same time that SOCO oil was making its bold and illegal move on Virunga Park. The shelling, bombing and mayhem take over a good part of the film and aspersions are suggested and cast about who is to "blame." But there was no follow-up in the 97-minute film, which could have taken an extra ten minutes to explore the root causes of the rebellion. At one point we hear her say, "Everyone wants their slice of the (SOCO) cake." Is this assumption true?

One has to wonder if the director and writer, Orlando von Einsiedel, is the unwitting example of someone sticking too rigidly to the story he set out to do on paper -- a storyboard vetted by the government of Congo and touting the environmental and development successes of the Park.

After trying to entrap one of the rebel leaders on hidden camera to admit to taking bribes, the attempt fails when the rebel explains that he has private holding of 2000 hectares that SOCO has identified outside of Virunga's boundaries. His private business is separate from his military alliances, he says. Gouby seems disappointed as she says almost unintelligibly "there is no evidence SOCO has entered into an agreement with M23."

You have to listen carefully for this admission. I did not catch it until my third viewing.

A filmmaker recently told me that "great filmmakers are prepared to turn on a dime and pursue the film that unfolds in front of them," but in the case of Virunga, this does not seem to be the case. It takes fortitude and the willingness to be thrown out of the country if the truth surfaces.

Elements of the Congolese army do not fare well either, but you must follow the confusing sequence of interviews very closely. Captain Feruzi, an intelligence commander in the Congo Army, says on hidden camera that he wants de Merode's right hand man, Rodrigue Katembo, to spy on de Merode's actions. "You will get your share and no one will know a thing," he tells Katembo.

SOCO indicts itself with Gouby's hidden camera. In a classic "bait the honey pot" scenario, the young French journalist decides to spend time arranging "dates" with SOCO employee "Julien." The hapless racist oil company employee is caught on camera suggesting that "the only solution is to recolonize these countries," since the people "are like children."

The problem with the overall narrative here is that this film seems to gloss over the root causes of what ails Congo. A disinterested and corrupt central government perpetuates a fragile and uncertain society where international extractive interests like SOCO propagate instability.

In the end, this is a very good film that could have been a great film if the producers could have taken some more risks. Having navigated this part of Virunga in 2007, 2008 and 2009, I can say that taking risks is easier said then done. If the government does not approve of your footage, it is confiscated.

After spending the greater part of the last year exploring the massive oil extraction and environmental degradation of the Bakken oil fields here in the Great Plains of the United States, there are many parallels to be made. But, the First World has massive webs of public utility commissions, empowered local populaces and environmental review requirements as well as watchdog groups to act as a buffer between the environment and development. Sometimes they are successful -- and sometimes not.

There is a Lakota/Ojibwe prophecy that speaks of a black snake, "a creature that would rise from the deep, bringing with it great sorrow and great destruction. For many years, the Lakota people have wondered what the prophecy meant and when it would come to pass. When they heard news of this (Keystone-XL) pipeline -- this tube, immeasurably long, that would pump black oil through the heart of this country -- some Lakota people began to wonder if the snake appeared at last."

While watching Virunga, seeing the mournful eyes of the endangered mountain gorilla, and the listening to the wailing of the village women as they buried their dead, I was reminded of this prophecy.

Enjoy the cinematic glory of the vast resources and beauty of eastern Congo. Be inspired by the bravery of the people and the vision of Emmanuel de Merode. As the spectacular vista dissolves into the sounds and fury of war exploding around the cameras, do not be fooled by the cataracts of cinema. Try to see clearly.

Postscript to the film: Shortly after the film was finished, Emmanuel de Merode was critically injured in an assassination attempt. He was returning from Goma to Park headquarters when unknown assailants ambushed him. Read more about SOCO on the movie blog.