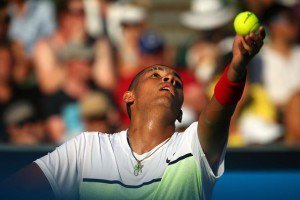 The incredible run of teenage tennis sensation Nick Kyrgios to the quarterfinals of the Australian Open heralds a new age of sports star -- the social athlete -- one whose interaction with his fans is now as close on the field of play as it is off.

In many ways, channeling the spirit of the Gladiator's Maximus, Nick Kyrgios lit up Melbourne Park during the Australian Open in 2015 -- for more reasons than just his raw talent alone.

This 19-year-old kid, whose upset victory over Rafael Nadal on his way to the quarterfinals at Wimbledon last year rocketed him to stardom, has all the assets and appears set to become the nation's next big deal.

Unsurprisingly, Kyrgios has also fully embraced the world of social media and his fans have unprecedented access to his life off the court. It's truly a two-way dialogue that has pushed the boundaries of fan interaction to new levels.

"So many great messages, I can't like and comment back to all but I read EVERY SINGLE ONE of them, thank you. #NoWords #Pumped" -- Nicholas Kyrgios (@NickKyrgios) January 21, 2015

And that is where it gets interesting. He thrives on it. Whether it's engaging his legion of fans online or walking out onto a stadium court, this brave new world is all his. He owns it. He enters the arena looking every bit the part; lines cut into his mohawk, right eyebrow slashed, large style ear ring, listening to his beats via pink headphones, shoulders hunched like a boxer entering the ring -- he is the ultimate entertainer. Watching his eyes, you can see him survey his huge crowds, admiring the vast stage he has to play with, sucking in every ounce of energy he's being given. He lives for these moments. It's intoxicating to witness.

Watching him take out the higher-ranked Ivo Karlovic on Show Court 3 at the Australian Open was pure entertainment. It's an intimate court where the crowd sits right on top of the players -- absolutely perfect for Nick. Within a few games, he had drawn the raucous home crowd right into it, making them as much a part of the show as ever possible on a tennis court. He was out early at end changes, engaging in lively chat directly with anyone who caught his attention -- be it cameraman, ball kid or punter -- he was soon even crowd-sourcing his tactics, asking the front row behind him to let him know which way the huge-serving Croat was going to send it down. He was true to their word as well, often exaggeratedly moving to the direction they suggested. Sometimes they were right, sometimes he moved away from a ball that thundered past him in the opposite direction.

Either way, the crowd was with him every step -- they couldn't have been more intensely involved with their hero's actions if it was on a Sony Playstation -- but this was live and they loved it. He also used the crowd to assess line-calls, challenging a Karlovic serve after the crowd convinced him it was out. It didn't take much -- he was more than happy to roll with them. Turns out they were right and Kyrgios pointed to the group that had made the call and gave them a knowing nod.

There was comedy as well. After Kyrgios put up a meek lob that Karlovic simply swatted away like a fly, he pointed out the absurdity of trying to get a ball over the head of someone standing 6'11'' tall -- "yeah, right, that's a great plan, Nick!" He was even engaging Karlovic himself in chat, praising the man for a ridiculous winning volley he had hit in the previous game when they sat down in their opposing chairs. The interaction drew a wry smile from the Croat, a whopping 16 years Kyrgios' senior, but it was clear he wasn't used to yakking it up with his combatant during the actual match. As Michael Beattie has written previously, the kid is "pure box office on and off the court."

There's no doubt he walks a very fine line though, as was evidenced in his interview after his stirring four-set victory over Karlovic. Many interpreted his answer as "cocky" when he responded to the interviewer's remark that "It was a good comeback from you in that fourth set, because you know... lose this one, you're into a fifth, anything can happen," to which Kyrgios said: "Well, yeah, that's usually what happens when you lose a fourth set, you go into a fifth one." Converse to media reports, I wasn't bothered by the comment but I have to admit that his tweet the following day probably changed my mind.

But that's just how it is with Nick and I don't think we need to force change upon him. Aussie tennis fans have been desperate for a new hero; we are a proud tennis nation with an incredible history in the sport that has been lean for too long. Former world No. 1 Lleyton Hewitt has single-handedly carried that weight of expectation for over a decade and right now, we stand on the brink of league of new players about to make a serious mark -- currently led by Kyrgios. I would argue that it's risky to try and subdue the very thing that has taken Kyrgios this far. It obviously works for him. As former Australian player Wally Masur said on radio this week, Kyrgios is a born entertainer. "It's a great story," he said. "We should just enjoy the ride." Some of the concern is that he will lose focus or that his antics will impact on his performance, but as far as I can see, he has mastered the concept of working within multiple points of reference, of focusing and refocusing within seconds. He feeds off the people's energy on and off the court and he needs to constantly check in with that source to ensure its continuing potency.

Others feel differently, such as Australian tennis legend and dual U.S. Open champion Pat Rafter, who said he is through trying to tell Kyrgios to back it off. "He's a cheeky little bugger ... he needs to calm himself down and find a balance," he said recently. Kyrgios is having none of it, saying simply that Pat is entitled to his own opinion. The two were happy enough to cosy up for a Bonds commercial ahead of Nick's 2014 US Open campaign though, and aside from Pat's desire to see Kyrgios settle down, there's clearly a mutual respect. Let's face facts here; Kyrgios is not the first player in history to excite the crowd in this way. One can hark back to the eras of Nastase, McEnroe and Connors. I was reminded recently of Jimmy approaching the umpire's chair at the 1991 US Open to the rising timbre of the crowd saying: "This is what they want". Nick knows exactly where he is at though, and has been constantly reminding reporters that he's still a teenager. "I guess it's just youth," he said when asked about his fashion sense. "You know, you're not going to see Roger (Federer) or Novak (Djokovic) doing things like this. "I don't think I'll be doing this stuff when I'm 20." Kyrgios has also begun the year with the number 74, in homage to his grandmother -- tattooed on his finger -- and has celebrated each victory in Melbourne by taking a knee.

Personally, I don't think the whole Kyrgios extravaganza is going to just disappear when he wakes up on his 20th birthday -- and I really hope it doesn't -- but I understand where he's coming from. He will evolve and mature. Change is inevitable.

So let's end it this way: For the most part, sport is about entertainment. Tennis matches, especially at night, are beginning to look and feel more and more like rock concerts. Right now, win or lose, Nick is adding to that experience in spades.

Although we never did see the much-anticipated fourth-round clash between Kyrgios and Roger Federer at the 2015 Australian Open, what transpired was possibly even more noteworthy.

While Kyrgios kept up his end of the bargain, the Swiss maestro had an off day in his third round affair, losing to Andreas Seppi, which -- on paper at least -- gave the teenager an easier run into the quarterfinals. True to form though, Kyrgios told the media there was a little part of him wishing Federer had won -- his desire to test himself on the biggest stage against possibly the greatest of all time. As it was though, Kyrgios took on Seppi -- the Italian veteran -- on Melbourne Park's second stadium court -- Hisense Arena -- known as "the people's court" because those holding daily ground passes are allowed access to seating.

It was jam-packed and as loud as a World Cup football match. With the crowd singing Waltzing Matilda to set the scene, Kyrgios soon found himself against the ropes, down two sets to love and facing match points. It looked like the dream was over. But like a phoenix rising from the ashes, he somehow resurrected himself and after three hours and 34 minutes, dramatically stole the show 8-6 in the fifth set in front of a raucous crowd, which had by now been lathered into a foaming frenzy.

Meanwhile, some distance away on Rod Laver Arena, the noise as Kyrgios dropped to the ground in victory prompted Andy Murray, deep in battle with Grigor Dimitrov at the time, to motion to his coaches on the sidelines asking what all the fuss was about. "You never see this in a Slam. Never," commentator Jim Courier was moved to say of the atmosphere.

Nick continued the social storm. "I have five mins to kill," he randomly tweeted to his followers the night before that match. "Quick Q&A? I'll answer as many as I can....... GO!" To his word, he fired wittily back and forth with his fans on everything from his favourite song to his ultimate dream. All very laid back.

The Kyrgios-Murray quarterfinal was hyped in the Australian media to unprecedented levels. The first Australian male to that stage of the tournament in a decade. And it was Nick. It was non-stop. Channel Seven even ran a countdown clock.

The match itself was worthy viewing but not earth-shattering; Murray ending the Australian's hopes of an unlikely title in three close sets. Order was restored.

Much was made of Kyrgios' back -- and with some merit -- he immediately withdrew from tournaments in Marseille and Dubai with bone-stress and will likely make his next appearance playing Davis Cup later in the year.

But what a run -- Kyrgios has now made two Grand Slam quarterfinals as a teenager. The last to do so? Messrs Nadal and Federer. And not just that, this kid has already done it while only ever winning a single match at ATP level. That's right. One. The air up there is his alone.

This post originally appeared on The Good Men Project