Ask anyone about their study abroad experience, and they will tell you it was nothing short of amazing. But there is a secret to making it even better -- volunteering. 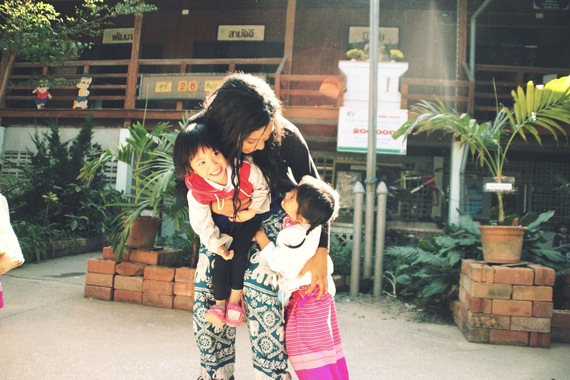 I took my first trip abroad to Thailand this past December and found myself bringing in the New Year in a new country with new friends and an interesting new perspective on life. I spent nearly three weeks stepping out of my comfort zone, exploring the land, riding elephants, feeding monks, shopping in night markets, learning a new language and appreciating new foods and culture. While the spices of Thailand tickled my tongue and the temples sparked an interest for learning, I can't begin to tell you about my trip without telling you about the lives I tried to touch and how they touched me.

I traveled to Thailand with 17 other amazing American students who decided to give up their entire winter break, including Christmas and New Years to help those in need. We partnered with an organization called Travel to Teach, and together we headed to two different schools in Chiang Mai. We had the opportunity to work with primary school children from poor backgrounds, who didn't have much. It was at one school where I came across a teenage boy who gave himself that nickname, Laos. He fled from Burma with his family, hoping to get a better life in Thailand. I would soon learn that he was among dozens of other children in the same position. At his school, more than 90 percent of the children were Burma refugees or children of Burma refugees. For nearly all of them, we were the first Westerners they had ever seen.

Laos was taken back by our differences and was stunned to learn that we had traveled across the world to teach. Although he was a teenager, he was in classes with children who were two to three years younger than him. He knew the most English out of everyone in the group, often translating for the rest of the students. Laos took such pride in school, he was happy to be there and looked forward to learning as much as he could. For the next week I would work with him and dozens of other students, teaching English and helping with tasks around the school. While many of the students impressed me as students in the classroom, I was more impressed by the conditions in which they lived in and how they got to school. 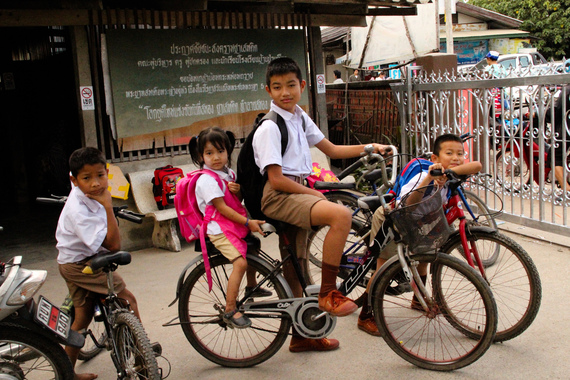 At the end of the first school day, I walked with Laos and several students down to the driveway, where I assumed they would be picked up by their parents and taken home. Laos waited for his little sister, who was several years younger and also attended the school. As he waited, he told me that the two bike nearly an hour just to get to school. He told me his sister rode on the back of his bike, while he pedaled all the way home. I began to wonder how the other children arrived to school and how they got back home. I turned around and saw dozens of children piling into a van and dozens of others climbing into the back of a pick up truck. I sat there and counted, watching as 16 kids got into one van. I looked inside and noticed how they were all packed in together, none wearing seat belts. Yet, they didn't seem to mind. These young girls and boys weren't complaining about the time it took to get to school, their family conditions or even the fact that they had to go to school. Rather, they were eager to get an education and delighted that a group of "Westerners," as they called us, had traveled thousands of miles just to be with them. 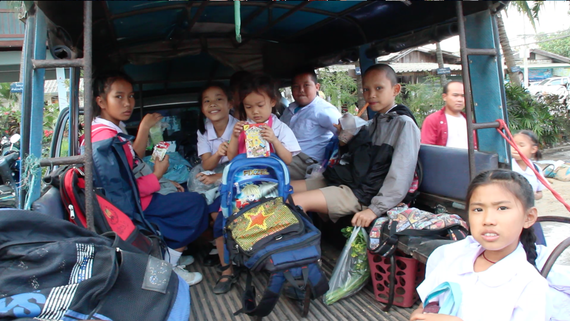 We were just as delighted to meet them and excited to help in whatever way we could. We taught them English, an important skill to have in order to move up in Thai culture. Learning English not only gives a way for Thais a way to compete in tourism, one of the country's main industries but it can also give access for students to attend international schools and gain other educational opportunities. We helped rebuild their school -- building a water fountain, painting classrooms, building a wall to block out the noise from the street and donated money to help sustain the institution.

Despite the language barrier, it was amazing how much we could communicate without saying much at all. Many of us came to Thailand to help those in need but in the end we were the ones that perhaps received the most. We each developed our own relationships with the children and they left lasting impressions.

"One of the students that I got attached to was little Fai," Juan Ramirez, a student-volunteer on the trip said. "Fai was around the age of 10 and was one of the shyer kids," he continued. For several days, Juan worked with Fai teaching her English and working on her vocabulary. "I remember the last day of school was so sad, especially when I had to say goodbye to Fai. I saw her eyes tearing up," he said. The experience changed Juan's perspective on his own education. "There have been times where I complained about our public schools," he said. "There were times when a child's textbook was falling apart or their pen would barely write. Even though they had so little, they still seem so grateful. It just brings into perspective that material possessions don't bring happiness," he said. 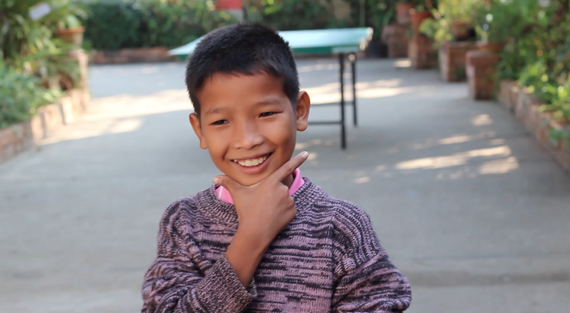 Perspective was perhaps one the greatest gifts I received from the children in Thailand. I can go on and on about things they didn't have but what was even more remarkable, is what they did have. They had happiness, joy and were full of life. They were respectful of each other, their elders and protected those who were younger than them. The children of Thailand were fearless, caring little about material objects and more about human interaction. As we left, I couldn't help but feel so incredibly thankful for how they helped me and how much they pushed me to be a better individual. Just when I thought I couldn't be more surprised by their strength, kindness and endurance, I was wrong.

On the last day at the school, two students who nicknamed themselves Nooey and June ran up to me with gifts. Before giving me a tight hug, they handed me a flower and a bear. They both began to cry. Yet again, I was amazed. The two little girls, who had almost nothing still found something to give. They didn't have money to buy anything so instead they gave me their own personal belongings to show their gratitude. It was about the gift that meant so much to me but the gesture that made all the difference.

So I urge you not to just go abroad but to volunteer abroad. Push yourself out of your comfort zone and away from the typical tourist experience. It will be challenging, in many cases a culture shock -- but it will reward you a thousand times over. As student volunteer Sahil Dhailwal said, "It's sometimes so easy to forget that other nations and millions of other people with other languages, customs and traditions exist. This experience definitely opened up my interest in wanting to travel more and continue doing service."

So take the road less traveled -- explore, volunteer and open up your mind. You'll learn that service is a two-way street and you may be surprised with who receives the most at the end.