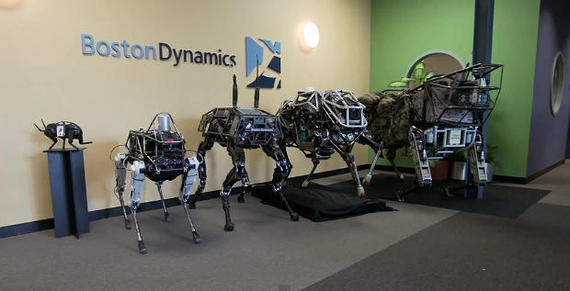 I've worked in the high tech industry for almost 35 years, and am generally a fan of technological change. The google robot dog does give me pause for thought, though. Watch the video at the end of this post, it's amazing. This "dog" adapts to changes in terrain. When pushed or kicked, it can recover its balance. And its movements are eerily similar to those of a real dog. This robot dog is not a first, but rather the latest in a series of increasingly functional machines being built to enhance or replace tasks currently performed by humans.

I'm also a long time science fiction fan. And in science fiction, when the technologists ignore the full implications of their innovations, the human race doesn't fare so well. Anybody who's watched the Terminator movies knows that. Even technology luminaries like Stephen Hawking, Bill Gates and Elon Musk have issued warnings about the dangers of artificial intelligence - specifically that our inventions could quickly outstrip our ability to control them. We want the benefits, but we're afraid of what we might give up to get them. We don't know whether to embrace new technology or run from it - and the same could probably be said for new technology implementations at your business.

Change is hard for most of us, especially at work. We hit a groove, and that groove is mostly comfortable. We know the drill, we do the job, and as long as everybody follows established procedures, we can maintain the status quo. Of course, we can't avoid change indefinitely. Customers' needs change. Competitors move in to meet those needs. And we have to respond. If we don't respond quickly enough, we jeopardize the future viability of the organization. If we respond too quickly, we can run smack into a wall of unintended consequences at odds with our intentions.

Every enterprise software organization I've worked for created technology that could drive significant benefits for the buyers - as long as they were willing to make some changes within their organizations. And every one of those buyers worried about the unintended consequences that might result from changing the way they operated in order to take advantage of new technologies.

Because what derails the adoption of new technology in a workplace generally isn't whether it works according to specifications, but rather whether it works for the people who have to use it every day. Organizations generally invest a lot of energy in the purchase process - evaluating multiple vendors, seeing lots of demonstrations, and having the attorneys hammer away at each other to cover every contingency in the contract process. Unfortunately, many don't spend as much time as they should planning for how they'll help their employees embrace the changes the new technology will bring with it.

The organizations that get the most value out of their technology investments are those that plan for change. There are lots of change management experts and protocols out there, but most boil down to a few common principles:

In this podcast I recorded with CFO Jim Thompson of Cavender's, a western wear retailer, he talks about the importance of compassion for your people in driving successful change. Meet them where they are, and help them walk before they run. Take a lesson from the creators of the robot dog. When you plan for resilience, you can take a shot without falling down.