On Palm Sunday at St. Mark's in the Bowery, we end our service with the Passion reading, the story of Jesus' last days and his crucifixion. We walk out of the service and pick up bamboo crosses and t-shirts to "plant" the yard with a commemoration of deaths in the past year.

This year the t-shirts represent children 11 years old and younger who have been killed with a gun since Easter of 2014. The sign explaining the installation will not go up until Tuesday, because it has been hard to find the right language. We agreed to: 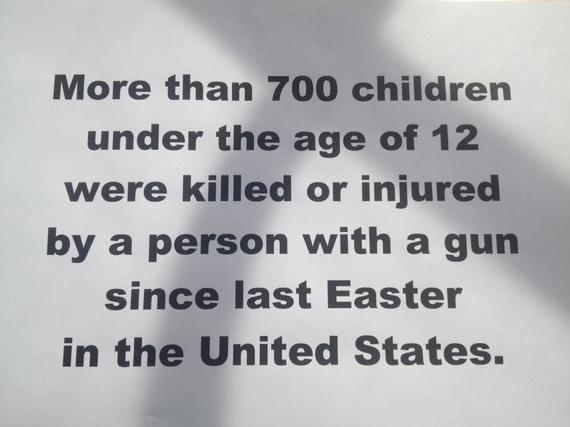 The language is awkward. It hurts my pride not to be more eloquent, especially when it will be elegantly printed on vinyl. We think it had to be awkward because we wanted to be clear that it is not as though guns grew legs or wings and went after our children. We could not just say "killed with a gun," there were people involved. Someone bought a gun. We also do not mean to say that people who happened to be carrying guns murdered children in some other grizzly way that did not include using a gun. It is awkward because the only statistics we could find put injuries and deaths together, and we did not have the fortitude to sift through them to count only the deaths, and we know that no list is comprehensive.

The shirts in our yard are only for deaths. There will be about 75 of them again this year.

If you are worried that Holy Week is too abstract in your church, I can recommend illustrating death, specifically those we can prevent with political will that would involve taking on a fundamental assumption of the state, those deaths that feel like sacrifices to an angry god.

I am writing this watching people walk by; stop to read the shirts through the old iron fence rails; take pictures; and call friends.

We are two blocks from the buildings that burned and collapsed in the East Village last week. Like many in our neighborhood, I watched the fire close up. It has made me feel fiercely protective of this little patch of New York City. The loss seems reckless and unnecessary like these little ones aged 2, 3 or 5 whose enraged parent, innocent friend, or vengeful stranger murdered them. I hope those standing at our fences on 2nd Ave today taking pictures and video for social media will feel equally protective of our children.

Holy Week reminds us that God comes to us in the Christian tradition as one whose death was legal. Crucifixion was an intentional act of the Roman Empire to keep Jews in their place: occupied; terrified; and vulnerable to random violence. Jesus resists by showing up in Jerusalem itself and challenging Rome, as someone with no authority to do so, by simply proclaiming freely the liberation God promises. By reminding his own people of their dignity in the eyes of their Creator, he brought the fury of the Roman state down upon himself.

We Christians call Jesus an innocent victim; a love to great for this world; and all kinds of other theological yet sometimes apolitical language that can cause us to forget that in the case of his death, it was the state that murdered him. In a democracy, we the people choose our representatives and in effect are the state. We decide what is legal; what has value; and what is harmful. It seems to be a behavior of the state to convince us that we should grieve in silence and cower at the power of those who threaten us with death or humiliation. Jesus tells us something different.

The question for us is whether these 700 injuries and deaths are acceptable, the unavoidable cost of the right to bear arms, or if they are an unacceptable sacrifice to an industry that is trying to convince us that a sacrifice acceptable for the 2nd amendment is our children.