Harrison Ford is still recovering from the numerous injuries he sustained about three weeks ago after a rough emergency landing in his vintage World War II-era airplane on a golf course near the Santa Monica Airport. He could have been killed, as an alarming number of amateur pilots and their passengers are. So I'm wondering if the beloved actor's accident might be one of those celebrity mishaps that becomes a teachable moment, for groundlings and private aviators alike.

Like millions of others, I wish Harrison Ford a speedy and full recovery, but if any lessons are to be learned or policies changed to reduce the number of people injured or killed in private plane accidents, it might help if Ford himself stepped up to play a leading role -- whether you believe that U.S. government and industry efforts to keep fliers safe are woefully inadequate, as a recent USA Today investigation concluded, or that those efforts are on the right course, as aviation industry backers contend.

Either way, as I've been finding out since Ford's close call, there seems to be plenty of room for improvement. One troubling measure is that the death toll from private plane crashes has remained stubbornly consistent, a stark contrast to how fatal accidents involving U.S. commercial airliners have become almost nonexistent -- though of course the recent shocking crash of the Germanwings passenger jet in the French Alps has sent fresh shudders through the world's commercial carriers and air travelers everywhere.

But private planes and jets, besides being far greater in number than their commercial counterparts in the American civil air fleet, operate under substantially different rules, and Harrison Ford's well-established passion for planes and industry involvement would make him more than a fly-by-night celebrity spokesman for improving flight safety.

The actor learned to fly about 20 years ago and nowadays regularly pilots both airplanes and helicopters. He's even come to the aerial rescue of a couple of lost hikers, including a Boy Scout. The Aircraft Owners and Pilots Association, a leading advocacy group whose motto is "protecting your freedom to fly," gives out a Harrison Ford Legacy in Aviation Award.

Ford has served as chairman of the Experimental Aircraft Association's Young Eagles program, which takes kids on plane rides to give them "a chance to experience the freedom and responsibilities that attend to flying an airplane," as Ford once told CBS. And you'll be able to hear the actor's familiar voice as he narrates a soon-to-be released National Geographic Studios documentary called Living in the Age of Airplanes, whose producers must be especially relieved that Harrison Ford is still living in the age of airplanes.

Ford's single-engine Ryan Aeronautical ST3KR, also known as a PT-22 Recruit, was originally built for training military pilots around the time that Ford, 72, was born. While older than most private planes, this PT-22 was said to be in tip-top shape, although obviously something went wrong and National Transportation Safety Board investigators, as they do after every crash, are now examining the plane's engine and crumpled fuselage before issuing a final report, which typically takes a while.

This close call, while apparently Ford's worst, was not his first, and an awful lot of private pilots and their passengers have not only been injured but killed -- a tragic roster of hundreds that includes the many stars who have fallen from the sky.

We all take risks to one degree or another with our modern modes of transportation and outdoor hobbies, but in a safety-minded society where backup systems abound and helmets are de rigueur for just about any activity deemed more perilous than walking, the world of "general aviation" seems sluggish in changing its ways.

As the name implies, general aviation is a vast category that basically includes any aircraft that's not commercial or military, which means everything from funky single-seat experimental planes to large, multi-million-dollar corporate jets, a total of around 220,000 aircrafts. That's about 90 percent of all U.S. civil aircrafts, and three out of every four takeoffs and landings at U.S. airports are by general aviation aircraft, according to a Federal Aviation Administration report of May 2012 on the nation's general aviation airports.

Most of these comings and goings happen at the nation's nearly 3,000 general aviation airports found in places like Santa Monica, or, say, suburban Maryland, not far from Washington, D.C., where just a few months ago, shortly before Christmas, a six-seater corporate jet slammed into a cul-de-sac, killing the experienced pilot and two passengers, and also a 36-year-old mother and two of her three young children, a toddler and a newborn, who were at home that morning on Drop Forge Lane.

Most flight-related fatalities in the U.S., about nine out of 10 in 2011, are attributable to general aviation, according to the NTSB. Especially noteworthy among the statistics is that the vast majority of accidents stem from personal operations -- flying for fun, as enthusiasts like Ford often do, as opposed to flying for instructional, business or corporate purposes. 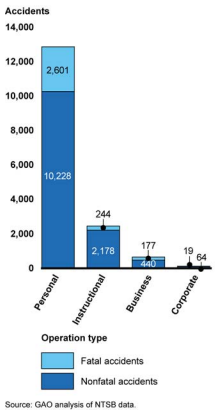 Within the category of personal operations, single-engine piston planes are the type most commonly flown by pilots holding private pilot certifications and flying for personal reasons. The PT-22 Recruit in which Ford crash-landed was a single-engine piston plane, and this engine type has been involved in almost three-quarters of nonfatal general aviation accidents and 60 percent of fatal accidents, according to a 40-page report on general aviation safety for the years 1999 to 2011 by the U.S. Government Accountability Office, the independent, nonpartisan congressional watchdog.

If you read over the big-picture findings of this October 2012 report, the most recent analysis of its kind, and you take a look at the finer points of individual accident reports prepared by the National Transportation Safety Board, it's hard not to come away with the impression that general aviation, with its many varieties of aircraft and wide range of pilot skills, has something in common with Mos Eisley, that dubious Star Wars spaceport where -- need I say it? -- audiences first met Harrison Ford as the rascally but reliable pilot Han Solo.

It also seems as though the politics of general aviation are such that asking Harrison Ford to become a full-fledged champion for flight safety might be like asking the legendary actor Charlton Heston to say a few kind words about gun control. Then again, Ford's landing on the golf course, right next to so many surrounding homes, could be the kind of experience that gives him reason to take up a cause he might not otherwise have taken up, sort of like how Han Solo got roped into striking back against the Empire.

Accidents involving airplanes in the general aviation category have, with just a few bumps, been on the decline from 1999 through 2011, the GAO report found. Nonfatal accidents fell from 1,265 in 1999 to 902 in 2011. Fatal accidents dropped from 282 to 214. While just over half of all accidents, about 56 percent, resulted in no injuries, there were still more than 200 fatal accidents in each year reviewed, and a total of 3,331 deaths through 2011, the last year analyzed in the report, and there have been about another 600 deaths since then, according to FAA records.

So the trend in fatal accidents still appears to be holding steady rather than mirroring the sharp decline in the number of commercial airline fatalities or, for that matter, in the number of automobile fatalities over the same years. And personal operations accounted for about three-quarters of both nonfatal and fatal general aviation accidents, a rate that's been stubbornly consistent for nearly two decades, the GAO report said, despite some official efforts to bring it down. 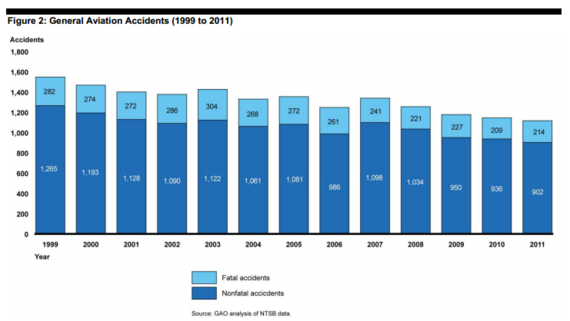 But general aviation rules are still considerably more loose than the rules for commercial airlines, which makes the risks much higher, journalist Damian Fowler wrote last summer in a New York Times op-ed. Fowler is the author of the recent book Falling Through Clouds: A Story of Survival, Love, and Liability, about the crash of a twin-engine plane in 2003 near Lake Superior. One little girl found alive amid the wreckage startled her rescuer when she said: "Mommy burned up." Bad weather was a contributing factor, as it often is in accidents involving pilot error, and that's one of the safety issues the FAA has tried to address. Another issue, Fowler wrote, is that general aviation pilots can be certified to fly a given type of aircraft with relatively few flying hours.

So now when I hear the droning growls of small planes and the whining and whooshing of private jets, as anyone who lives around a general aviation airport can, I can't help thinking that Harrison Ford, once he's all healed up, could use his formidable star power to make our skies a safer place.