Time was when barrel-aging spirits was a strict two-way collaboration between Mother Nature and Father Time. Well, that's all about to change.

Sure, you've had small distilleries without sufficient time or cash for proper aging try to hack the system by aging their product in smaller barrels, the theory being that more of the spirit comes in contact with the wood, thus aging it faster. Scotch whisky makers, running out of aged stocks, have experimented with blending older and younger expressions, putting them out without age statements, and hoping nobody would notice. And some American craft distilleries have thrown up their hands and simply decided to make un-aged "white dog" whiskey, moonshine, or worse yet, vodka.

But in a small distillery in Monterey, Bryan Davis has been quietly working to upend the spirits business as we know it. For the past year and change, Davis has been churning out intensely flavorful, ultra-high proof dark rums -- four of them to date -- under the Lost Spirits banner. For any other rum maker, Lost Spirits' rums would be a career pinnacle. But they're only the by-product of what Davis has really been working on for the last seven years. Using a prototype reactor he made himself, Davis has created rums that, in both their chemical and flavor profiles, appear to be 15-20 years old. And he's done it in six days. This summer, he's beta-testing his patented reactor at five thus far unnamed distilleries, with the goal of having the technology widely available by next year. 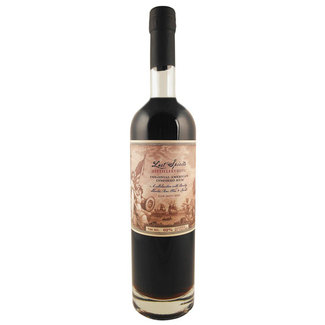 Davis didn't come to his eureka moment from a traditional chemist's background. "I actually never even took chemistry in high school," he says. "I have an art degree, and the art degree got me to an absinthe distillery." As co-founder and distiller of Obsello Absinthe, based in Spain, he got curious about the distilling and aging process. "So I started studying distillation and basic organic chemistry just on my own, as kind of my private independent study thing." The "thing" got him interested in how to fine-tune the aging process, and after he sold the distillery and moved back to the U.S., he started experimenting in his kitchen. "I didn't know what I was doing," he says. "I just knew that this was generating some of the flavor that I would recognize in the aged spirit. And with a lot more reading I managed to figure out what I had actually done.... It took a long time figuring out, what is the problem I actually need to fix? Finding the answer came much easier than finding the question."

I'm no chemist, so I'm not even going to try to explain the more sophisticated points of Davis' process to you. Besides, he's happy to talk at great length and in great detail to anyone who's interested in what he's doing. But the basics are this -- as booze ages, chemical reactions take place both in the liquid and in the wood. In the liquid, acids and phenols are binding with ethanol to create molecules with the flavors and aromas we recognize in aged spirits, a process known as esterification. While this happens, the wood in the barrel is gradually breaking down and releasing other chemicals into the mix. So Davis had to figure out how speed up both the esterification and the breakdown of the wood. The first part, accelerated esterification, he figured out pretty quickly. The second part was more tricky.

"The wood wants to go through a decomposition process in the ethanol like a person aging," he explains. "It wants to decompose very gradually, in a way that gives all of these different things at different stages of its life, if you will. And sort of getting it to live its entire set of stages all at once was the trick. And I really just sort of stumbled my way on to it. "

Throughout the process, Davis has been churning out booze -- first peated whiskeys, and now dark rums -- that turned heads based on how they tasted, not how they were made, which he wasn't revealing anyway. Only now is he revealing that they were nothing more than experiments in rapid aging. And failed experiments, if you ask Davis, no matter how delicious they are. "The [Lost Spirits] Navy Style rum, we had it [the wood] breaking apart sort of similar to the right way. And then in the Polynesian, we had it breaking apart in exactly the opposite way as it was in the Navy. They were interesting products, but they were totally out of whack, like, not anything nature could ever make. The Colonial [American Inspired] was where we finally got the wood to break apart in the right way." Having tried all of them before I ever knew what Davis was up to, I can attest to the excellence of all three, my favorite being the Navy Style rum. It's the smoothest, most flavorful, easiest 136-proof rum you'll ever drink.

But back to our story. Having perfected his methodology, Davis started shopping around his "Model 1" reactor. In an industry noted for its emphasis on tradition, he expected some pushback, and he got it, namely from the American Distilling Institute, which calls itself "The Voice of Craft Distilling." During a two-plus hour talk, he met with pretty stiff resistance. "It was important to me to actually win this stupid argument," he says, laughing. "They were still driving me batshit, and I was like, you do realize that I'm offering to give your ragtag rebel army nuclear weapons, right? You do realize that's the point of this conversation? And they just sort of shut up for a minute and said, maybe you're right, and then we could start having an intelligent conversation."

So what does this all mean for the spirits industry? You'll probably see the biggest difference with the smaller distilleries, the ones who currently rush their immature products to market because they don't have the funds to let it sit and properly age for years. With rapid aging, they'll be able to make a much better product and sell it for less. But bigger distilleries can also use it to make much higher quality bottom-shelf booze as well. And now it will be a whole lot easier for distillers to experiment with new techniques and ideas; rather than waiting years to find out how things turn out, they can get a finished product in a week. We should expect some truly radical spirits to follow close on the heels of Davis' Model 1 reactor.

The technology itself, despite the holy-crap factor, is still somewhat limited; right now, it can chemically replicate 15-20 year old liquor, but nothing younger or older. Davis expects that before long, other people will figure out how to do the same thing he's doing, but using different methods "There's probably 10 different ways to do it that other people will find, but it's based on what you're looking at. It'll be some guy who studies insects, who also has an obsession with this, who'll stumble his way on how to do it from a biological route, you know what I mean? Discovery is just training yourself to know what to look for so you know when you've succeeded."