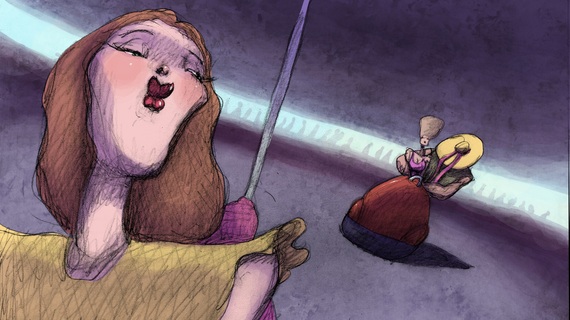 Ella loses her hat in Cheatin'

Bill Plympton is not a genius, or so he insists, although none of his thousands of fans would be shocked if a MacArthur "Genius Grant" came his way. This former contributor to Playboy, The New York Times, and MTV has been a cult cartoonist and animator now for over a quarter of century, garnering an Oscar nomination in 1987 for his short "Your Face." 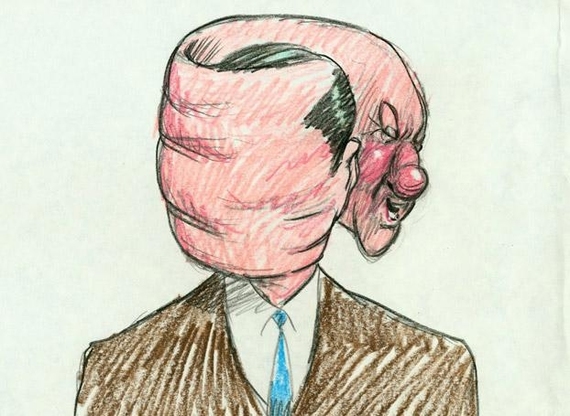 An image from Bill Plympton's Your Face.

"Your Face" showcases a middle-aged man in a business suit with a pencil moustache singing a love tune as his head constantly metamorphoses. His mouth first travels to his forehead, then all of his facial features somersault before his skull twists up like a corkscrew and breaks apart, then reunites. The Exorcist's Linda Blair would be jealous. These transmutations continue, all in vibrating lines, until the camera steps back and showcases the singer sitting in a chair on a barren Earth that eventually develops a mouth and swallows him up.

While the legendary R. Crumb mostly focused on hippies before he took on Genesis, Plympton, whose humor is equally if not more perverse, often lampoons the suited warriors of civilization. He even insists "Walt Disney would turn over in his freezer" if the mastermind of Donald Duck ever perused this underground satirist's output.

Seated in his Chelsea office, the size of a Disney broom closet, with his workers scurrying here and yon, Plympton is like a peasant king gaily issuing decrees to keep his Lilliputian kingdom functioning and his courtiers merry.

Today besides his daily chores, he's juggling radio, internet, and print interviewers to promote Cheatin', his latest prize-winning animation about a great love between Ella, a beautiful book reader, and Jake, a hypermuscular gasoline attendant. The biceped wonder saves the literary damsel's life when her bumper car malfunctions at a carnival, they wed, and all is ardent kisses. So much so that even at breakfast, Jake and Ella sing an impassioned "Brindisi" from La Traviata as their eggs get hard-boiled, their percolator overflows, and dozens of imaginary babies pop out of whatever imaginary babies pop out of. 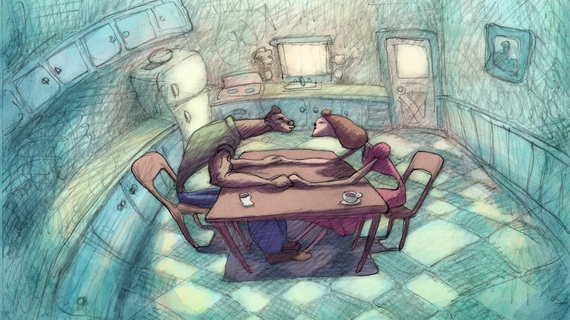 Love at the breakfast table in Cheatin'

All goes dreamily for the duo until a misleading photograph sullies Ella's reputation and Jake goes ballistic, drinking and copulating unnamed damsels night after night after night. Oh, no! Is their great love kaput? And will this poor, distraught wife murder her spouse out of despair or will she locate a magician with a transmigrating time machine to save the day? My lips are sealed, except for the fact the visuals are consistently brilliant, Plympton's delving into human nature is unparalleled in recent animation, and the imaginative conceits that spit forth without respite are very near mind-blowing. He's a Rube Goldberg of the psyche.

But is Cheatin' a silent film since it lacks conversation?

"No, don't say that!" insists Plympton. "It's a musical without dialogue. People say it's silent, but it's not. It's got tons of sound. Tons of music."

However, the characters relay meaning mostly with their gestures, their eyes, their mouths, not unlike Buster Keaton and Charlie Chaplin.

"Oh, yeah. I love those guys," Plympton says. "They're brilliant. I'll tell you why I made it without dialogue. There are three reasons. One, that it's very expensive to do subtitling and dubbing if you sell overseas, and I have a lot of markets overseas. Number two, I'm really terrible at writing dialogue. I don't know how to write dialogue, a good conversation that is witty and sharp. And number three, I just think it's more poetic to tell a story through visuals and music, the head gestures, the eyes, the hands, the things like that. I think it's more powerful to tell a story without dialogue because oftentimes the dialogue is redundant. It repeats the same thing the body is communicating with the words. And why do that?"

Can't think of a reason. As for the opening of Cheatin', it's very reminiscent of the films of Federico Fellini, the close-up scanning of the faces of the masses, one more extraordinary than the next in their oddities and solipsism. 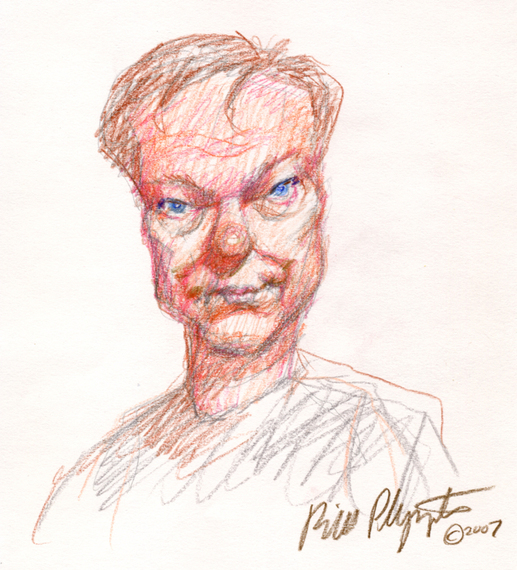 "Well, Fellini was a cartoonist," Plympton notes. "Oh yeah, yeah. He did a lot of cartoons of sexy women. And so maybe I'm him reborn. And David Lynch. These are people who influenced me a lot so I don't mind being compared to them."

Apparently, Cheatin' was inspired by a relationship Plympton had 15 years ago, yet Jake seems a bit more sinewy than his creator.

"That's my ideal. I wish I could look like that guy."

As for the tantalizing females you draw, you seem a connoisseur of the womanly form.

"Like Fellini," Plympton explains, "I love drawing female physiques and faces. You know it's funny, someone mentioned earlier today that Ella's face was not the typical beautiful face. If you saw a Disney film, it's usually a large top of the head, big eyes and no chin, and a mouth that is way down here by the lower part of the chin. Because that's like the baby part of the face with a big forehead and everything, and I went against type because I don't want to do a Disney film. I don't want to do a cutesy. I want to do more edgy, more darker type of characters. So I exaggerate the opposite. Big chin, small space between the eyes and the top of the head. And the eyes aren't big. They're very thin, very thin eyes. You don't see the eyeballs like Japanese animation. And the lips, it's not a big mouth. The lips are very narrow on mine. They are fat lips but very narrow. So I did the total opposite of the Disney archetype of the heroine, of the princess."

Very much so, especially with the intense copulation.

"I remember one distributor I showed the film to, he was a friend of mine, he said, 'This film has nudity in it' . . . like I had broken some rule or something. The code. And that's why I want this film to be popular. I want to break that stereotype that seems to be all over this country that animation and nudity do not go together."

As for Plympton's next feature, imagine if Hitler had his own version of Disney World called Naziland.

"Chaplin did The Great Dictator and Mel Brooks did The Producers so it's nothing new to make fun of Hitler, but we'll see what happens. I got my fingers crossed that I don't get assassinated."

(Cheatin' is currently playing in New York City with a national roll out to follow throughout April including: Chicago, San Francisco, Seattle, Minneapolis, Denver, and Portland. His book, Make Toons That Sell Without Selling Out, was released last year, and 15 hours of his older work is available for the first time on iTunes starting this month.)