On March 31, 2015, Cesar Chavez Day, Dr. Robert Atkinson of the Information Technology and Innovation Foundation (ITIF) published an article attacking my organization, the National Hispanic Media Coalition (NHMC), and me personally for our Net Neutrality advocacy. Atkinson alleged Cesar Chavez would have been unsupportive of our work. When I read that article more than a month ago, I dismissed it as being too silly to merit a response.

After all, I was raised in the small, impoverished border town of Calexico, California to a family of migrant farm workers. I spent the majority of my youth traveling the length of California picking whatever crop was in season, and years later boycotted and, like other former migrant farm workers, gave whatever money I could for Cesar Chavez to organize and take on the farmers to improve the difficult and dangerous conditions to which our families had been subjected. I doubt Atkinson shares a similar experience.

However, over the past week, the Multicultural Media, Telecom and Internet Council (MMTC), an organization that bills itself as "the leading advocate for minority participation in the communications industries," has revived the bigoted piece on ITIF's behalf - first by reposting it on their "Broadband and Social Justice" blog on April 30th and then by blasting it to thousands of email subscribers a week after that. 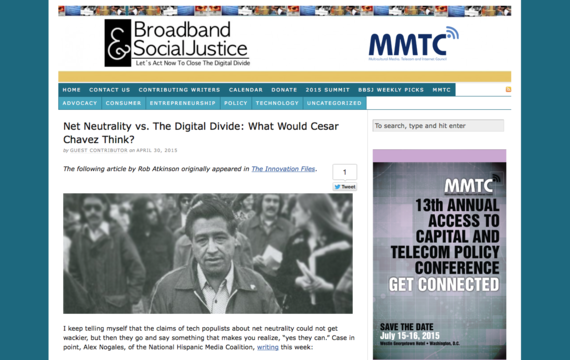 NHMC and I have had a long relationship with MMTC. I am a former Board Member and am still listed as a member of MMTC's Board of Advisors. I have followed closely MMTC's disgust with the paternalistic tone it feels often pervades critiques of its work.

Therefore, I was shocked it would republish and circulate a racially charged attack on me and NHMC perpetuated by ITIF of all organizations - an industry-funded group that is run by white males and has but one person of color on staff, and that recalls with longing the days in which the public was not engaged in tech and telecom policy debates. Especially an attack dripping with paternalism and condescension, containing statements like:

"If Cesar Chavez were alive, I wonder what he would say. How would a man who risked his life to ensure human and economic rights for millions of Hispanic farmworkers react when he sees the Hispanic rights movement now spending its valuable political capital on a 'yuppie' fight that is nothing but symbolism?"

"If the ... National Hispanic Media Coalition ... really cared about working class Americans and disadvantaged minorities they wouldn't waste their time on these Yuppie, feel-good digital issues. Rather, they'd spend their time on a real tech progressive issue - closing the digital divide."

It is incredible that Atkinson and ITIF would devalue the importance of the Open Internet in helping Latinos raise our voices in public discourse, after generations of exclusion from the media. It is condescending for him suggest how NHMC should spend its time and resources. It is ignorant for him to demean the years of work that NHMC has done to address the digital divide.

And it is shameful that MMTC would provide a megaphone to such an attack.

After all, MMTC's founder and former president, David Honig, has often chided these types of attacks, accusing opponents of claiming to know what is best for his organization and saying of their paternalistic critiques, "If we're not with them, we must be either too dense to understand these 'complicated' telecom policy issues, or we must be on the take."

After receiving complaints from some of its email subscribers, MMTC leadership informed me that the article was posted and, subsequently added to its email newsletter, in error. MMTC removed the article from its blog and I received a private apology via email.

Although I appreciate MMTC's remedial measures, I cannot accept this was an accident. And as MMTC's email blast was likely seen by thousands of people, I cannot allow it to go unaddressed. After all, it requires much more than an errant mouse click and a misunderstanding to dig up a month-old article and post it to two distribution platforms.

This hypocrisy, even if deemed an accident or mistake in hindsight, requires further explanation.

The truth is, contrary to what Atkinson has claimed, NHMC has always faithfully endeavored to represent our constituents by shaping federal policy with an eye towards greater diversity, participation, and the public interest. Unfortunately, all too often we have found MMTC standing steadfastly in our path, playing the role of antagonist or impediment. Facilitating the invocation of the name of Cesar Chavez to smear my organization is regrettable and does little to positively benefit MMTC's reputation.

Cesar Chavez opposed the corporate greed of farmers and understood the necessity of organizing many to raise a collective voice and effect real change - two values that Atkinson's piece failed to address and with which his organization disagrees, preferring instead to give in to the corporate greed of the telecommunications industry and calling it a greater good. Another irony here is that, were Chavez alive today, he undoubtedly would understand that Net Neutrality is critical to organizing and lifting up farmworker voices in the struggle.

The real question after this episode is: where does MMTC stand? Why did it extend the reach of such a bigoted, off-base article written by a known industry mouthpiece? Is the decision to publish such an article, even if later rescinded, an indication of alignment with its author or acceptance of his values? And how do those values help advance the cause of communities of color in tech and telecom policy?

Today, the answers to those questions are unclear. As a member of MMTC's Board of Advisors, I strongly advise its leadership to answer my questions and recommit to living up to the organization's mission. Giving voice to petty, racially-insensitive smear campaigns perpetuated by non-diverse organizations is not the way to do it.