"An ounce of prevention is worth a pound of cure" takes on a whole new meaning when you consider reducing sodium in the food supply -- a public health measure already well recognized as likely to prevent tens of thousands of deaths each year from cardiovascular disease alone in the United States.

Now, a new analysis by the Center for Science in the Public Interest shows that reducing our average salt intake by half a teaspoon a day could save some states hundreds of millions of dollars a year in reduced health care costs.

Using published research on national health care cost savings from sodium reduction and adjusting for inflation and population growth, we estimate that four states -- California, Florida, New York, and Texas -- would each save more than $1 billion annually. The big winner is California at almost $2.4 billion.

Eight other states would stand to save between $500 million and $1 billion a year: Georgia, Illinois, Michigan, New Jersey, North Carolina, Ohio, Pennsylvania, and Virginia.

All that for a half teaspoon of salt a day. 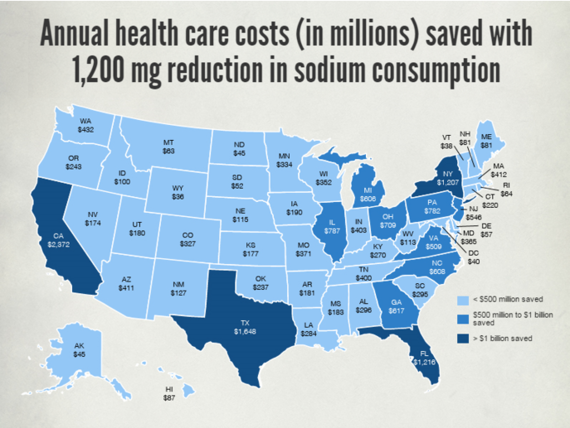 This recommended reduction is not new. For more than 40 years public health experts and scientists have been sounding the alarm on how much sodium Americans consume. And, for at least 25 years, the needle has not budged according to intake estimates from the federal NHANES surveys. 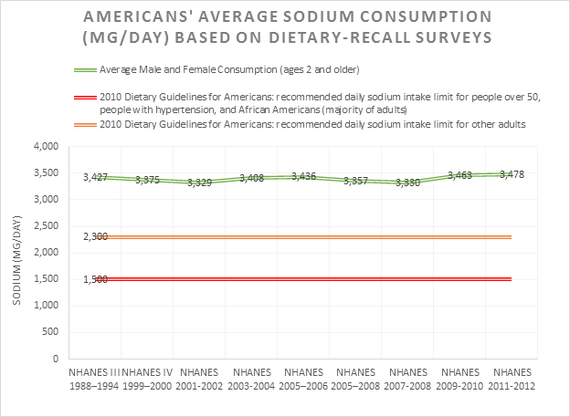 We continue to consume around 3,500 mg/day of sodium (or a teaspoon and a half of salt). The Scientific Report of the 2015 Dietary Guidelines Advisory Committee calls for a reduction of 1,200 mg/day, for a daily limit of 2,300 mg/day. At-risk populations, including adults 51 years and older, and those of any age, including children, who are African American or have high blood pressure, diabetes, or chronic kidney disease, are recommended to reduce sodium consumption to 1,500 mg/day. These specific populations account for about half of the U.S. population and the majority of adults.

Why has it been so hard to lose that half teaspoon?

Because it's not a matter of individual choice. Almost 80 percent of the sodium we consume comes from processed and restaurant foods. That antibiotic-free chicken burrito with brown rice, black beans, fresh tomato salsa, and romaine lettuce you just ordered at Chipotle because it's healthy for you? It has almost three-quarters of your daily-recommended limit for sodium (1,635 mg). And if you added some guacamole, that would boost the sodium to 2,010 mg -- almost 90 percent of your daily limit.

Or take that half cup of Ragu's Traditional Tomato Sauce. The good news is that its 480 mg of sodium (more than 20 percent of your daily limit) is down substantially from a decade ago. On the other hand, Amy's Organic Family Marinara Pasta Sauce comes in at 590 mg of sodium and has not improved over the past decade.

That's why it's high time for the Food and Drug Administration to level the playing field for the food industry and finally follow the 2010 Institute of Medicine recommendations to gradually reduce sodium in the food supply over time. Until the FDA acts on sodium reduction, they'll continue to be responsible for the loss of billions of health care dollars and hundreds of thousands of lives.

Executive Director, Center for Science in the Public Interest