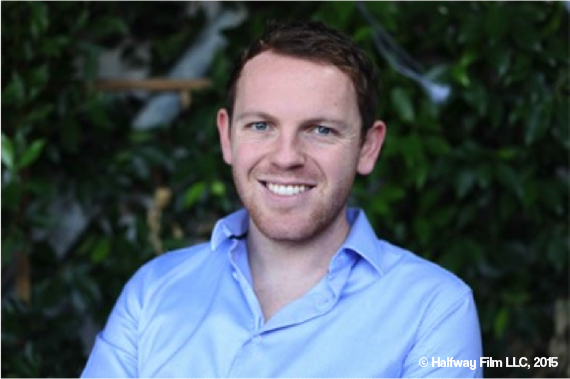 In chatting last week with Jonny Paterson, producer of Halfway, I found that he had so many interesting thoughts, I had to break up my post into several posts!

The first post addressed the movie itself. In this post, I chat with Jonny more about his own career and work. Still to come are Q&As with Ben Caird, writer/director of the film, and Quinton Aaron, star of Halfway.

Be sure to scroll to the end to find out where you can find Halfway online!

Thank you, Jonny, for being so generous with your time and thoughts!

Q: Can you give me a general overview of your background?

A: I studied at the University of Leeds to get a BA in English Literature and History (Joint Honors) and then went to Carnegie Mellon University to get a Master in Entertainment Industry Management. I worked at a talent agency called ICM briefly before moving on to Lionsgate Entertainment, then I got my job working for Paula Wagner. I assisted her for a year before setting up my own production company, JP International Productions in 2013. I also sit on the board of UK-based charity Football Aid where I have been a non-Executive director for the past five years. The charity was formed in 2001 and has a focus on raising funds to put towards finding a cure for Juvenile Type-1 diabetes. I myself am a Type-1 diabetic. 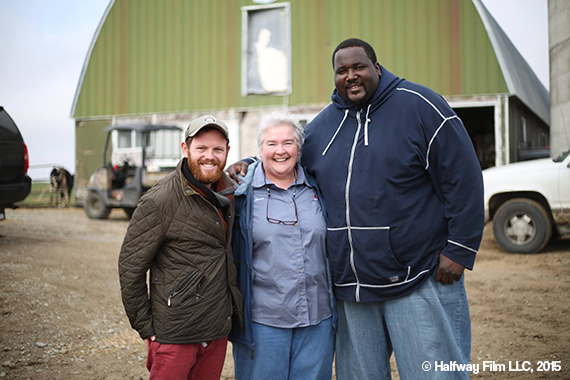 Q: What first sparked your interest in films and the entertainment industry?

A: The truth is, coming from a wee country like Scotland, I never really thought having a career in "Hollywood" was realistically attainable. I've always been ambitious, but that career path still seemed a bit fantastical. However, as I was preparing to graduate during the recession in 2010, my job prospects were pretty bleak (as was the case for most graduates with liberal arts degrees at the time!). So I started looking further afield and came across a great program at Carnegie Mellon University, which would allow me to get a business degree at the same time as working in an internship capacity in Hollywood. The truth is, when I made it on to that program and subsequently moved to California after a year in Pittsburgh, I still didn't know what my calling was going to be career-wise, but I was definitely excited to go on the ride and find out.

Q: What sparked your interest in being a producer?

A: Things started to take shape when I got a call from a friend of mine who was Paula Wagner's assistant saying a position was opening up at her company and she'd like to put me forward for it. The opportunity to learn from someone like Paula was really huge for me, and her reputation as one of the top producers in the industry is renowned. I worked for Paula for a year and got to see what it really meant to be a producer, and a great producer at that. I started to learn that unlike the last couple of places I had worked, where every day kind of felt the same, the total opposite applied to working in production where every hour through up a new set of things to deal with. I loved that it kept me on my feet all the time, and decided thereafter that it was indeed my calling and have been 100 percent focused on making a success out of myself ever since. 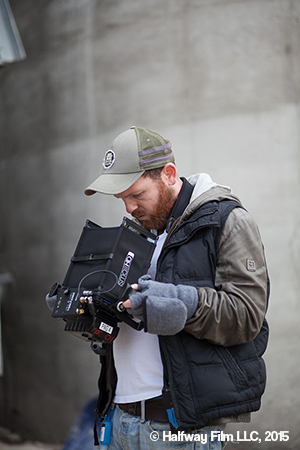 Q: What does a producer do, more specifically than "everything"?

A: The reason that producers often give the answer "everything" is because it's not actually that far from the truth! Or at the very least, they have a hand in every major decision that gets made from start to finish, so it always feels like "everything." However, to put that in the context of Halfway and to offer some examples, my function on the project ranged from finding the source material and "optioning" it (basically getting the exclusive right to produce the material), to bringing Quinton on board as our star and as an executive producer, to drawing up the budget and raising the money, to working out the logistics of getting everyone from LA/Chicago/NYC/London to a small town called Montfort in Wisconsin (a nightmare task!), and then, during production, running the set and making sure everyone had what they needed to do their jobs properly, especially Ben, the [writer and] director, whose vision it was we were all ultimately trying to bring to fruition.

Now that we are in post-production, I have a whole slew of new job functions, but I think you get the point. Basically, I am the only producer on the film and thus I have to take on all the responsibility to make sure the boat sails as smoothly as possible. 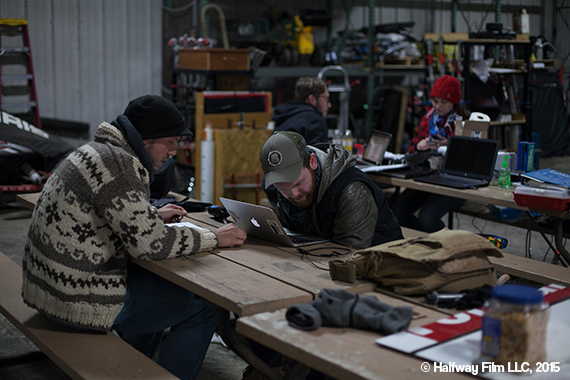 A: As I intimated in a previous answer, there is a lot of energy to be mined from doing a job that is constantly evolving and presenting different working parameters on a daily basis. I love waking up in the morning with but a few things on my schedule, yet knowing that by 9 a.m. I'm going to have a backlog of things I need to get done before the day's end. In a practical sense, in pre-production on Halfway I was very much learning on the job and taking things in my stride, but I can say fundamentally that no two days in a row were the same. Certainly there were successes and failures that overlapped with each other, but I was very much taking the bull by the horns and making things happen without having a blueprint as to how to achieve my goals. I was informed when getting in to production that "no two films are the same," which is to say that each time I work on a film I will inevitably come up against challenges that will be fresh and unique to anything I've done before. I'm really energised by that, and it forces me to focus more and work harder each and every day.

Over the past two years, the other thing that has been a pillar of my success thus far has been my desire and ability to find new talents. On Halfway that would be Ben Caird, on my next project that is someone else and so on and so forth, and that's incredibly exciting and something I love about producing.

As to what I don't love so much, at the risk of contradicting myself, there is an uncertainty about where your next project or pay check is coming from that at a certain point isn't going to be healthy for me. The film industry is notoriously slow moving and there is a great saying that those in my position will understand only too well, and that is that we are always "running so that we can walk." That is to say, we have short bursts (a week here, a week there) which provide fireworks and incredible jolts of energy for a project that you're involved with that is truly the most adrenalin-infused, exciting thing in the world. However, you get through that week and then things slow down and the realisation is that, yes, last week was awesome, but this week we need to stop and think, and then get on with the paperwork etc., and then eventually, weeks or months down the line, all the awesomeness of that one week will finally bear some fruits. Running to walk! 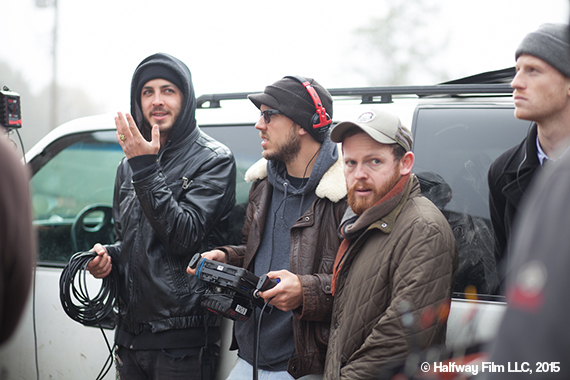 Q: What are your short- and long-term career goals?

A: Short term: Successfully guide Halfway through the remainder of the post-production process and towards a premier later this year/start of next year. Thereafter I have two projects in particular that I am focused on and would like to make, one, titled The Scavengers, that I'll be making in Ireland, and the second is one I can't divulge too much about at this stage, but would be a step up for me in terms of scope and commercial potential.

Long term: To build a company that affords a sustainable lifestyle for me and my family. That probably looks like one to two movies per year for the foreseeable future, and as I mentioned previously, I don't have particularly strict designs on scope or genre of film. I'd like to continue to make movies that I'm passionate about, whether they cost $1 million or $100 million. A nice blend of the two would be nice. 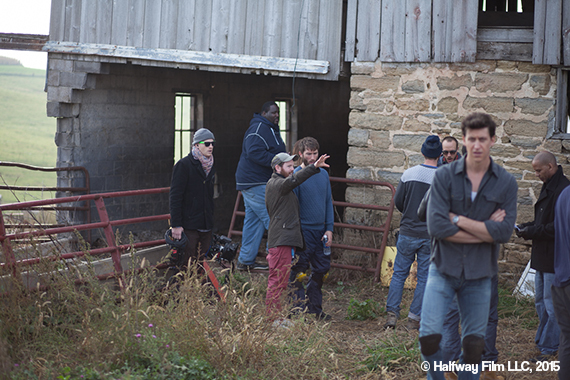 Q: With software and modern technology, people making movies on their iPhones, for example, the world of film is opening up to almost everyone. Do you think that's a good thing or bad thing, and why?

A: A good thing. Ever since Thomas Edison was credited with giving birth to the motion picture industry in the late nineteenth century, it has constantly been faced with challenges that generally fit in to one of three categories: creative, economical, or technological. From the invention of "talkies" in the 1920s with The Jazz Singer to the birth of using colour in films, invention of television, the multinational conglomerate takeover of film studios that still exists today with companies like Time Warner and News Corp ruling the roost over Warner Bros and Fox respectively, the birth and subsequent demise of DVDs -- the list goes on. The important thing to know is that the film industry isn't going anywhere, it is simply evolving in a manner that fits in line with an historical precedent.

I believe that in general it is a good thing that the process of content creation has become so easily accessible. I guarantee we will find an Academy Award-winning writer or director that started out making a short film that someone shot on their GoPro and that got 100,000,000 hits on YouTube (that number isn't exaggerated!). The downside to this current evolution is that we're yet to find a truly effective filter for finding the diamonds within the rough. There are a lot of cat videos that garner massive viewership, but that's not necessarily something that translates in to a great proof-of-concept idea for a feature film. 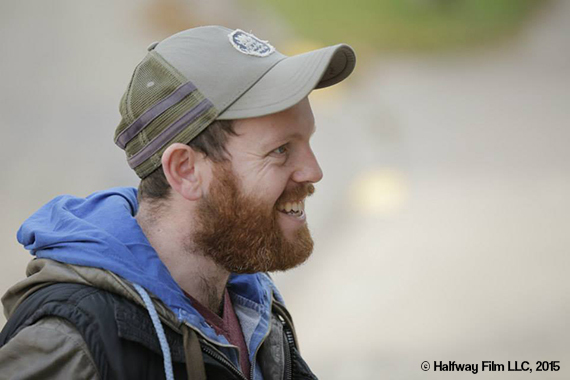