Over the next year we can expect to hear a lot from Republican presidential candidates about school choice- the word of choice to marshal political support to expand the number charter schools and vouchers for private schools. Democrats, except maybe the governor of New York, have traditionally opposed public funding for vouchers. However, many have supported the idea of choice by sending scarce tax dollars to charter schools. We have yet to hear clear statements from the Democratic candidates about where they stand.

As policy framing rhetoric, the word choice is meant evoke the imagery of democracy and equity. Words are powerful, especially in framing and influencing political debates. Words can conjure positive or negative emotional responses. However, sometimes words clarify and sometimes they obscure underlying values. So it is with choice.

In our culture the "the right to choose" suggests an almost inalienable individual right, making for powerfully resonant political rhetoric. However, behind the easy-to-swallow positive connotation of choice, there is underlying message in its use in the context of education. If stated explicitly, the message might cause a little indigestion: Be out for yourself and don't worry so much about your neighbors or community.

I do not say this to castigate parents who choose to send their children to charter schools or the teachers who work in them. However, what is moral or sensible for an individual does not make for sound or just education policy for a society. The moral burden falls not on parents, but on those who knowingly advance the wellbeing of the at the expense of the many.


It is time to reframe the policy dialog from choosing just for me to choosing to ensure better schools for us.

There is reason for hope. While choice is a deeply held American value, so is community responsibility. In fact, reference to individualism and community responsibility in politics has ebbed and flowed in recent American history. The New Deal of the 1930s and the Great Society of the 1960's- catalyzed by the labor and civil rights movements- represented high points for collective solutions, such as Social Security or Medicare, to complex problems. Alternatively, the election of Ronald Reagan initiated a sustained period of individualism. In periods of relative or growing equity and shared prosperity individualism may foster personal interests and creativity. However, in periods of scarcity a selfish brand of individualism diminishes equity by diverting attention from more systemic solutions that can only be achieved by collective action. Such is the case with charter schools. Only some are superior, and there is no evidence that a market-based, all-charter system will lead to overall improvement. On the contrary, charter school expansion is more likely to lead to market volatility and disruption in children's lives.

With individualism in ascendancy, few current politicians challenge structural inequality or run for office on an explicit program of equity. Sadly, faith in the prospect of voting as a route to greater equity is at a low point while cynicism about the viability political process grows. As a result, the self-interested perspective of those with relatively more privilege leads to holding fast what they have. In the context of scarce federal and state education resources, that means protecting their community's property tax resource advantage. It means maintaining various in-school segregative tracking mechanisms that privilege some children over others. Similarly, from the perspective of the disempowered and disadvantaged in urban areas, charter schools and vouchers may represent an individual choice in the apparent absence of viable community alternatives.

Supporters of equity and democracy must depend upon and develop agency and hope for community solutions because when there is only despair, the only rational course of action is individual survival. Ideological supporters of privatization understand this and actively undermine democratic participation and the promise of collective solutions. That is why since the 1980's they have followed an explicit starve-the-beast strategy to defund public institutions in order to undermine quality, public trust, and confidence. That is why they favor private charter boards over elected school boards.

I have come to believe that the struggle for equity must include a tandem strategy of opposition and advocacy.

Friends of equity need to oppose funding charter school, not because choice is inherently a bad idea but because the spread of charter schools is morally corrosive and drains money from other local schools. Since funds are always limited, the opportunities for the few come with the sacrifice of others. "They are stealing your child's future," might be an appropriate opposition slogan.

Developments outside of education, such as adoption of a $15 per hour minimum wage in several cities, may represent the beginning of a climb out of the valley of individualism. In education, the fledgling opt-out movement in response to the misuse of testing may represent a resurgence of hope in the power of agency through collective action.

Progress requires an opt-in campaign for local public schools based on community rather than individualist values. Advocacy should highlight the fundamental characteristics of effective public schools both in the U.S. and abroad and contrast these with prevalent market-based solutions. 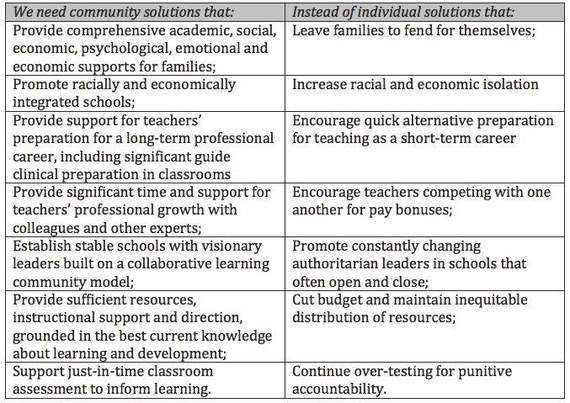 These are the factors that make for the oft-mentioned great schools and teachers in which children flourish. Many already exist. The public needs to hear their stories. Friends of equity and democracy need to relentlessly offer these factors as a viable alternative for better schools. Change will only happen when a movement demands these factors from the people we elect- from school boards to presidents. What we need is better choices in who we elect to guide education policy. Candidates need to hear from the public: There are better choices than school choice to improve education.

Arthur H. Camins is the director of the Center for Innovation in Engineering and Science Education at the Stevens Institute of Technology in Hoboken, N.J. He has taught and been an administrator in New York City, Massachusetts and Louisville, Kentucky. The ideas expressed in this article are his alone and do not represent Stevens Institute.