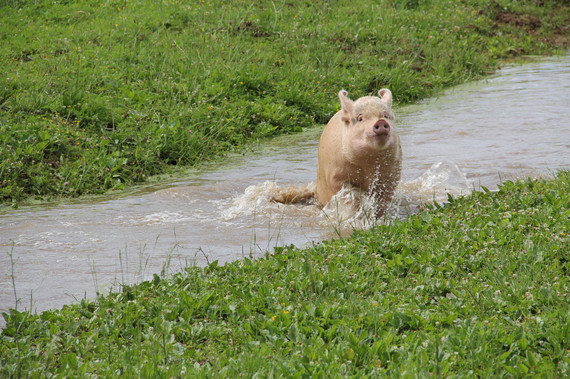 Are we humans the only species entitled to pursue happiness?

Heady and triumphant. There aren't too many times when these words fit our circumstances. But last week, they certainly did.

First, there was the astonishing grace of the nine families of the Charleston murder victims who forgave their killer, asking God to show mercy on him. "Hate won't win," they said to Dylann Roof. Next, the unceremonious removal of the Confederate flag in communities and states around the South. Last Thursday, the Supreme Court upheld the Affordable Care Act, and on Friday, it voted in favor of marriage equality, and streets pulsed with energy and elation at Gay Pride parades throughout the land.

As different as they are, these events all sprang from the best of what it means to be human. Fairness and inclusion won in the Supreme Court's upholding of key provisions of the Affordable Care Act. "Love wins," is the slogan that embodied the victory for marriage equality. Love won not only in Charleston, South Carolina, but around the country as the grace of the nine families fostered introspection, dialogue, and social change. "The arc of the moral universe is long," Dr. Martin Luther King spoke, "but it bends towards justice." Yes, indeed. Justice. Compassion. Our inherent sense of what is right. The Golden Rule. These fundamental truths won last week, and we are a better nation for those victories.

But what is often is forgotten is that while the arc is long, the moral universe is large. Our work is never done: yesterday's oppressed are tomorrow's defended. And who, America, are more oppressed than the animals?

"In the ways that truly matter, we are all the same" is the statement Catskill Animal Sanctuary has uttered since our inception in 2001. It's a belief that guides all that we do. It's printed on our t-shirts, and it's the thematic thread in my books and on our tours. And it means exactly what it says: that regardless of species, we all love. We all form friendships. We all mourn when loved ones die. We are all uniquely quirky and individual: ten pigs or ten chickens are as individual as ten dogs or ten humans. Among our chickens, for instance, Cheeky is a communicative social butterfly, Rascal is possessive and aggressive, and Peabody is possibly the brightest bird I've ever met. The emotions we experience--love, excitement, anticipation, empathy, frustration, impatience--ALL OF THEM--are experienced by chickens and pigs, sheep and cows. And, of course, pain and suffering feel the same, whether we are dog or cat, pig or person.

But that's what we do to the animals who become our food. We steal newborns from their mothers, chop off body parts without anesthesia, cage animals in fetid warehouses, engineer them to grow so quickly that many die as babies from violent heart attacks. The egg industry grinds up hundreds of millions of newborn roosters -- tiny, peeping balls of fluff that you could hold in your hand -- because roosters don't lay eggs. Baby pigs too sick or small to be profitable have their skulls smashed against the wall. Our practices are beyond barbarism.

Is this the America we want? 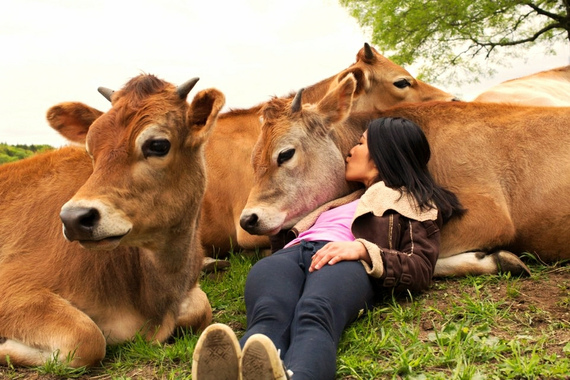 Let me ask a simple question. If animals are a) unique individuals, b) who want their lives as much as I want mine, and c) feel terror, confinement, pain, and suffering just as I would, how is oppressing them any different than oppressing humans based on superficial differences like skin color, gender, social class or sexual orientation? Isn't the urgent next step in our evolution to honor the billions just like us in the ways that matter?

When it comes to our fellow beings, it seems to me that we can do one of two things. We can keep our heads in the sand as they've been throughout time, ignoring animals who scream out for mercy in factory buildings and slaughterhouses, and ignoring the reality that our consumption of animal products has brought our beautiful planet to its knees. With this choice, we ignore The Golden Rule. Selfishness wins.

Or, as we did last week, we can draw on the noblest qualities we possess: selflessness, empathy, kindness, compassion. We can "do unto them" as we would have done unto us. We can choose not to eat animals, which is the root cause of the mind-numbing deprivation and terror, pain and suffering they endure.

On Independence Day, I invite you to consider whether all beings--not just humans, dogs, and cats--are entitled to life, liberty, and the pursuit of happiness, and to join the legions who have chosen to align their lifestyles with their beliefs. All you have to do is go vegan.

And now onward. For all of us.