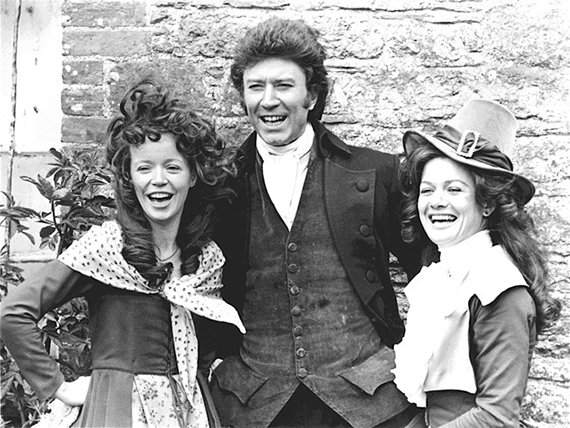 Masterpiece Theatre has done it again -- literally. Since early March, millions of people around the world have been captivated by the story of Ross Poldark in Poldark, Masterpiece's adaptation of Winston Graham's series, set in Cornwall in the late 18th century. Smoldering Ross Poldark, born a rebel in his elite world, has returned from the American Revolutionary war to find his fiancée, thinking him dead, has become engaged to his cousin. The country and its people are facing severe hardships; Poldark's father has died and left his estate and mine in ruins. The story is captivating, the acting mesmerizing. And the breathtaking landscape of Cornwall is a character unto itself.

But this new telling of the Poldark saga stands on the shoulders of the original series, which forty years ago also enchanted the world, led by the "original Poldark," Robin Ellis.

When my local PBS station, KCTS 9, announced the imminent airing of the new series, I borrowed the DVDs of the original series from a Poldark-loving friend. I hadn't seen the show when it first aired, but instantly I could see why the world had been so enthralled by Robin and Masterpiece's original version of Poldark. After watching a few episodes of the new series, in which Robin has a cameo as Reverend Halse in episodes 3 and 6, I knew I wanted to chat with him. Robin graciously agreed to answer my many questions, and his wife, Meredith Wheeler, sent me a plethora of gorgeous photos. My tremendous thanks and best wishes to both Robin and Meredith! 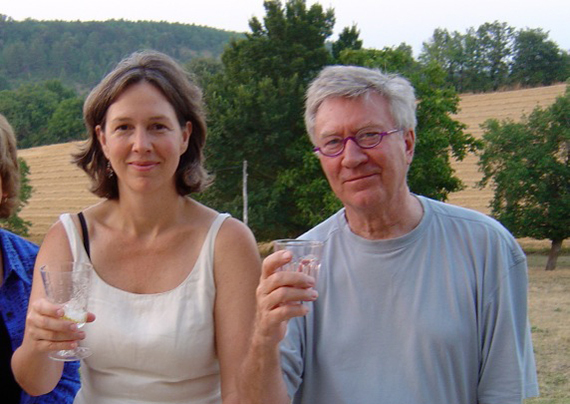 Q: Forty years ago, you were the swoon-worthy Ross Poldark in Masterpiece Theatre's original series, Poldark, based on the novels by Winston Graham. I've read that it was so big, you had some "Beatle-esque" moments. What was it like, going from being a relatively "regular" guy to being an instant star? Was it challenging?

A: The world was a bit different forty years ago. There wasn't as intense a celebrity culture as there is today. It was like the difference between enjoying a warm summer's day and enduring a heatwave. I enjoyed the attention (I'm an actor!) which only occasionally got too hot. 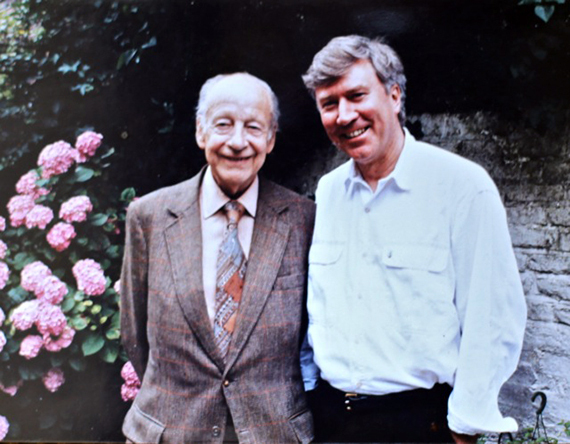 Q: The original Poldark had an immense following. You've said that part of the appeal in, for example, Spain was that the country had two TV channels at the time it was aired, one of which was a government channel. Obviously you were joking (in part). But even today, with hundreds of channels available to people on TV and online, the new series is capturing audiences' attention worldwide. What do you think it is about the Poldark stories that has such enduring appeal?

A: People love to be told good stories (I do). These stories endure because they feel authentic. People can identify with them regardless of the fact they take place in a different era. And Winston Graham's characters don't come over as manipulated by the puppet master. You feel they have a say in how they run their lives -- for better or worse. It helps that the well researched setting happens to be extraordinarily beautiful and cinematically ravishing. 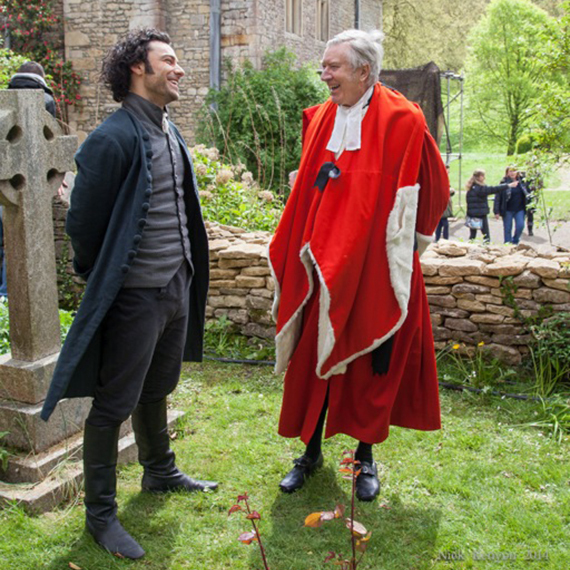 Q: I understand that neither Debbie Horsfield (the writer who adapted Graham's books for the new series) nor Aidan Turner (the "new Ross Poldark") watched the original series before creating their own interpretations of Graham's stories. In some cases the end results are quite different, both from Horsfield's/Turner's new interpretations, as well as from the fact that four decades have passed and times have changed. What are your thoughts on the new series?

A: It's big, it's beautiful and it's terrifically acted. 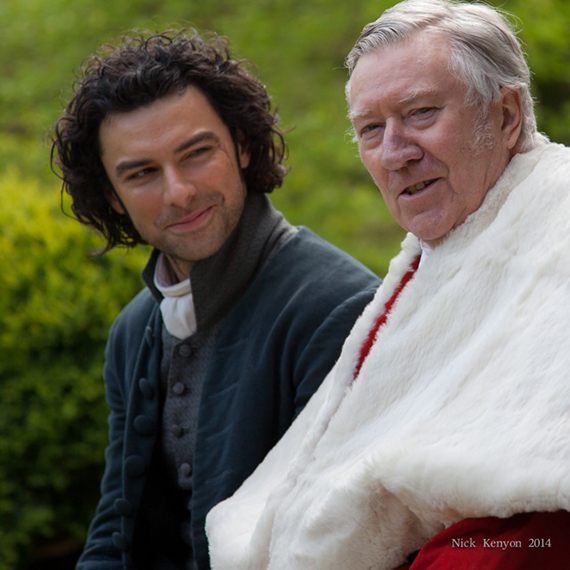 Q: Along those lines, in my opinion the new Ross Poldark has in some ways a different personality/characterization than the original Ross Poldark. I don't want to lead the witness here by telling you the differences I see -- what differences do you see?

A: Ross Poldark is a wonderful character to play. He was born an elite but he hates elites and gets into fights with his own kind, sometimes with dire results. He's bold but sometimes his choices of action get him into trouble and threaten his family and loved ones. In other words, he's flawed. Like all great characters, there is never a definitive way to play them -- no two Hamlets are alike -- they reflect the people who play them. Aidan Turner is giving a tremendous and committed performance as Ross. I tried to do the same forty years ago. Ross is that kind of character. You go for it -- it allows you to! 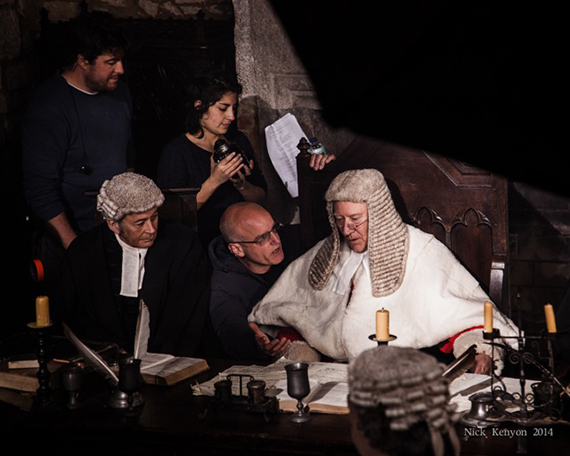 Q: How was it, revisiting Poldark for the new series, this time as Reverend Halse? Did you come at it with a different perspective on acting and life? 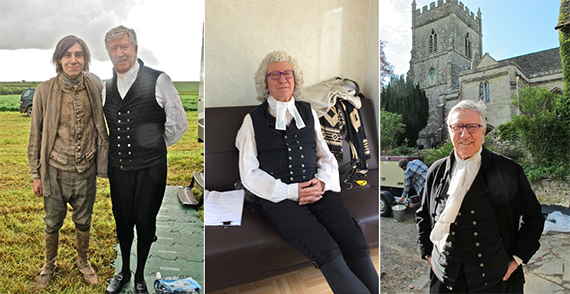 Q: It's been nearly a decade since your last role (as Tom Lyell on Wallander). Did acting in the new series give you a craving to do more acting again?

A: I wouldn't describe it as a craving but it whetted my appetite! 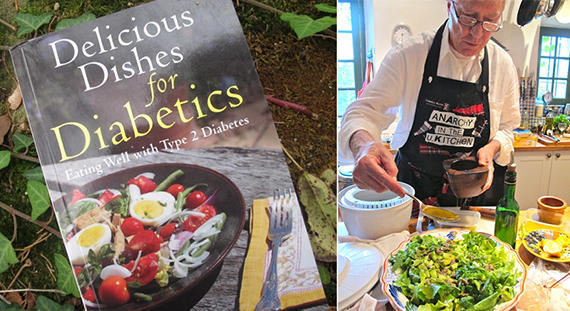 Q: Speaking of whetted appetites, I was so delighted to learn that these days, your work revolves around the culinary arts! I understand you've loved cooking since you were a child, but a medical diagnosis about fifteen years ago gave new life to your passion for the art form. Tell us more about that?

A: Sixteen years ago I was diagnosed with Type 2 Diabetes. I have collected recipes for years -- I learned that from my mother. I started writing up the recipes I cooked every day. Like characters in plays no two versions of a recipe are the same. I found a voice in the writing of them and enjoyed it. People had said to me, "You must write cookbook." "But there are too many cookbooks," I thought, "I'm an actor anyway, not a cook." After I was diagnosed, it felt different. Perhaps a cookbook of recipes describing the way we eat, suggested Meredith, might be a little different and useful to people. Now it made more sense and we presented the idea to a publisher who agreed to run with it. 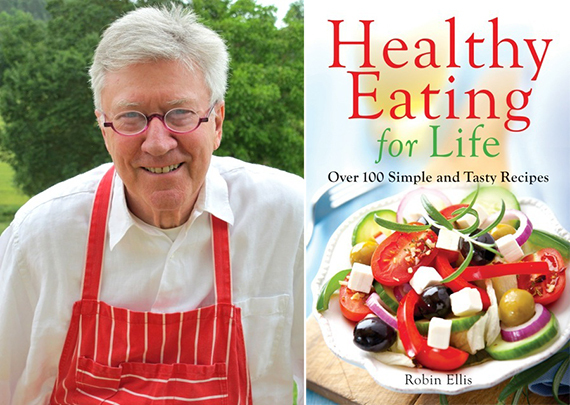 Q: What is it about cooking that you love?

A: The dailyness of it. I cook twice a day for us and it keeps me on my toes, so to speak.

Q: As you noted above, you've built on that love of cooking by writing some cookbooks! You have two books out, and a third in the works, is that right? Tell me a bit about each? How did you decide on the recipes to include? Where can people buy them?

A: Meredith eats what I cook each day, though she's not diabetic. Delicious Dishes for Diabetics, the first, describes the way we eat chez nous every day. It attempts to demonstrate that a diagnosis of diabetes doesn't mean the end of enjoying your food. The recipes in the book can be enjoyed by everyone -- it is not exclusively for diabetics. Healthy Eating for Life is an extension of the first. Mediterranean Cooking for Diabetics is a combination of the two plus new stuff and photos in a bigger paperback format. 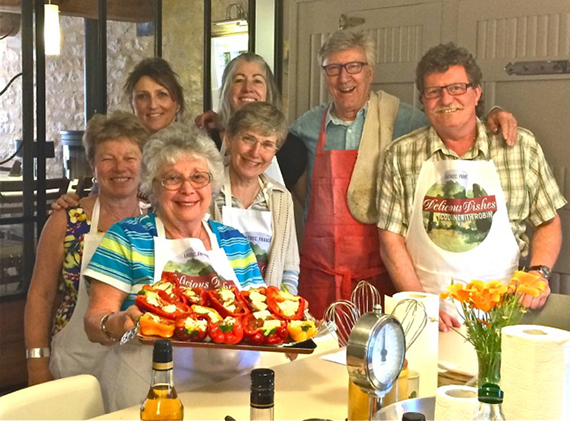 Q: Not one to let any grass grow under your feet, you lead cooking workshops too! Who are the classes for (is it only for diabetics?), where do they take place, how long do they last, what do people learn? What made you want to lead these workshops?

A: They are open to all. They take place in a beautiful B&B in our village. There is a demo kitchen in an annex. They last four days and we all cook together and then eat what we cook. It's a hands-on affair. No lecturing. I met the owner one day at the market and she told me about the new kitchen, and I heard myself saying, "Well one day maybe I could run a workshop there...." Voila! That'll teach me!

Q: Don't you think Poldark would have been the kind of man who would have liked to cook? He can do pretty much everything else!

A: He'd have to choose time when Prudie was in town -- she'd have been shocked to find him at the stove. Did men cook in those days? Very doubtful but if you think of him as I did, as a man out of his time, then anything is possible. 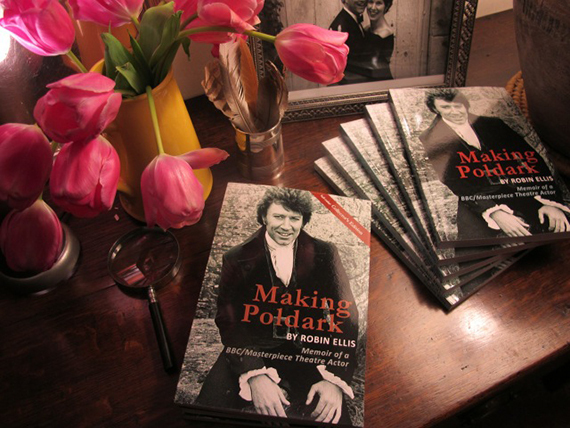 Q: Speaking again of Poldark and of books, you have a memoir out, as well, Making Poldark, with a new expanded version out this year. Am I correct that you first wrote it in 1978, updated it once in 2012 and then it again this year? In the process of going back to update the original text, did you feel you had new perspectives on your time as Poldark and the pivotal role it played in your life? What did you see or understand now, that you might not have seen forty years ago?

A: It has been updated and added to four times I think. It now has a chapter explaining how I became involved in the new go-around of Poldark. I have always felt indebted to Poldark and recognised the large part it has played in my life professionally and personally. I call them "Poldark Perks" and there are many. Appearing in the new version and the revival of interest in me and the first Poldark is yet another "Poldark Perk." It goes on! 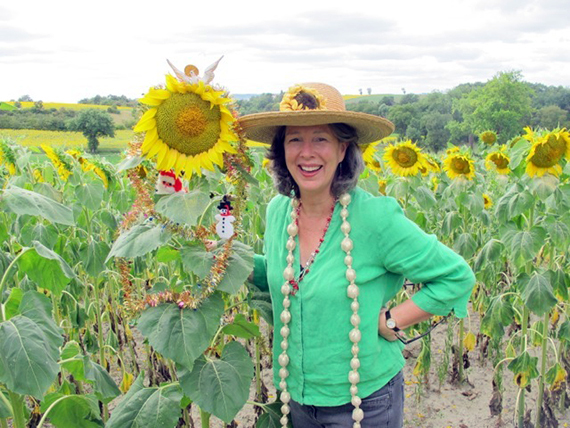 Q: What's next? What are you looking forward to?

A: One day at a time -- I am looking forward to tomorrow, while inhabiting today.

Q: Finally, some questions I like to ask people, starting with: What is success?

A: I don't find questions like these easy! Success might be the feeling I had about supper tonight. I made a curry sauce for left-over guinea fowl. In fact I didn't like the first sauce, so I tried a tomato based one. I was still doubtful about it. In the end I liked it and so did Meredith -- success?! One day at a time. 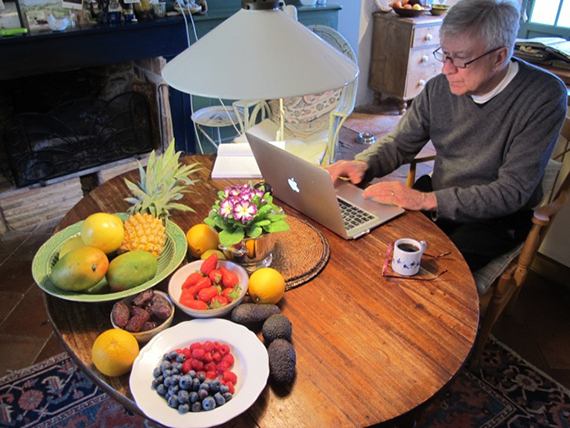 Q: What is happiness?

Q: What are the elements of a life well-lived?

My thanks again to Robin and Meredith for their time! It was a delight chatting with you! I wish you both continued success, happiness, and lives well-lived.