For the past few days I have been tuning into a live stream starring a rat in glass tank with a pile of $20 bills and green and gold spinning wheel that is too small for him. The rat knocks over the wheel, messes with the money in his ratty way as a backdrop changes randomly. This is "Hero" artist Fawn Rogers' latest conceptual project. The piece seems clear and basic: We are trapped like rats -- running to nowhere, consuming money, creating a mess. But Rogers, whose "Court" paintings of art collectors as playing cards caused a stir at Frieze Art Week in May this year, layers series of deeper meanings into this seemingly simple installation.

For "Hero" Rogers used $20 bills because they feature the image of Andrew Jackson. Jackson, the seventh president of the United States who owned more than 300 slaves over his lifetime, was responsible for the Indian Removal Act, which moved the Chickasaw, Choctaw, Muscogee-Creek, Seminole and Cherokee Nations from their lands to west of the Mississippi; the Cherokee forced march to the West is known as the Trail of Tears. Jackson's passage of the Indian Removal Act created forced reservations and gave Southern states the land that Native Americans had lived on tribally for generations. This expulsion, fueled by Manifest Destiny, led to the genocide and cultural destruction of Native communities. 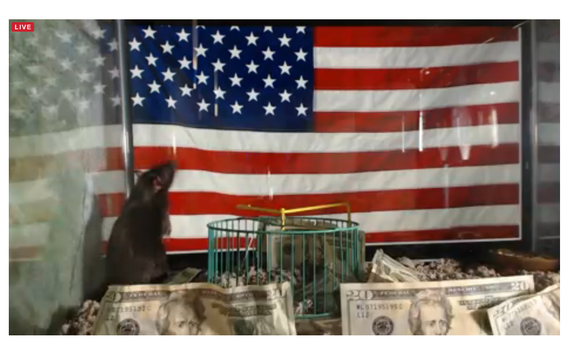 Rogers, who is part Cherokee -- her great-great grandmother as a child walked the Trail of Tears to relocation -- conceived "Hero" as commentary on Jackson. She remarked that feelings against Jackson run so high in Native American communities that some reservations refuse to accept $20 bills. And while there are arguments that many of founders of our country kept slaves and fought Indians, we do not see their faces on 8.1 billion pieces of paper currency, the number of $20s in circulation.

In "Hero," bills with Jackson's image are destroyed by a creature that in non-Western symbolism is revered for its industry, intelligence and cleverness. The rat in "Hero" also brings to mind James Clavell's anti-hero "King Rat" who rises above class and educational barriers in Japanese prisoner of war camp by rewarding those around him based on their abilities and results rather than their positions and rank. Meanwhile the backgrounds change randomly, creating a different environment for meditating on the rat and the currency that gradually has become torn, gnawed and tattered.

Digital manipulations create endless reflections, narrowing the rat, his wheel and the money into infinity; an infinity symbol appears, furthering that imagery, while the effects of Jackson's policies are seen in a bleak photograph of desolate, contemporary reservation houses against a desert landscape. Jackson's history as a slave owner comes up starkly with the names of the slaves he owned on his Hermitage plantation. Rogers's family history also plays across the background: her grandmother's hand print on deerskin, a photograph of her great-grandmother's hair pins. An American flag and 2015 bring us back to present time as the rat stands up, sniffs, nibbles the currency, sleeps, and tries to manipulate his useless wheel.

Jackson's policies are still felt today. More than one in four Native Americans live in poverty, according to 2014 data, and Native unemployment rates are charted at double the national average. According to a Center on Juvenile and Criminal Justice analysis of Centers for Disease Control data, cited by Al Jazeera, "Between 1999 and 2011 Native Americans were killed by police at a higher rate than any other racial group in the country." Native Americans, who make up .8 percent of the United States population, are the victims in 1.9 percent of police killings and in three of the top five top age-groups killed by law enforcement, according to Mother Jones.,

Watching the rat is relaxing; he's playful at times, resting at others, his nose twitching, eyes bright. A creature which no one wants to find running around loose in their house is controlled and contained as Jackson and his political descendents sought to control and contain people of color; the rat meanders, sleeps, and chews on the $20 bills, using them to build a nest, re-purposing the symbol of oppression for its own ends, but never able to escape its controlled environment.

Earlier this year there was a populist push to remove Jackson from the $20 bill. Instead the government decided to replace Alexander Hamilton on the $10 bill. With "Hero" Rogers' symbolic animal tries to do the job, while giving viewers plenty to think about as they tune in throughout the installation. Rogers is obviously passionate about her work; Federal law prohibits the destruction of U.S. currency to the point that it is "unfit to be reissued."

Rogers body of work over the past year -- the 50 story-high LED "I Love You and That Makes Me God" installation which grew out of her video project of the same name, the Visible Light photographs and Visible Light Project, and her most recent "Court" -- express daring, honesty and thoughtfulness, as well as her social concerns. In "Hero" she makes a connection with her family's history and current socio-political issues that is smart, strong and risky.

"Hero" streams live on fawnrogers.com through August 6, 24 hours a day; there are periods of lights-out so that the rat can sleep.

(The rat is provided with food and water, and will be re-homed as a pet at the conclusion of the installation.) 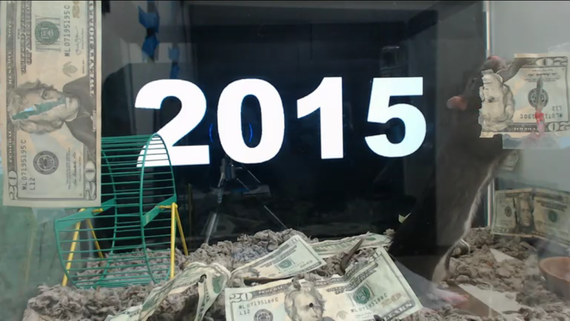 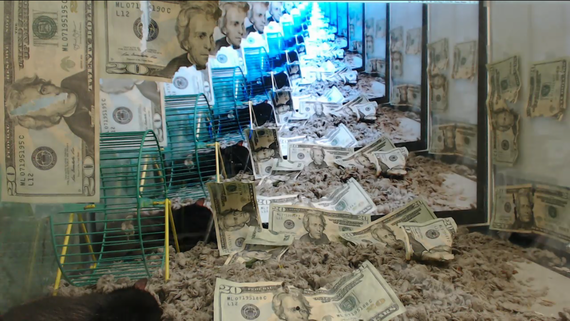