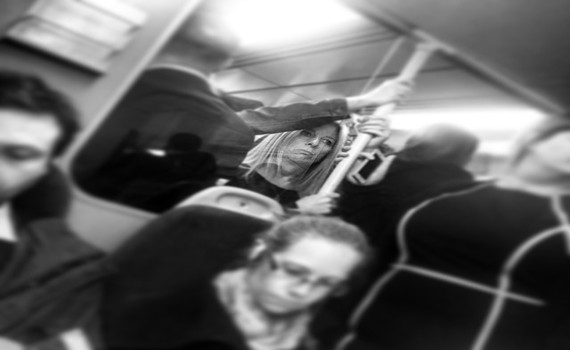 Woman on a crowded London train. Courtesy of Flickr.

It was around 11 pm on a Saturday, I was on a crowded BART train heading from Berkeley to San Francisco. The commute was taking longer than usual and I was tired, so I set up an alarm for twenty minutes, enough time to take a nap before my stop. A drunk guy that had gotten on the train a few minutes later decided to sit next to me. He started elbowing me, talking gibberish too close to my face; I got up and sat next to a man reading a book.

I fell asleep and woke up to the book reader yelling at the drunk guy, which ended with him getting off at the next stop. I was too tired to care, so I closed my eyes again. When my alarm went off, I asked the book reader what had happened, he told me how the drunk guy had been trying to touch me. I said, "Thank you, I shouldn't have been sleeping on the train anyways. I should know better." He said something like, "No, you should be able to sleep. I sleep on the train all the time and nobody bothers me, but that's because I'm a man. That guy felt it was OK to harass you in front of all of us because you are a woman."

I was no longer tired by the time my hero exited the train, I had been reminded that women are constantly subjected to unwanted attention and harassment. I was angry at the drunk guy and I was angry at myself for falling asleep on the train.

Once home, I found a Reddit thread about sleeping on BART. The original poster noted, "I'm not so afraid of something weird or criminal happening to me, but more afraid of missing my stop." Until I was harassed I hadn't been afraid of sleeping on public transit either.

Comment from discussion For those of you that sleep on the BART, how do you do it?.

That's not to say Bay Area mass transit riders aren't concerned about sexual harassment. The Bay Citizen reported that 60 percent of men believed unwanted sexual behavior was a problem compared to 83 percent of women. Men are clearly less worried about being harassed in public transit than women, but most men acknowledge it happens.

Like other crimes of a sexual nature, public transit harassment goes highly unreported. An estimated 370 million people ride Bay Area transit every year, but only 95 sex crimes were reported in all of 2011. Transit authorities across the country are encouraging people to report crimes, but there's a high chance sexual assailants would go unpunished, illustrated by the 87 percent of sexual assaults that go unreported on the New York City subway.

This lack of reporting creates a skewed picture of how safe public transit is. In a New York Times article, transportation authorities and sexual assault experts concluded that the area's problem does "not appear to be as big a problem as in other parts of the world." Some transit authorities even compared us to other countries that have female-only train cars to protect women in India, Mexico and Japan.

"I am glad we don't need them here," said Cheryl Brinkman, the current vice chairman of the San Francisco Municipal Transit Agency. "I can't imagine how bad it would have to be to set aside a car that is women-only."

These comparisons are ignoring the problem. Of course, we shouldn't have to separate the sexes, especially in San Francisco where unisex bathrooms are common. Instead, we should encourage people to stand up and report sexual harassment. At least the authorities would have a clearer picture of the problem and stop making empty claims about our safety.

And women are taking matters into their own hands. Organizations like stopstreetharrassment and iHollaback are helping women share their stories and empowering them to stand up.

I'm also pleased that some men are joining our fight. I am forever grateful to the man who stood up for me that night on the train. He physically protected me and he wasn't blind to the problem of sexual harassment. And more importantly, he didn't blame me, the victim, for being asleep.

The decision to sleep on a train is yours to make. The fact that I was asleep does not, in any way, excuse the drunk man's behavior. We need to respect people, especially in our shared spaces. We need people to keep speaking up. Not only for ourselves but for those around us as well -- we are not alone!