It is being reported that Walter is nowhere to be found. He seems to have gone missing. His cosmetic dental office is closed, and no one answers the door at his suburban Minneapolis McMansion. He has reportedly sent a note to his patients to go elsewhere. (Many intended to do that without the doctor's advice.) Will we soon see his smiling face on milk cartons? "Have you seen this man?" 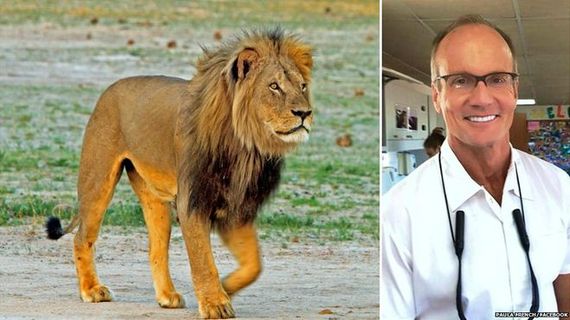 Come on, Walter, MAN UP and SHOW UP. You don't want to be thought of as a coward, do you? Think of your reputation. You are a skilled hunter and a world adventurer who leaves the comforts of home-sweet-home in Minnesota to travel to faraway foreign lands for the thrill of the kill. Oh, what fun!

What can we do to bait you out of your protected site? Would pulling the carcass of a dead animal behind a vehicle lure you out of your safety zone? (It allegedly worked to get Cecil.)

How could a brave big game hunter be so afraid to show up and address the media and his critics? Are you trembling at the thought of facing those children leaving toy animals at the doorstep of your dental office? Or are the only stuffed animals you crave the ones you do yourself? Are you hiding in plain sight in hunter's camouflage gear? Walter, Walter, come out wherever you are! Oh my God -- please don't tell us you've gone hunting!

He allegedly spent $50,000 to kill Cecil the Lion, was previously fined $3000 for poaching a bear, and paid more than $127,000 to settle a sexual harassment lawsuit. Now it seems everyone is singing, "Hey, big spender, how about spending a little time with me?" Even U.S. Fish and Wildlife Service Director Dan Ashe has tweeted: #CecilTheLion #CNN reporting Dr. Palmer seeking to cooperate. EZ to do. U or ur representative please contact #USFWS immediately.

Where, oh, where can Walter be?