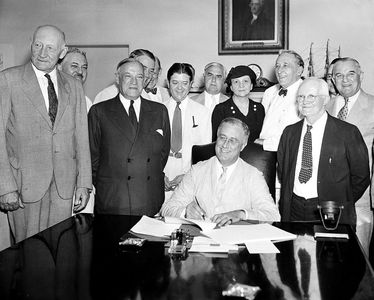 President Franklin D. Roosevelt signs the Social Security law on August 15, 1935. Senator Robert Wagner of New York (in the dark suit), the bill's chief sponsor, is to the FDR's left. Secretary of Labor Frances Perkins, a key architect of the law, is standing behind the president.

Alf Landon, the Kansas governor running as the Republican Party's 1936 presidential candidate, called it a "fraud on the working man." Silas Strawn, a former president of both the American Bar Association and the U.S. Chamber of Commerce, said it was part of President Franklin D. Roosevelt's attempt to "Sovietize the country." The American Medical Association denounced it as a "compulsory socialistic tax."

What was this threat to American prosperity, freedom and democracy they were all decrying? It was Social Security, which Roosevelt signed into law on August 14, 1935 -- 80 years ago today.

The opponents of Social Security were not right-wing extremists (the counterparts of today's Tea Party), but the business establishment and the Republican Party mainstream.

In the early Depression years, more than half of America's elderly lived in poverty. But most business leaders and conservatives considered the very idea that government had a moral responsibility to help senior citizens retire with dignity to be outrageously radical, a dangerous trampling of individual liberty. They predicted that the Social Security tax would bankrupt the country.

As New York's former governor, Roosevelt knew that business groups had opposed the most important pieces of social legislation on that state's books, including the factory inspection law (passed as a result of the 1911 Triangle Shirt Waist factory fire that killed 146 women), the law limiting women's work week to 54 hours, unemployment insurance, pensions for the elderly and public works projects to put people back to work.

Once elected president, FDR viewed Social Security as part of his broader New Deal effort to humanize capitalism. Born to privilege, he understood that many wealthy people considered him a traitor to his class. They were, he thought, greedy, unenlightened and on the wrong side of history.

FDR outmaneuvered Social Security's opponents, using his bully pulpit to explain why they were misguided.

"A few timid people, who fear progress, will try to give you new and strange names for what we are doing," he said in a June 1934 "fireside chat" on the radio. "Sometimes they will call it fascism, sometimes communism, sometimes regimentation, sometimes socialism. But in so doing, they are trying to make very complex and theoretical something that is really very simple and very practical.... I believe that what we are doing today is a necessary fulfillment of what Americans have always been doing -- a fulfillment of old and tested American ideals."

Most Americans agreed. Running for reelection the next year, FDR beat Landon in a 60.8 percent to 36.6 percent landslide.

Today, Social Security insures families against the loss of income caused by retirement, disability or death. It provides about $800 billion in benefits to 60 million people. It lifts more than 35 million older Americans out of poverty. About two-thirds of Social Security's beneficiaries are retirees. The rest are disabled workers, survivors or the spouses and children of retired or disabled workers. One-third of seniors relying on Social Security for virtually all of their income. They aren't living in luxury. The average annual benefit is about $15,000.

Americans view Social Security as a central component of the nation's social contract. It is probably the most popular federal government program. Not surprisingly, when President George W. Bush tried to privatize Social Security -- essentially asking Americans to put the security of their future in the stock market -- the people considered it a preposterous idea, especially after they had watched thousands of Enron investors lose their savings and saw the stock market lose 38 percent of its value between January 2000 and October 2002.

There are still a handful of Americans who bash Social Security. Two of the most influential lobby groups are Fix the Debt and the Business Roundtable. Fix the Debt, started in 2012 with funds from Wall Street tycoon Peter Peterson, is comprised of more than 135 CEOs of major corporations. The Business Roundtable is made up of about 200 CEOs of America's largest corporations. Under the guise of "strengthening" Social Security they want to weaken it. They are pushing the current candidates for president to follow their lead by calling for Social Security "reform," which is their code word for means- testing, reducing the cost-of-living adjustment, and raising the retirement age.

But Americans don't agree. A 2013 national poll found that 87 percent of Americans -- even 71 percent of Republicans -- believe that policymakers in Washington should preserve Social Security, even if it means increasing Social Security taxes on the wealthy. Under the current system, only the first $118,500 of a wage earner's income is subject to the payroll tax that funds Social Security.

If upper-income earners paid into Social Security at the same rate as the rest of us, we could expand benefits for the majority of Americans. A recent report by the Center for Economic and Policy Research found that only the top 1.5 percent (1 in 67) and 0.7 percent (1 in 140) of Americans would be affected if the Social Security tax were applied to earnings over $250,000 and $400,000, respectively.

America, one of the world's wealthiest nations, can afford to provide an economic cushion for the elderly and the disabled. By making some minor adjustments, Social Security will remain vital and solvent for this and future generations.

In retrospect, it is obvious that Social Security's Depression-era opponents engaged in fear-mongering, not economic reality. Their opposition was based on a free-market fundamentalist ideology that abhorred any attempt to use government to improve Americans' living conditions.

Just as the early battle over Social Security wasn't really about old-age insurance, current fights over public policy are really placeholders for broader concerns. They are about what kind of country we want to be and what values we consider most important. Today, business groups and right-wing zealots oppose tougher financial regulations, stronger workplace safety laws, policies to limit climate change, higher taxes on the rich and extension of unemployment insurance to the long-term jobless. The issues vary, but the mantra is the same: This policy will kill jobs, undermine the entrepreneurial spirit and destroy freedom.

The White House and progressive activists should aggressively challenge assertions about the disasters that will befall us if government protects consumers, workers, seniors, children, the disabled and the environment. Throughout our history, progress has been made when activists and politicians proposed bold ideas and then won a series of steppingstone reforms that redefined the social contract.

Peter Dreier is professor of politics and chair of the Urban & Environmental Policy Department at Occidental College. His most recent book is The 100 Greatest Americans of the 20th Century: A Social Justice Hall of Fame. Donald Cohen is the executive director of In The Public Interest, a non-profit resource center on government privatization and responsible contracting. They are co-directors of the Cry Wolf Project.