As a religion writer, I've got plenty of respect for Islam as well as for the many (friendly, smart, lovable, cool, inspiring) Muslims I've met on the religion beat over the years. So, trust me. This is not a rant against Islam or Muslims.

I got a close-up look at this when I entered the magnificent Hagia Sofia for the first time during a trip to Istanbul on a sunny October day a few years ago. Completed 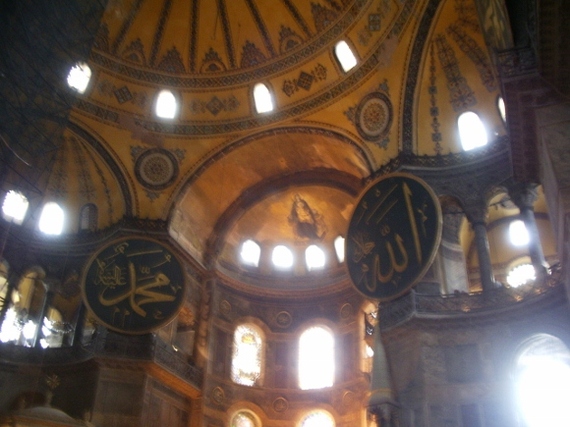 Christianity's Madonna and Child flanked by roundels with Arabic script bearing the names of Muhammad and Allah. Photo by Barbara Newhall

in 537 by order of the Emperor Justinian, this glorious Byzantine basilica was the focal point of Eastern Orthodox Christianity for nearly a millennium.

The Hagia Sophia's status as a Christian church came to an abrupt end, however, when the Ottoman Turks conquered Constantinople in 1453 and converted the basilica into a mosque soon after.

I am fully aware that Western Christians have done their share of imposing their culture, technology and religion on the peoples they have conquered or overwhelmed. I know, just for starters, all about how the Parthenon, a temple built to honor the Pagan goddess Athena, was taken over and turned into a church dedicated to the Virgin Mary.

Still, I see now that I've understood religious oppression only intellectually all these years. As a Christian living in a mostly Christian country, I've never really known how it feels to have one's faith and its most cherished symbols obliterated by a colonizing force.

Until I stepped inside the Hagia Sophia.

It was dark in there. The few remaining Christian mosaics - including those of Jesus, the Virgin Mary and Saint John Chrysostom - were nearly invisible.

Not at all invisible, however, were eight huge round black disks, each one nearly 25 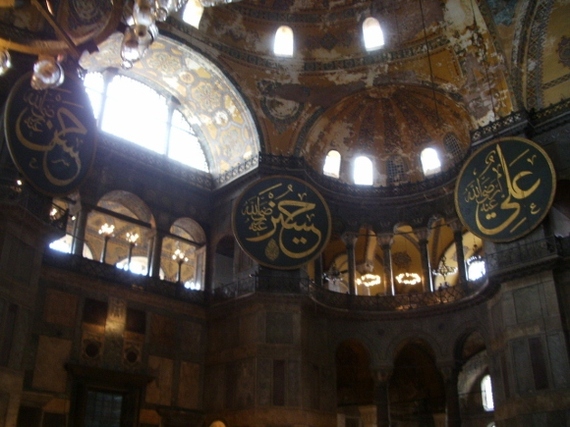 feet across and each one emblazoned with -- to me unintelligible -- Arabic calligraphy. Constructed of wood and leather, the disks were conspicuously placed, high on the columns supporting the basilica's massive dome.

The disks - also known as medallions or roundels -- felt like giant, flashy billboards for Islam. I've got God on my side and you don't, they seemed to argue. It didn't help that, when I climbed to the upstairs balconies and stood behind the disks, I could see their crude wooden backsides.

To my Muslim friends no doubt the calligraphy on those medallions would feel holy and beautiful. The inscriptions represent, after all, the names of Allah, Muhammad, Islam's first four caliphs, and Muhammad's two grandsons. (Peace be upon them!)

But as a Christian standing in what had once been a magnificent church, I could not feel the holiness of those huge disks. I felt bullied by them.

It's been hundreds of years since the Hagia Sofia was seized and turned into a mosque, but on that Ocotber day, it felt like the desecration had happened yesterday.

The Hagia Sophia is a museum now, and I hear there's a campaign afoot to restore the basilica as a Christian church.

Part of me would love to see those eight in-your-face disks go away. But another part of me knows better. Just as Jerusalem has become a holy spot for Christians, Muslims 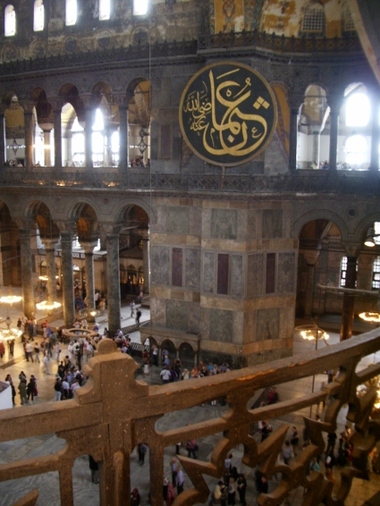 The Hagia Sophia is now a popular -- secular -museum. Photo by Barbara Newhall

and Baha'is as well as Jews. So has the Hagia Sophia come to belong to Muslims as well as Christians.

Back home now, sitting here in my writing room, I study my photos of the offending medallions. I hunt down more pictures of them online. I ponder their elegant, swooping lines. I open my mind - I try to - to the beauty of the calligraphy.

And after a while I see that, yes, indeed, they are beautiful. Like the Christian icons that preceded them, I find the boldface disks with the strange writing on them to be windows into the sacred. Soon I am scouring the Web for more photos. My eyes follow and are amazed by their complex, mysterious lines.

I wonder, the next time I enter the Hagia Sophia, will I feel oppressed by those medallions - or touched? I honestly don't know.

In France: "Hands Off My Church"

The Hagia Sophia transitioned from church to a mosque by force -- not acceptable under modern Western norms. But what if an empty church were to be turned into a mosque?

Dalil Boubakeur, head of Paris' Grand Mosque recently suggested that some of France's empty churches might be repurposed as mosques. French conservatives quickly assailed the proposal and rushed to sign a petition titled "Hands Off My Church," reports Tom Heneghan of Religion News Service.

Boubakeur softened his position, saying, "There is neither a desire nor a willingness to do this now." He added that it is solely up to the Catholic Church to determine the dispostion of its empty churches.
c 2015 Barbara Falconer Newhall. All Rights Reserved.

If this essay resonated with you, you might enjoy "The Center of the Universe? It's a Little Beach in Michigan, of Course." Also, "Beautiful Church, Dead Jesus."

A version of this story first appeared on BarbaraFalconerNewhall.com, where Barbara riffs on life and her rocky spiritual journey. Barbara's stint as a religion beat reporter inspired her newly released interfaith book "Wrestling with God: Stories of Doubt and Faith."