It was a typical Friday. I woke up to my alarm (which is just the diologue from a Hunger Games scene), looked in the mirror, recited the Gettysburg Address in its entirety (from memory), and was on my way to work. A typical Friday Morning, or so I thought.

Just as I was about to get in my limo for work, I noticed a notification alert on this site called Facebook. Little did I know at the time, but this notification would change my life as I know it.

If I'm being honest, at first I saw the message and dismissed it. "Oh it's probably just someone trying to get me to listen to their awful mixtape" I thought. "It's probably just my mom sending me some article that vaguely applies to my life" I told myself.

I was wrong. I was wrong in the best way possible.

I clicked on the "message" icon thus opening up the note. And to my surprise, who was it other than Nordstrom. That's right. Ever heard of 'em? Yeah. No big deal, just the upscale fashion retailer of America and the world talking to me. Actually, every history book you've read is mistaken. The Earth was created in 1901 when Nordstrom first began. Fire? Nordstrom invented it. Airplanes? The Nordstrom Brothers. The lightbulb? Thomas Nordstrom. I mean, you get it. Essentially every significant thing you've ever came into contact with was most likely tied to the Nordstrom family name.

But I digress (always wanted to say that)...

Here I was. ME. Jon Savitt. Self-proclaimed male model and THE Nordstrom (Facebook account). Was I nervous? Sure. Did I contemplate deleting my Facebook forever and moving to a small unpopulated island where I wouldn't have to look at a single piece of clothing again? Of course. Who wouldn't? But I took a deep breath.

You see, since an early age I always knew I was destined for big things. My parents told me "Good job!" on multiple occasions. My teachers would send me in the hallway for "timeouts" which I guess was their way of saying "Take some space, we don't want you getting dumber from the rest of these kids." I just didn't know that I was this important. Call it luck, but I didn't know that I would be the chosen one.

But I digress (literally it makes me sound so smart)...

I opened the message.

(Unfortunately, this is real) 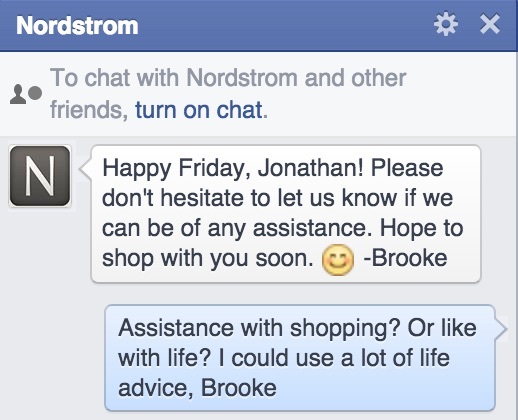 Admittedly, I just moved into a new luxurious house if luxurious means cheap and not expensive, and along with paying for groceries, gas, and all the other adult essentials, I wasn't thinking about making any purchases -- hence the reason why I asked Brooke if she could give me assistance with life in general.

She didn't respond. This made me sad. Wtf Brooke? I started losing the confidence in Nordstrom I once had. I ripped up all of their love letters (that's what we call receipts, it's an inside joke between me and "N"). It's like our relationship meant nothing. 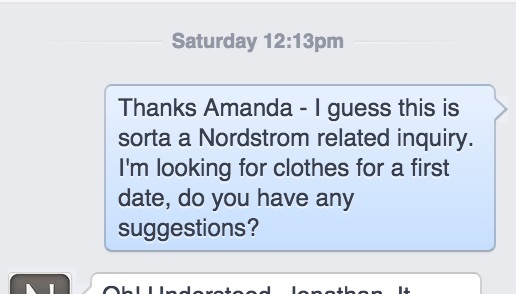 This is obvious. I have Nordstrom at my disposal, wanting, no, begging to help me. I'm not just going to NOT ask them for advice. But will she respond? What Does Amanda know about dating. Has she even been on a date before? How old is she? I knew an Amanda back in Kindergarten, she put crayons up her nose and fell off the slide during recess once. Was this her? Is this fate? 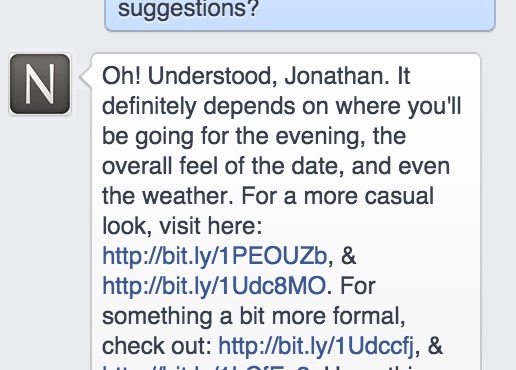 Amanda. Wise beyond her years. She even hit me up with links. #Links

Wait, Matt? Who the Frank Sinatra is Matt?! I started getting frusterated. What kind of establishment are they running. What are Brooke and Amanda doing? Would they start a conversation in real life and then just walk away mid question? Call me old fashioned but seems pretty rude to me. Also, don't forget, Matt. 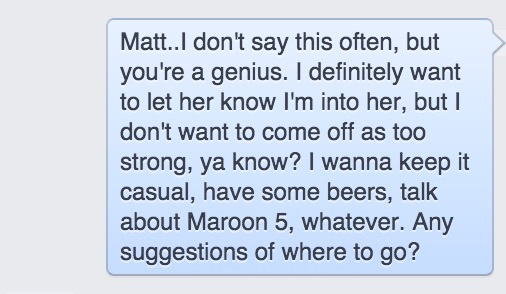 I kept those thoughts in my brain. I'm happy that Matt is here now and I am trying to live in the moment, I feel like that's what Nordstrom would want me to do. So, I take it a little further. I don't want the convo to end, I have dating expert and extrordinaire "Matt" here and I need to take advantage. If you're a musician and lead singer of Fall Out Boy, Patrick Stump is right in front of you, do you just sit in silence? I don't think so.

Wow! A local dive bar, dinner and a movie. Hmm I never thought of that. What dating school did Matt go to? I wonder how many classes he had to take in college to major in dating. At this point I felt like I owed the whole Nordstrom family BIG time. Who knows if I ever would have gone on another date again without their eye-opening advice.

This is pretty self-explanatory. 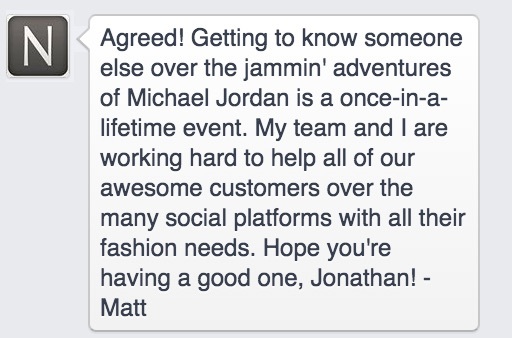 I fact-checked if "getting to know someone over the jammin adventures of Michael Jordan" is, indeed a once-in-a-lifetime event. He's not lying. 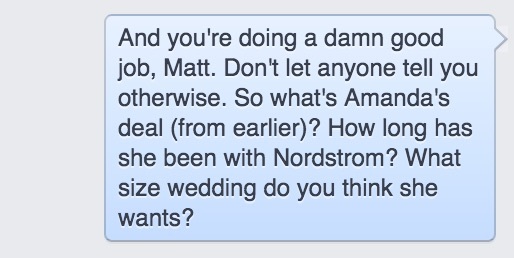 OK this just in. Matt HATED this. I mean, he reallllyyy didn't like that I said that.

Um, are Matt and Amanda together? Is that against @Nordstrom policy? CC: Human Resources.

Now I was at a classic crossroads situation: Do I pick the love of my life, or do I pick the long-trusted, loyal best friend? I had a lot of thinking to do.

Phew. That was a close one. I feel like a weight was lifted off of my (recently worked out) shoulders, however I still can't help but think what it could have been. A life with a Nordstrom employee. We would have it all: Shirts, pants, hell, even hats if we wanted them. Idc.

But I decided I couldn't live in the past...Not with Matt sitting anxiously by his computer waiting to help me with all my Nordstrom needs. 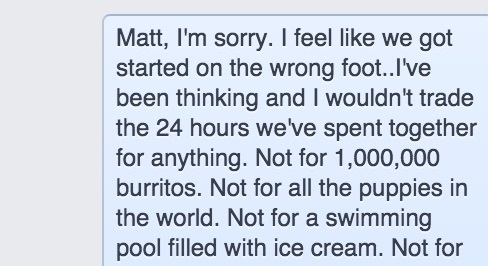 And so begins the apology. 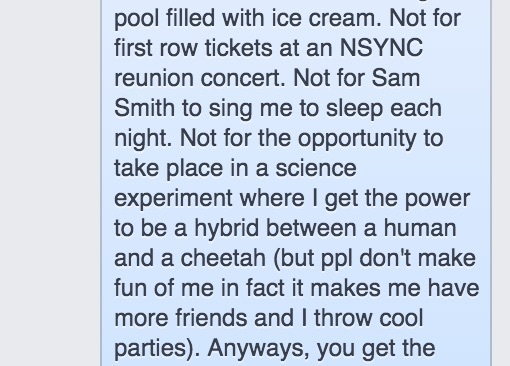 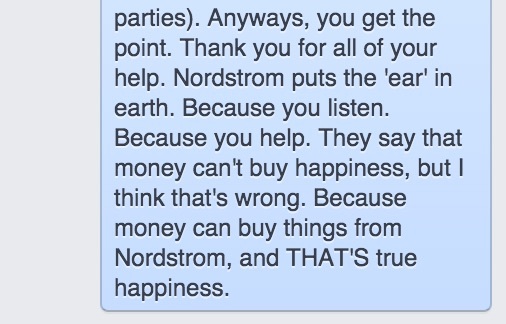 I said what the whole world was thinking.