Due to the recent airshow tragedies, I delayed posting this National Aviation Day video .

NOTE: You're welcome to skip the book and just watch the movie; however, if you suffer from insomnia, you should bookmark my blog, which will have you snoring in minutes.

Human locomotion is such a primal state of autonomy, that (particularly) in a world too far gone, wherein individuals feel increasingly trapped, their experience of the dream-like-state of self-propulsion is tied-in with a sometimes dangerous sense of strength, and self.

And so, for the workaday commuter, be she/he pedestrian, motorist, cyclist, or the occasional, cheap-flexin', hater-bike-messenger, this dream-state of self-propulsion is a relativistic state of grace to which each of these human species believes her or himself entitled -- to the point where any disruption of this last bastion of autonomy is taken as existential affront; hence, road-rage, scare-prank messengers, and all that passive-aggressive horn-honking that this New Yorker is subject to, and bases his pedestrian ( "pedestrian," is of course, used in both senses of the word) appraisals on.

Indeed, you could swap-out (small "e") "ego" for "object" in Newton's First, Second and Third Laws, merge 'em with Sartre's "Hell is Others" apothegm on the dreaded you know-who, and arrive at a theorum on the psycho-social-Darwinegonomics of any sidewalk, street or highway -- to wit: an ego in motion will remain self-comfortingly so, unless acted upon by another ego of equal or greater force.

By way of a (yet-to-be-comprehended) history lesson on human nature and existential license granted same by a new technology, you can read a dynamite article about the emergence of the automobile, and its impact on human consciousness, written a mere human lifespan ago: "Homicde On Wheels" is one of the many absolutely crucial bits of reading to be found in The Nation's online archive, which keeps alive -- and ready for use -- some of the best-first-drafts of our nation's beyond-fascinating history.

Keeping it archival, this epically human-scale shot of the Wright Brothers' first powered flight is a work of art unto itself. Indeed, the photo celebrates its subjects' strivings and ambitions so well, that we presume this moment to be merely the jumping-off point of a majestic take-off -- and this misperception of ours says a lot about how much we take the inevitability of techno-progress for granted -- when in reality, this flight was low enough to the ground for (by way of a surreal photobomb) the late Hervé Villechaize to note it, via his signature line -- at eye-level with the pilot. And deh plen's -- I mean the plane's -- first run was also short enough for the spunky Tattoo to beat it to the finish line. 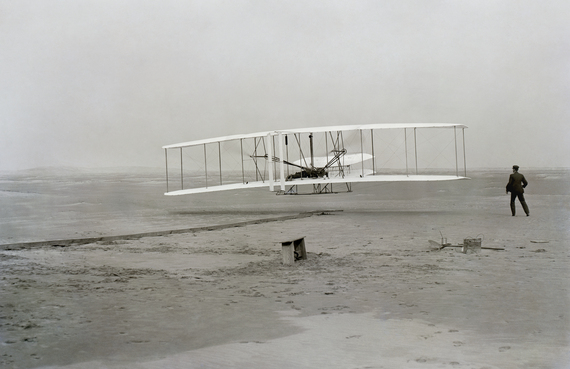 Note the stool, the shallow trench, and of course, Wilbur, (who lost the day's fateful coin toss) running alongside brother Orville, who, despite leaving terra firma for only a few seconds is an unimpeachable claimant (along with a few other of his pioneering, big-dreaming contemporaries) to having taken, well, one small (flying) leap for man and one gigantic step for all mankind.

And in a way, this snapshot of the dawn of a new technology -- and its subsequent ushering in of new ages affecting every facet of Humanity, throughout the subsequent, most senselessly bloody century (I'm not referring to plane crashes, I'm talking about planes dropping bombs) makes this documentary photo an ostensibly unlikely, yet actually quite genuine companion to some of the Modern Art 101 of the time and times to soon come: it's a kind of real-life DeChirico-scape, whilst also photobombing Dali's similarly stark selfies of the subconscious with a real-life re-contextualization slash re-normalization of Magritte's suited and hatted, inherently surreal everyman running alongside the plane, while another man clings to the machine they've created, as it takes off, with or without them.

In continued examination of the relationship between history and our documentation/perception of it, there's also our fascination with -- and eventual inurement to -- the horror, as manifested by this unintentionally oblique polemic, an opening salvo from what is, to my feeble mind, Warhol's most (only?) effective socially relevant series (though I will always love his "Vote McGovern" painting, just a few years later, after the crash of that fascinating decade). 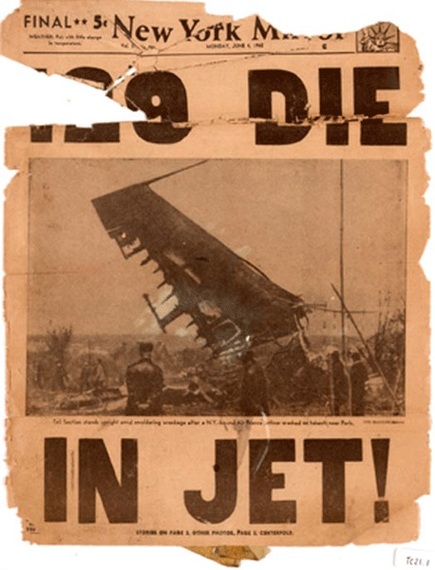 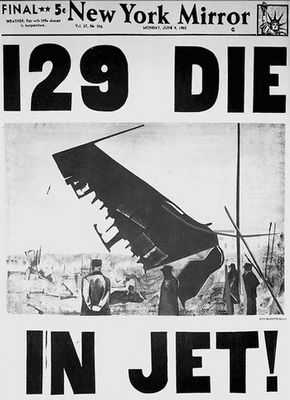 By way of a positive flip-side to our innate(?) nature, there is of course, humanity's mortal, profoundly earthbound love of flight, enjoyed during sleep and in this waking dream that we call life, through the vicarious deliverance which planes and rockets -- and the women and men who design and/or fly them -- bestow.

To observe National Aviation Day, I cut this video with the folks at Red Bull's Air Races, about which I will be reporting from Spielberg, Austria. I sent out a series of questions to the fourteen competing pilots representing eleven countries, and recorded their responses over an entire course-run.

Although air races are different from air shows, the (human) aviary community is relatively small and tight-knit, and so, due to the air show tragedies of the past few weeks, heavy hearts and even keener eyes will take to the sky this weekend, to celebrate once again, why we humans dare to attempt, well, mortal transcendence.

U.S. viewing of this weekend's air race will be geo-blocked; however, it will be broadcast in the U.S. on Fox Sports on 9/14. In the interim, you can catch up on the entire series HERE

Folks in other countries can watch it HERE

For an essential bit of serene and perspective-engendering National Aviation Day-related viewing, the always-worthwhile docclub.com is screening First-Person: Leaving The Earth, which is essentially a man named Denny Fitch's on-camera sharing of his experience as a pilot, riding in first-class on his day off, and finding himself helping out in the cockpit on the most fateful day of his life. You don't have to watch the cheap trailer, just check out this rich- in-every-way film; it's must-see TV....

... unless you're me, and this is the last film you saw before getting on a plane, and hearing the pilot announce that we would be delayed for two hours, due to a blinking light indicating the possibility of a failure in my ride to Austria's cooling system. Thankfully, I made it safely, even if my luggage didn't.

By way of a final note on perspective: after my luggage was lost, I found myself jovially pondering this quandary with fellow passengers; in noting -- and laughing about -- how we had only the clothing on our backs, we failed to, in the forgetfulness-of-being, acknowledge the millions of "displaced" around the world -- and the countless broken minds and "reduced" souls walking, falling, unseen, right through the very heart of my beloved hometown, NYC. Finding one's self in Austria, amidst the latest failing of humanity by, well, humanity, is cause for meditation. And action. Come on, Africa; come on, Europa, come on Middle East, America, China, et, al, do the right thing. As has been said time and again, yet sadly remains unheeded: If we can make it to the moon, we can take care of "our own" (read: ALL of us, here on Earth).