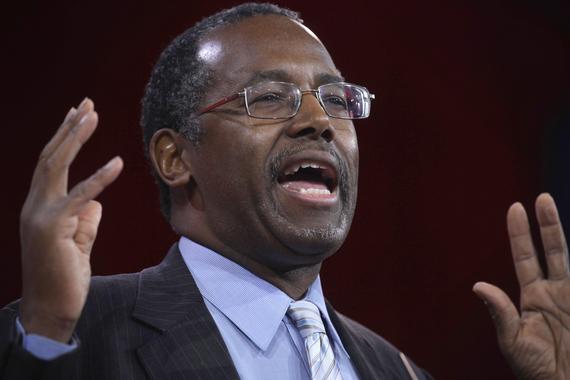 This piece originally appeared on AmericaBlog.com, a site dedicated to commentary on American politics.

This Sunday, presidential candidate Dr. Ben Carson said that he "would not advocate that we put a Muslim in charge of this nation. I absolutely would not agree with that." When asked whether he believed that Islam is compatible with the Constitution, he said, "No I don't, I do not."

There is no ambiguity in Carson's statements during his Meet the Press interview on September 20. He's clearly stated his belief that Islam is fundamentally incompatible with the Constitution.

There seems to be quite a trend of disingenuous religious-political analysis on the Constitution and religious texts, whereby only various denominations of Christianity, and not other religions like Islam, are protected by the Constitution. In past birther conspiracies, politicians have claimed that President Obama is a Muslim, as though the label is necessarily an insult. Rick Santorum himself has said that he does not believe in the separation of the church and the state.

One could easily point to the Constitution, which states quite clearly, that "Congress shall make no law respecting an establishment of religion or prohibiting the free exercise thereof". Thomas Jefferson's letter to the Danbury Baptist Association in 1802 elaborates further, explicitly referring to a "wall of separation between church and state". However, conservatives commonly respond with the idea that Islam is not a religion. Allen West called it a "theocratic political construct". Many more note images of violence in the Quran itself.

These conservatives' points may have some validity in that Islam does indeed set out laws for its believers. Its relationship with governments has been complex, making some aspects of the religion political depending on the nation involved. Furthermore, violence in the Quran has been noted by numerous scholars--the quotes do exist. But this analysis is specious at best, especially when faced with the hypocritical attempts to exempt Christianity from the same criticism.

Deuteronomy 17:12 (New International Version) explicitly calls for the death of anyone who shows contempt for priests. Even though Levictus 25 prohibits the poor treatment of Israelite slaves, it notes that the Israelites' slaves "are to come from the nations around (them); from them you may buy slaves." Even in the New Testament, Corinthians 14 explicitly supports misogyny, saying that it is disgraceful for women to speak in church while making no reference to the role of men in churches. These, along with hundreds of other rules in Christianity, have been enforced by governments to varying degrees throughout history. The religion has played a role in numerous wars, from the commonly pointed out Crusades to the Thirty Years' War and from the invasions of the Americas to 2003's Islamophobia-fueled invasion of Iraq.

No sane politician would call Christianity a "theocratic political construct" or a religion that is "incompatible" with the Constitution. All religions, including both Christianity and Islam, are tools that can be used for evil. But at the same time, the passions derived from godly faith have fueled hundreds of years of progress. Numerous Muslim contributors throughout history have included Mohammad Abdus Salam, whose work on electroweak unification that won him the Nobel Prize and Fethullah Gulen, whose message of tolerance has won millions of followers.

Many have raised concerns regarding the lack of coverage of Islamic scholars condemning terrorism. And yet even a cursory attempt at researching their statements brings up condemnations and attempts to start anti-terrorism campaigns from hundreds of scholars here, here, and here.

Attempts to simplify issues of terrorism to Christianity vs. Islam and civility vs. barbarianism paradigms are lazy and intellectually dishonest. They, as I have previously noted in my essays, demonstrate ignorance of the role of regional geopolitics, economic systems, and human rights in foreign policy. The nuanced perspective that conservative politicians have attempted to stifle remains common among the same Muslim civilians that they are attempting to attack. With thousands of face-to-face interviews, Gallup compiled data in 2007 indicating how Muslims criticize the West for its politics and not its religion, how Muslims continue to admire its technology and democracy, how they care for equal rights of women, how they want to keep religious leaders out of crafting legislation, and numerous other details on their views.

More importantly, Islamophobic statements demonizing the entry of Muslims into public service threatens the very foundation of our Constitution.

They run against our values as an inclusive nation where we are free to practice whatever faith grounds our hearts in society. These statements serve only to invalidate others based upon their conception of God, regardless of individual merits and faults. They dehumanize others, reducing them to a single data point, polarizing societies, and even tearing apart families that could have been bound not only by blood, but by a passion for good that has simply taken a different form.

Ben Carson's proximity to Donald Trump in the polls has made this a national issue, even though it shouldn't be one. How could we, as Americans, permit Dr. Carson to remain near the top of the polls while he makes such incendiary statements? Are we shallow enough to believe that the only good men are Christian men? Do we fail to see our brothers and sisters as living, breathing, loving, and thinking human beings, all capable of not only fiery animosity but also the warmest love that the heart can conjure? Our species has some of the most well-developed brains in the animal kingdom. It's time we used our brains' capabilities for both compassion and intellect.