One-Way Ticket: Jacob Lawrence's Migration Series and Other Works is an exhibition of the 60 tempera paintings of Lawrence's epic cycle about the mass movement of African Americans from the agrarian rural South to the industrial urban North in the early 20th C. The cycle, jointly owned by the Philips Collection in Washington, DC and the Museum of Modern Art and rarely exhibited in its entirety, is on display at the Museum of Modern Art in New York through September 7, 2015.

At age 23 Jacob Lawrence undertook this encompassing and ambitious series. The tradition of narrative history painting, the highest ideal of European painting since Giotto, but largely dormant since the early 1800's, had been revived in the contemporary mural cycles of Diego Rivera and José Clemente Orozco to depict the history and culture of Mexico and Latin America. Lawrence saw in the continuity and cumulative power of this narrative serial tradition an apt format for depicting the recent history of African Americans in the United States. Without access to the halls (or walls) of power--the grand monuments of history painting were murals in prominent church or state buildings--Lawrence worked on small panels in casein tempera, an inexpensive water-based medium. The intent of the series was historical and instructive, in contrast to almost all 20th C art movements, but the force and economy of Lawrence's expression gives the series narrative sweep, and each image a penetrating, affecting visual power.

Lawrence frequented the 135th Street Public Library in Harlem for historical research and the Metropolitan Museum for visual antecedents to his work. He envisioned the Migration Series almost as one single piece, working on all the images simultaneously, often applying the same color to multiple panels at one time to ensure the unity and consistency of the images. Each image is complete in itself, though recurrent shapes and colors interrelate and connect the images over the entire series. Each image is absorbing, sometimes intimate, yet the cumulative effect, built at the viewer's own pace, is monumental. Brief descriptive text accompanies each image, orienting that painting in historical context, sometimes with a terseness that heightens the emotional intensity and expressive breadth of the images. Panel 1 reads: "During the World War there was a great migration North by Southern Negroes" and with these few words he begins a depiction of one of the largest internal migrations in the history of the United States (the caption of the last panel is "And the migrants kept coming."). Lawrence's expression remains uninflected and unassuming, though it is impossible not to rebel at the horrors and injustices depicted, and from the perspective of our own time, it is deeply painful to realize the extent to which these indignities remain.

I can think of few painters in whose work narrative intent is so directly and effectively conveyed by pictorial space and composition. In Panel 58: "In the North the Negro had better educational facilities," the young students are striving towards attainment and independence in a rhythmic shift to the right. 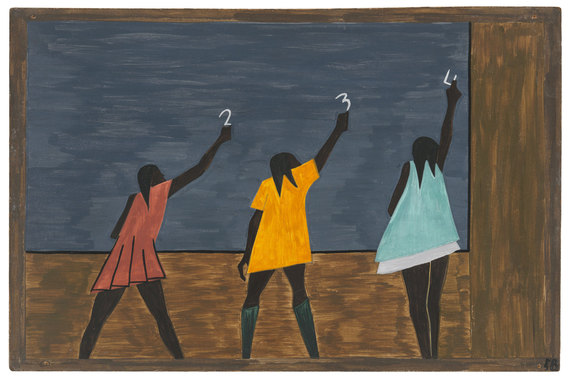 In Panel 48: "Housing for the Negroes was a very difficult problem" the pictorial space is congested and indeterminate; there is nowhere to go in the painting, as there was no room to live in overcrowded and appalling conditions. For Lawrence composition is meaning. Lawrence himself said: "When the subject is strong, simplicity is the only way to treat it." 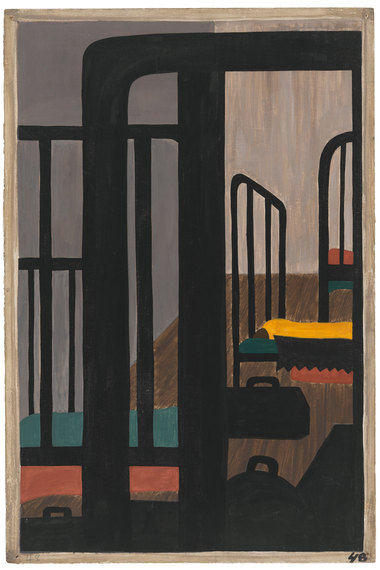 I had the unexpected good fortune to do my student teaching with Jacob Lawrence in the early 1980's at the University of Washington in Seattle. Lawrence loved to teach freshmen beginners, many of whom didn't know his name at the start of semester and hadn't learned it by the end. He knew his students' names, however, and if he really liked you he called you by your surname. He would remind undergraduates to paint what they knew well, and he would show them how little they knew their own world by wheeling a shopping cart containing worn and very ordinary objects down the long corridors of the School of Art to the studio and placing them directly in front of his students. These objects generally attracted no attention whatsoever until he pointed them out. We rarely see what's right there.

He was tacitly averse to working with graduate students, as I don't think he had much use for verbose and faddish theoretics, though he was willing at any point to visit your studio and share his thoughts. He would look at a piece and sometimes say, "I can see you struggled with this," and it took me a while to realize this wasn't a bad thing, that he was reminding you that, if you know in advance just how things will turn out, you lose the opportunity, however difficult, to do something you haven't done before.

In the Migration Series Jacob Lawrence did what hadn't been done before. A Black American, the child of migrants from the South, he drew upon the resources of his community, the history of his people, the traditional aims of European art, and a variety of 20th C modernist influences to create a vision of a vast, unacknowledged, and hugely influential struggle in American history. What he did, with means so modest and expression so spare and affecting, as a twenty-three year-old black man struggling in a country riven by economic depression and racism, remains stunning and enduring, and a reminder to us now of how much we have left to do.

For an interview with Jacob Lawrence about this series and his work in general, see -- http://www.moma.org/interactives/exhibitions/2015/onewayticket/jacob-lawrence/