What is it that makes a good life? And a good death?

BREAD is a multi-disciplinary arts collective dedicated to adapting and devising new work that challenges the typical and stretches the possible. Partnered with the famous historical site Green-Wood Cemetery and Amy Shackelford, founder of Modern Rebel, an alternative event planning company based out of Brooklyn, BREAD's multidisciplinary and immersive theater piece -The Great American Casket Company - dares to create a one of a kind experience for the audience. Karen Musey spoke with members of BREAD (director Katie Melby, writers Lyndsey Anderson, Ben Lewis and composer Andrew Lynch) about their experience creating The Great American Casket Company. 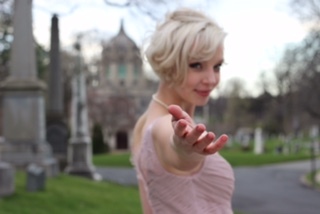 KM - What is The Great American Casket Company about?

Lewis - The piece evolves around a central character who's got a sort of modern malaise. He's unhappy and stuck in his job, and then he happens upon these larger than life eccentric characters who jolt him out of his funk. It's not a sombre piece at all. It's a very joyful, childlike romp into these heavy themes, which is the place our company aesthetic met Green-Wood Cemetery.

Melby - It's a huge piece. There are 16 people in the show; we have puppeteers, musicians, and a large acting ensemble.

KM - How did creating a story around a permanent set (ie the cemetery) affect story creation?

Melby - When we began this process, Green-Wood invited us to go on a trolley tour of the grounds. We had this wonderful tour guide, who was telling us this great story on the tour about the National Casket Company. That concept really stuck with us, and so the piece became about The Great American Casket Company.

Lynch - I think one of the first things we found was discovering the promise of a story within each of the different geographical locations in Green-Wood Cemetery.

Melby - There was architecture that we loved, and we knew that we would have this company that would rove around and take the audience around the cemetery. There were the opening fairgrounds! And the next spot we loved was calling to have a ritual performed there - and another place seemed like it should be a play within a play. Everything was just sort of kismet - David was in there, we just chipped him out.

KM - What is the most unexpected part you discovered while working on this project?

Melby - I have found it very inspiring to go to the space, and see what the space is calling for. I like to work with people who can pull off some creative, collaborative magic.

Lynch - I would describe this as akin to a devised theatre process. The whole context and text of the piece is taking shape at the same time as the music is - so we see opportunities for music in the storytelling, and then create pieces that are tailor made to those moments. This afternoon I was working on a little piece of instrumental music that is like an ad hoc marching band. We need it, because the physical space was calling for it as we are walking the audience to the next installation of the story, so the impetus for the story and music come directly from the space.

Lewis - By the standards of a professional theatre world, we are creating a year long project that is essentially being developed in 7 or 8 weeks. It's been a stressful but exciting process. As an ensemble, everyone is constantly busy in creation, all of the time. Andrew will get up at 8 to write a piece of music that at noon is sung by 10 people. Lyndsey and I will be acting in a scene, and then while Melby goes off to work on something else we'll sneak away and write new lines of dialogue to insert between one scene and the next. Everything is happening very quickly and on the fly, which is exciting.

Melby - I've been floored by the generosity of the folks at Green-Wood Cemetery. Everything we've asked, they've said yes! Do it. Put an aerialist in a tree. Go out on the lake. They want to make this cemetery a cultural destination, they want to make art.

Anderson - It's just so huge, it's almost 500 acres of massive rolling hills and opulent wealth through the ages. Back in the 1800s people were building huge statues to themselves. To me it just seems to be this trove of wealth and stories.

KM - How did creating a piece within Green-Wood Cemetery affect you?

Anderson - I think you think about your relationship with death, and how you treat it, how you prepare for it.

Lynch - I feel like you can't help but feel it when you walk into the cemetery - you feel it in yourself, you see it in other people - the way they interact with each other, the way they interact with the space. Clearly this is a part of life that people often ignore or don't deal with, you know? This just puts it front and center. You can get reverential or feel turned off by it, but you can't help feel something, you can't ignore it. It is so present there.

Melby - The theme of embracing death is allowing us to more fully appreciate our life living now.

Melby - Yes! I'm also remembering this story of people building their huge mausoleums that they would eventually be buried in - but they would party in them on the weekends. Just this feeling of, we're alive and we're not gonna get younger ...

KM - That's incredible! I can't imagine anyone in society today doing that.

Anderson - I think it was a musical theatre director who would throw parties in his mausoleum and got locked in one night by mistake and slept the night there. He said the best sleep he got was when he slept in his crypt. This was in the 1860s. Essentially, that's what we are doing now. We're meeting all of our friends, and we're dancing among the graves - which is a song that Andrew wrote.

Melby - And that is the wildness of BREAD.