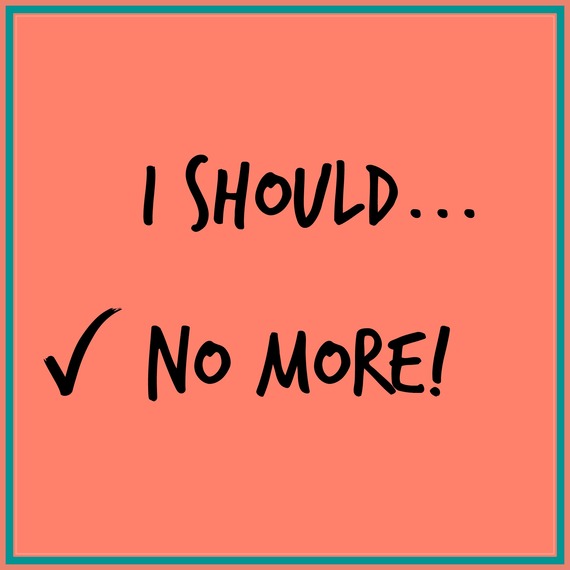 Lately I've been struck by how often I hear people begin their sentences with "I should..." For example:

• I should quit this job.

• I should get more sleep.

• I should cut back on sugar.

• I should have known better.

And of course the perennial (among yoga practitioners):

• I should meditate more often.

The person launching into a "should sentence" has a distinctive physical and energetic presentation. They are slumping, sighing, frowning, overall sounding and looking defeated. What I really hear behind their "I should..." ( AKA should-ing) is "I'm not good enough, I'm a failure, I'm pathetic." Talk about a small word that packs a punch! Words have a consciousness of their own. Some words uplift. Should is not one of those.

The Undesirable Heaviness of Should

The words we speak, or simply think, are all imbued with a unique emotional tone. What emotion can you hear echoing in the footsteps of should-ing? Not confidence for sure. I hear guilt, fear, a sense of inferiority and inadequacy, the (unfortunate) belief that something's wrong with me. This is the kind of emotional state that should-ing invites. The emotional waters you'll find yourself bathing in, sinking in, when punctuating too many of your conversations with this downer of a little word. In the end, should-ing is saying "I am never doing what I'm supposed to be doing, when or where I'm supposed to be doing it." Should-ing is basically beating yourself up without sounding (too much) like it. It's self judgment, pure and simple, and it will make you feel like crap. Is this the emotional state you want to nurture?

I didn't think so.

So what's the solution? Never use "should" again? That could work. But just refraining from should-ing isn't enough. Thoughts, whether spoken or not, carry the same vibration. What's needed is a shift in perspective and to reframe the situation. Instead of not talking about what you should (oops) be doing, how about focusing on what you are doing, in any given situation, that is working? How about celebrating your victories instead of highlighting your struggles? Using that approach, the previously cited examples could sound like this:

• I no longer add any sugar to my foods or drinks, that's a start. (My own reframe & rephrase)

• The little bit I meditate, I enjoy it. Or alternatively: I don't meditate because I don't enjoy it. (Radical self-honesty is refreshing.)

Perhaps your should-ing habit is just that, a linguistic habit you've unconsciously picked up along the way. With a little effort, a few weeks might be all you need to weed that word out of your vocabulary, and kickstart the new habit of highlighting your successes, no matter how small. Expect feeling much lighter.

What the World Needs Now...

...is definitely not another person beating themselves up. Next time you hear yourself should-ing, pause, reframe and rephrase. Should-ing may appear to be an inconsequential expression of violence, but I'll challenge you on that belief. As Buddha said "With our thoughts we make the world." For better or worse, our physical world begins taking shape at the vibrational level, with the thoughts we think, the emotions we feel. One tiny unkind thought, towards self or another, is not much, yet repeated over and over by billions of us thinking similar thoughts it will quickly snowball into a macrocosmic expression of unkindness, i.e a violent world. It seems to me we're already there.

So, as shootings, bombings and Donald Trump continue to dominate the news, how about slowing down on should-ing? Choosing self-compassion over judgment? Highlighting your victories while lovingly holding your shortcomings?
You never know, the world might be a better place for it.

Download
Calling all HuffPost superfans!
Sign up for membership to become a founding member and help shape HuffPost's next chapter
Join HuffPost
Follow Sylvie Barthelemy on Twitter: www.twitter.com/sylviebarth
Voting Made Easy
Register to vote and apply for an absentee ballot today
Register now