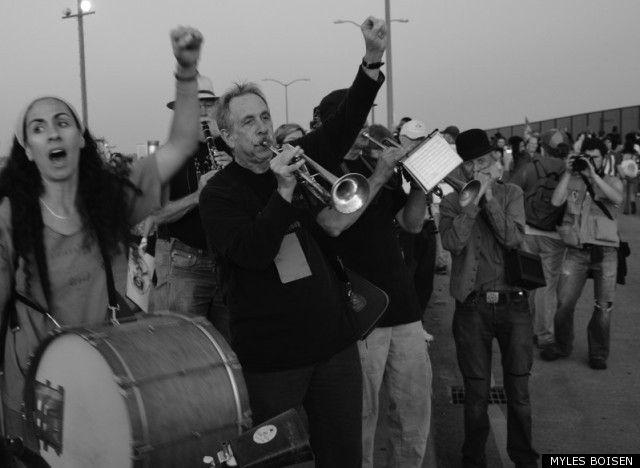 The last thing I read before I crashed Wednesday night were reports of vandalism in downtown Oakland, and of police once more clamping down on protestors with tear gas and rubber bullets.

Believe me, I get it. Breaking things is fun, and it brings a certain primitive satisfaction to watch something collapse or shatter at your own hand. Creating something is a lot harder; it takes longer than destroying something and takes even longer to learn the process of creation itself. Just ask any musician, painter, writer, sculptor, architect, engineer, mechanic or entrepreneur. This is largely why most creators achieve success in adulthood, while breaking things for fun or protest remains largely the act of children.

I spent a total of thirteen and a half hours with the Occupy Oakland General Strike last Wednesday. The atmosphere at Frank Ogawa (Oscar Grant) Plaza was nothing less than festive from the moment I stepped out of the BART station at the stroke of 9 a.m. Soon after, I was standing at 14th and Broadway with my bag containing swim goggles, dust masks, ear plugs, a spray bottle full of diluted antacid (for rinsing tear gas), a couple bottles of water and a few energy bars. In short, I was prepared for the worst but was greeted with an early morning street carnival.

There were virtually no cops in sight, and for the entire day, from 9 a.m until just after 4p.m, I dictated a running audio diary on my phone, in order to chronicle what I expected to be a tumultuous and raucous afternoon. The bulk of my transcriptions read something like this:

9:05 a.m. 14th and Broadway does not appear to be legally cordoned off. Crowd has filled the intersection; no cops to be seen; lots of clapping and cheering.

9:12 a.m. Occupy Oakland camp site is much denser than I expected and extremely well organized.

9:32 a.m. I'm at an extremely well-organized community food center, like something akin to the buffet table at a church social. For a group that was gassed, shot with rubber bullets and bean-bagged last week, this is a very upbeat lot.

And it goes on like that, all morning. The crowd defied the media stereotype that's been the popular myth since Occupy Wall Street took effect. Yeah, the dreadlocks and drum circles were there, but so were working professionals, parents, teachers, librarians, military veterans and, well, everyone. Even children.

The first helicopters appear at 10:41, during the first march of the day. The march does a circuit around downtown Oakland, stopping in front of the State building at various banks en route; there's chanting, signs stuck to the front doors, but nothing else. The graffiti and window-breaking come later, and they don't come from the march. My notes read, "11:09a.m. - march comes full circle back to street blockade. Mood extremely festive. People are pretty darned happy."

Soon after, the announcement comes that the local branches of Wells Fargo, Citibank, Bank of America and Chase have all shut down for the day. So, it's real now.

A little before 2 p.m, word spread that Whole Foods will fire any employee who misses work to participate in the strike. I expected resistance, of course, but I'm initially surprised to see it coming from Whole Foods, and without a hint of equivocation. After a moment, I'm surprised that I'm surprised.

At 3:30, the crowd begins to rally at 14th and Broadway for the march to the docks. By this point, the plaza is packed beyond capacity. It's impossible to move quickly, impossible to not bump into-- or get bumped by --scores of people as I go from one point to another. Still, the mood remains high, and every jostle from a stranger is followed by a courteous acknowledgement. I finally get out to the intersection to follow the march. The helicopters have been circling extremely low by this point, at roughly rooftop level of the Rite-Aid building at the rally intersection. At 4:19 p.m, the crowd marches. It's almost surreal, like a leisurely walk on a sunny day out of downtown through residential neighborhoods, but with several thousand friends. Families stand on their front porches and in their yards waving at us. The children likely think it's some sort of parade which, I suppose it could be.

For a while, it's just a throng of people marching to the sound of chants, helicopters, bullhorns and honking trucks, a cacophony I imagine is the signature noise of massive change (I heard a similar ruckus almost weekly while living in Bolivia). An hour later, we arrive at Adeline St., and the sign says, "Port of Oakland." Truck cabs are parked in the street, honking in solidarity. Demonstrators climb atop containers to take pictures of the crowd; a band has set up at the intersection and are playing a Dylan-esque rendition of "This Land Is Your Land" while a man on a stationary bike powers their amplifiers. The cyclist is impressive; their amplifiers are loud enough to drown out the helicopters.

The march has four berths to cover, so we split up. By 6:30, the group I'm with reaches the entry for the Horizon Freight Systems, and the real work begins. No workers have shown up, but they have signed on for work, which is apparently a pre-requisite for the arbitration to come. As for that, we now have to wait for the arbitrator to declare a health and safety hazard in order for the docks to be formally shut down.

And that's where the real work begins. It could take several hours for the declaration to be made, during which time we have to keep blocking the entryway. We're far from the plaza; there is no band or speaker's platform; the group has been fragmented among the different berths; we have no band or residences cheering us on. It's getting colder; there are as many as four helicopters flying overhead and we're seeing police vehicles nearby with greater frequency. But we have to stay where we are, and we don't know for how long.

We hold the line for the next two or three hours, not without some tension. Rumors are rampant; some members of the group want to split off and go elsewhere. The organizers do their best to communicate to everyone via bullhorns and maintain solidarity. We vote and ultimately stay together. Food is coming, then it's not; we're out of water; water shows up and is quickly consumed; there are only two toilets, both a quarter mile away in opposite directions. While the group thins out a little, we manage to stay together in numbers sufficient to keep the Horizon driveways blocked.

At about 9:15 p.m, one of the organizers announces that the Port of Oakland is officially closed. The cheers are deafening. Now all we have to do is walk back to the plaza to celebrate. I'm exhausted, and very tempted to jump on the first BART station I see and head back home, but I want to see everyone at the plaza. On the way back, there's not as much chanting, but there is lots of horn honking and cheering. At one intersection, I see an unmarked police car. A woman next to me shouts out, "I hope Oakland made you proud tonight, officer!"

The cop leans out his window and says, "You did."

And that's who we are. The self-styled "anarchists," the taggers and smashers, they're a minority. The Occupiers are not anarchists. We do not want to destroy our government, because we know how much time and sacrifice it took to create. We like our government, we really do.

That's why we want it back. 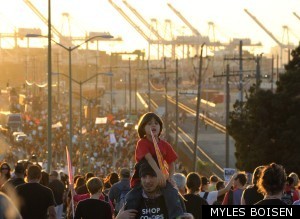 Craig Clevenger is the author of the novels, "The Contortionist's Handbook" and "Dermaphoria." He lives and writes in San Francisco and can be found at http://craigclevenger.com.