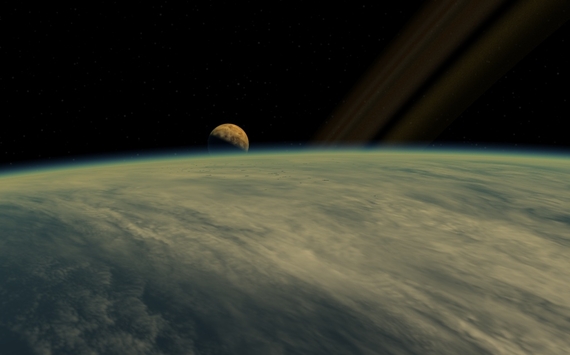 The Drake Equation is a thought problem created in 1961 by Astronomer Frank Drake that contained a number of factors that taken together could produce a number meant to indicate how many intelligent and detectable civilizations may exist in the Milky Way galaxy which is our home in the Universe.

The classical equation looks like this where all the factors are multiplied together:

The factors break down as:
N = number of alien civilizations in the Milky Way

The Drake equation actually required guesses for many important factors. It also provided the means to quantify with a value the number of potential civilizations that emitted some form of intelligent signals that could be picked up by our current technology at the time. Drake had formulated this equation prior to any Exoplanet research and finds but as it turns out, those finds change everything...

As you can imagine and for those familiar with the equation, we dont have actual data for MOST of the Classical Drake equation factors, but they are guesses, based on human trends, human technology leaps, and so on. So with only one known life-bearing planet at the time, ours, the calculation of the ultimate value for the Drake Equation was always a conservative guess based on comparison to the progress of human civilization and the technologic precipices we faced. Naturally we dont yet know of any advanced civilization. We are all we know. We represent a single data point and only one such point is not sufficient to create a trend or an understanding.

With the most recent additions to the Exoplanet list however we at least have a way to make more educated guesses for some of the Drake factors using statistical sampling of known data. We still dont have the proof of extraterrestrial intelligent life yet but some of the Drake factors can be addressed with more accuracy. In our current Exoplanet count we puts the total number of Exoplanets somewhat north of 3300. This is very exciting. Originally the planet hunting results were more limited, providing us with the ability to find only the biggest Jupiter sized planets. But as techniques were honed to a finer art, we started to find smaller more Earth sized planets.

In the Exoplanet catalog of known planets a fair number of our confirmed planets are known as "Super-Earths". The term is the nomenclature applied to any planet that is under 10 Earth masses. Super-Earth implies Earth -like I know but the term doesnt distinguish between planets that are habitable or not. It just says that if its between 1 and 10 times Earth's mass, its a Super-Earth. Such a planet could be a massive paradise, a seething maelstrom of gases, or an airless rock.

The ability to find such planets however represents a significant improvement in planet detection capability. Currently it is theorized in some circles that as many as 10% of the stars in our galaxy may have suitable habitable zone planets, which is a number between 10 billion and 40 billion. There are more conservative estimates as well but these numbers are also in mainstream thought.

A number of factors in the equation have requirements not readily apparent. The planet must be in that habitable zone around its star. If you read my Huffington Post blog article on Habitable Zones you know that this zone is that not too hot not to cold region around any star where a planet could support liquid water and could manage to hold onto an atmosphere. In addition to the habitable zone requirement, a stable star is also a requirement. Such a restriction removes a number of hotter more energetic stars from our hunting list because the radiation and strong stellar winds emanating from those particular stars would likely have blown the atmospheres off the planets or irradiated their surfaces to sterility.

(You can read about this in Understanding Exoplanets : The Habitable Zone at http://www.huffingtonpost.com/marc-dantonio/ )

Returning to the Drake Equation, we have to consider that when Frank Drake wrote up the thought problem that eventually became the Drake Equation, he did this THIRTY FOUR YEARS before Exoplanet searches started producing some candidates and confirmed results... We had no confirmed Exoplanets up until that point. Drake had to formulate the equation without a single planet other than the Earth as a starting point.

So as more data was obtained, analyzed and as more planets were added to the list, it became more obvious that the Classical Drake Equation no longer worked as the complexity of each term increased, Thus, the Drake Equation was reworked by a number of organizations and dozens of new papers were written addressing the new data and how it bodes for life in the Universe.

These days the Drake Equation two particular versions of the re-imagined Drake equation take front and center and produce different results between them. Both I am happy to say are more optimistic. One version linked below appears in Astrobiology magazine, and discusses the Drake equation from two separate trains of thought: The Classical Drake equation and the Statistical Drake equation. The Statistical version is a much more complex equation that takes into account various new potential paths that an alien civilization can traverse on its way to being a star faring society.

The second version, a similarly credible version postulated by an MIT professor changes some of the original parameters in the equation to better suit the known data. For instance, that version directly considers the stability of the star system, a key factor when trying to find long term suitability for life like us.

Looking at the Drake Equation with these new eyes and most especially with new data suggests a very DIFFERENT outlook than Frank Drake had postulated. New data brings us new outlooks and the new Drake equations showcase the new data and how it works for us to better understand the Universe.

One thing that the articles linked below dont directly address other than in passing is the capability of a civilization to utilize advanced propulsion such as the Alcubierre Drive which is a 'warp' drive of sorts. The reason is one of focus. The new formulations to the Drake equation care only about whether a civilization can be detected. It doesn't address interstellar travel. It is enough that they are detectable and that is what the equation is meant to help puzzle out.

Considering the variations that MUST exist, formulating an answer to the statistical version of the Drake Equation indicates there are potentially between 0 and more than 15000 advanced societies in our galaxy alone.

In Addition, Sara Seager at MIT utilized the current finds in Exoplanet research and a new approach that doesn't make the Drake equation obsolete but creates another "new edition" that helps us predict the probability of detecting another civilization.

Her calculations of a sample of 30,000 stars gives N=2. This means that in her sample of 30,000 stars there are potentially 2 star systems that are predicted to show detectable, active life on a habitable zone planet. 2 civilizations seems a bit pessimistic at first glance but that number conceals a vast probability when you consider all of the stars in the galaxy and extrapolate. Why?

What does this all mean? It means, significantly, that science is on the side of those who suspect that there is other reasonably intelligent life in the Universe. Whether it is space faring or not is beyond the scope of the equation as is a prediction of such a civilization's technological level. In my book "The Populated Universe" I discuss the many places we see the fundamental building blocks of life in the Universe.

The Universe makes these necessary items naturally without our help and we are here because of this process. So my supposition is that Life is the RULE not the exception. It is a big step to commit to that line of thinking because that position still depends on an expectation of scientific discovery that has yet to be made. But I am comfortable looking up on a starry night and mulling over the possibilities!

I hope you enjoyed this foray into the Drake equation and the children it has generated!