"Brazilian graffiti art is considered among the most significant strand[s] of a global urban art movement, and its diversity defies the increasing homogeneity of world graffiti." - Design Week

In March 2009, the Brazilian government passed law 706/07 making street art and graffiti legal if done with the consent of building owners. As progressive of a policy as this may sound, the legislation is actually a reflection of the evolving landscape in Brazilian street art, an emerging and divergent movement in the global street art landscape.

Rio de Janeiro has been particularly progressive in its policy towards street art, with its 1999 "Não pixe, grafite" (Don't Tag, Graffiti) project that brought together 35 graffiti artists to showcase diversity in local styles. But more unique is the evolution of a permission hierarchy, blurring the line between formal and informal. The new street art law merely reinforced these unique patterns of street art and legitimized an already flourishing form of artistic expression. 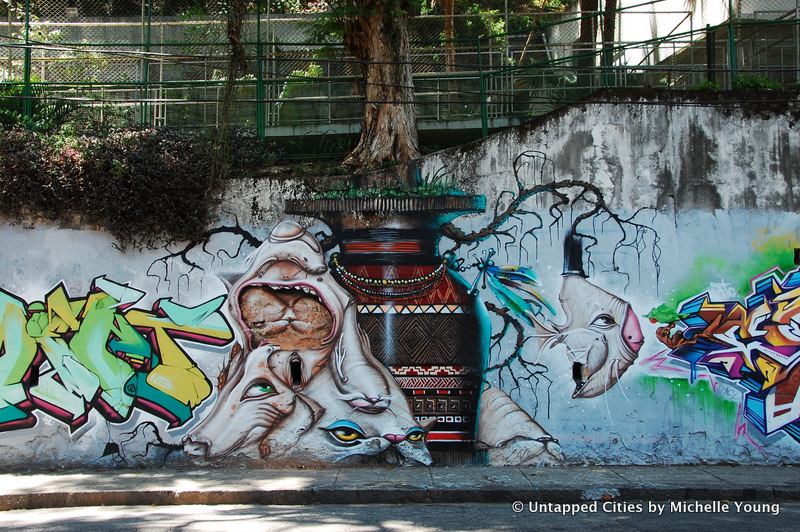 In Brazil, there is a distinction made between tagging, known as pichação, and grafite, a street art style distinctive to Brazil. This distinction also has a sociological bent -- as Rio street artist Smael Vagner describes, "the tagger wants to put his name on the wall, to be famous, and is a vandalist, but the [street] artist is interested in aesthetics and community."

According to Quito, an artist in Rio, street art is really an agreement between the population and the city. The movement began to flourish in Rio over the past 10 years, and it's currently having its "moment" with Rio artists going abroad to make their mark on foreign cities -- and graffiti artists from around the world are coming to the city to check out what's happening. Crews of graffiti teams sign their work and some artists even leave a contact email. 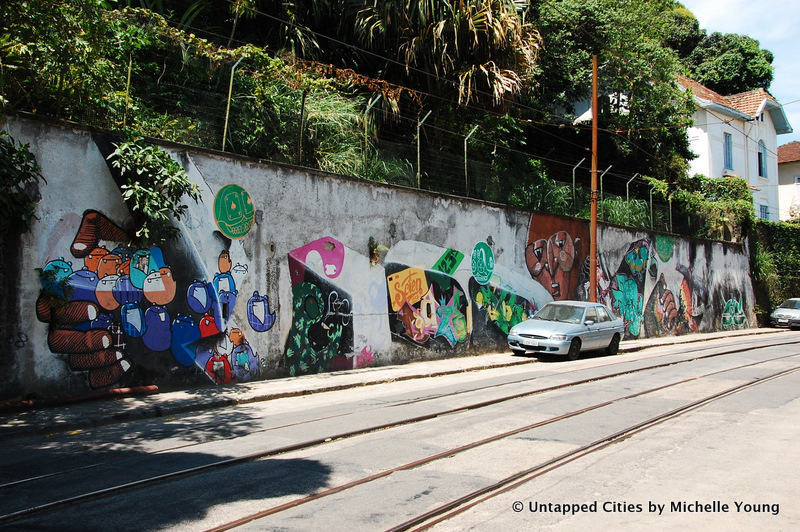 Retaining walls on the steep terrain provide canvases for artists

In Rio de Janeiro, street art is ubiquitous. It exists in all corners of the city, from the favelas to upper class neighborhoods, from residential to institutional. It is bold in scale and aesthetics and is anything but graffiti. The urban fabric of Rio de Janeiro also figures prominently in the evolving street art scene. The high walls, whether for security or to contain the topography, provide ample surfaces for painting. But rather than location dictating art, the relationship between owner and artist has a direct impact on where street art occurs.

Owners of buildings, both residential and commercial, sometimes invite artists for commissions, which is done to protect from tagging, as an aesthetic choice or as an economic choice -- painting a façade with art may be cheaper than another mode of beautification. In another case, street artists ask permission from the owner. 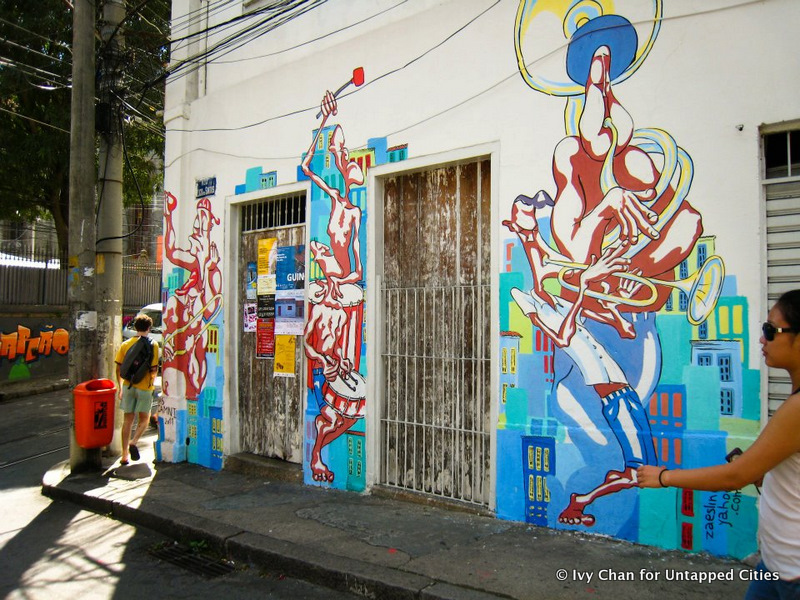 While the majority of street art continues to be created illicitly or at locations with no clear ownership, the existence of these new partnerships marks a striking shift in the production of street art and its relationship with the community. Painted walls turn basic infrastructure into active spots of engagement, creating new informal public spaces that dialogue between residents and their city. 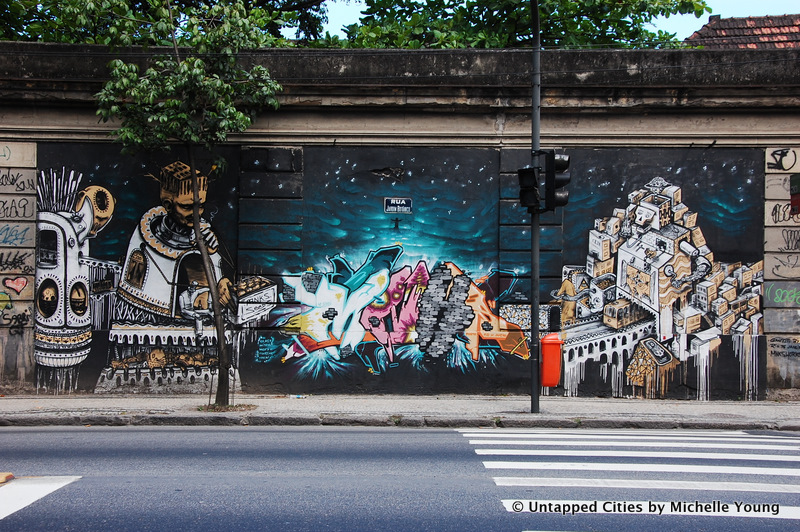 The idea of creating a community is one of the strongest undercurrents I observed in Rio's street art scene, whether through city-run initiatives, individual projects or local community groups. One strategy is for the city to permit large-scale graffiti on underutilized walls by limiting "paint-overs." The most prominent example is the half-mile stretch along the walls of the Jockey Club situated across from the Botanical Garden (Jardim Botânico).

According to Lu Olivero of the AEROSOuL CARIOCA project, Rio's street artists come to this wall to "make a name for themselves. It is, in my estimation, the largest collection of street art in the city, reserved for only the best. If Street Art had a professional league, the wall at Jardim Botânico would be the NBA."

Some large-scale community projects are initiated by artists, such as the well-known "Women Are Heroes," where French artist JR famously canvassed the Providencia favela in Rio de Janeiro with the eyes of women who had lost a loved one in violence with the police, or the colorful façade of the Santa Marta favela, an initiative of artists Jeroen Koolhaas and Dre Urhahn, in conjunction with the Let's Colour Project. More often however, street art occurs as patches of small-scale interventions and permanent organizations have cropped up to promote the movement and to create opportunities for employment.

Projeto Queto is a community center founded by Francisco da Silva, the leader of graffiti team Nação Crew, in Sampaoi, a favela in Rio's north zone. Those involved speak of the inspirational potential of graffiti in the favelas, along with its ability to establish discipline and structure.

Graffiti has created a new horizon for young people that have gone on to become artists and teachers. There are cases in which drug traffickers are now graffiti artists. It's a gateway to a new perspective on life for the poor in favelas who don't have other opportunities.

While it is too soon to tell if these statements are utopian hopes, it is clear that the momentum for street art at the community level is strong and the city and state are on board to help create an environment in which it can flourish.