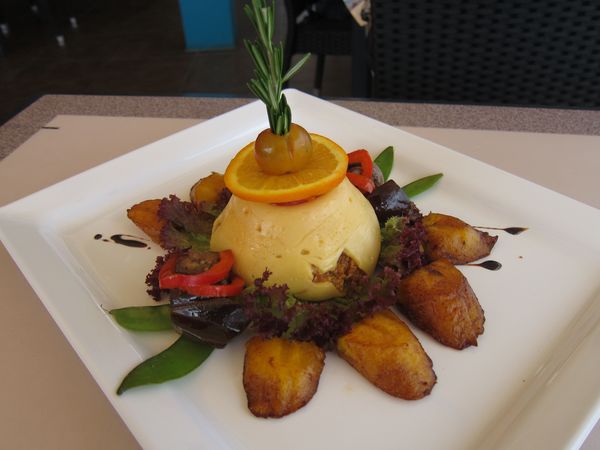 French gastronome Brillat-Savarin once noted that "the discovery of a new dish confers more happiness on humanity than the discovery of a new star." Works for me... and recently, too! After a few days spent on the enchanting Caribbean island of Curaçao last week, I discovered keshi yena, Curaçaoan stuffed cheese, a local main-course dish that IS a star, makes me profoundly happy -- and, at the same time, functions as a guide to the turbulent history of this fascinating country.

But where is Curaçao? And what on earth is Curaçaoan food?

The island, at the extreme south of the Caribbean, lies just 38 miles north of Venezuela, South America. A great deal of Curaçao's produce and products, in fact, come from South America -- but these raw materials are whirled into the kaleidoscope of Curaçaoan cuisine by the local chefs, who absorb all influences, then season them liberally with a Caribbean flair.

It was the historical presence of so many would-be marauders and conquerors that has spawned the polyglot nature of Curaçaoan cuisine; everyone over the years tried for a piece of the magnificent deep-water harbor at the capital city of Willemstad -- from the Spanish, to the French, the Portuguese, the British, the South Asians, and many more. However, one seafaring group above all figured prominently in the past and present of Curaçao: the Dutch, who occupied the country in 1634, and to this day, from across the Atlantic, include Curaçao as an independent country in the Kingdom of the Netherlands (which finally granted full autonomy to Curaçao just over a year ago, in 2010, though Holland and Curaçao are still officially confederated).

Dutch is everywhere in Curaçao -- from the Amsterdam-like commercial buildings with curlicue eaves, to the stately Northern European-style administrative palaces, to the many charming street signs completely in Dutch. The national language here is not Dutch... but Dutch, among other languages, figured heavily in the development of Papiamento, Curaçao's national tongue. 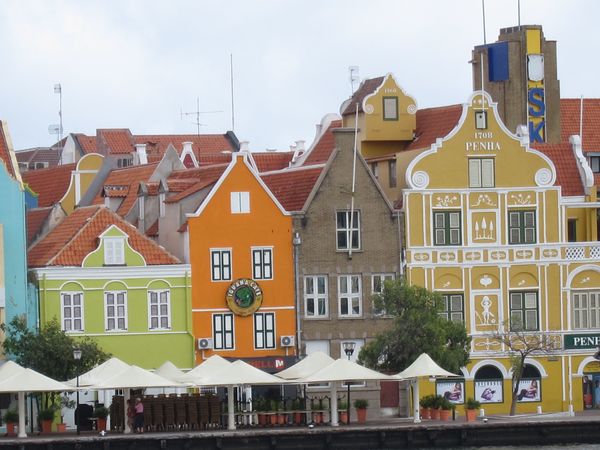 It was also the Dutch who inadvertently put the country on the path to its gastronomic centerpiece, keshi yena (a Papiamento phrase, sprung from the Dutch word "kase," meaning cheese.) Unfortunately, the tale starts in shame and horror -- which have spawned, along with the dish, a Curaçaoan historical element that today's visitor can hardly miss. Nor would want to.

Here's the reality. In the 17th century, the Dutch, involved in much New World commerce through their West Indies Company, were slave traders extraordinaire. It was most prominently the Dutch who captured millions of West Africans, stripped them, forced them into inconceivably cruel conditions on ships that took three to four months to arrive in the New World -- where they encountered more horrors still. And the port of call? Yes. Very often Curaçao, which, under the Dutch watch, became the center of the entire slave trade on this side of the Atlantic. If you visit Curaçao, you can track the vivid history of all this at Museum Kurá Hulanda, in Willemstad, which locals call "the slavery museum." As well as an important teaching center, it is an incredibly moving monument to the sorrows of a people.

Some of the luckier slaves, of course, encountered slightly milder conditions in Curaçao, avoiding the brutal fields, and working in the kitchens of the plantation houses (many of which still stand today across the island, receiving tourists). When it came to the table, the Dutch liked their Gouda cheese, and their Edam cheese -- both of them shipped to Curaçao in round formats. The Dutch "masters" couldn't be bothered with the rind of these cheeses, so the milky-creamy part at the center of the cheese got scooped out and consumed; the hollowed-out cheese shells were returned to the kitchen as refuse.

Often, the slave is wiser than the master; they certainly were in this case. The kitchen workers noticed other foods coming back from the dining room -- such as pieces of chicken and other meats, left over from stews. It was a logical leap from there: Season the meats, add something a little sweet (like raisins), add some favorite island ingredients (today, olives are common), stuff the cheese shells with the meat mixture, and steam the stuffed cheeses gently in a bain-marie for a few hours. The result is a perfect marriage of cultures: the stolid creaminess of the North meets the lively spiciness of the South.

Hundreds of years later, the keshi yena has gone through some changes. But any visiting gastronome on the hunt for real local tastes that fuse cultures should seek it out. Though the dish had fallen out of favor some years ago -- as many of the most popular Curaçao restaurants moved towards "international food" -- keshi yena is having a resurgence now, as is pride in all things truly Curaçaoan.

When you go on the keshi yena hunt, the first thing you'll notice is diversity: The three keshi yena I tasted were vastly different from each other.

For starters, modern keshi yena is not made any longer in the hollowed-out shell of a gouda round; it is, instead, an approximation of what once was. The question is: How approximate is it?

Many contemporary chefs think the idea of "round" is essential to the spirit of the dish -- and shape a ball of keshi yena by lining the bottom and sides of a round bowl with Gouda (or Edam) slices, topping the slices with the meaty filling (mostly chicken today), then covering the whole with more slices of cheese, effectively creating a stuffed round. It can be cooked in a steam bath, or baked in the oven, but the result is the same: the diner gets a big ball of stuffed cheese. Unless the chef chooses otherwise!

The purest, most straightfoward keshi yena that I tasted in Curaçao was at La Bahia ($18), a terrace restaurant on the Otrabanda side of the St. Anna Bay, looking across directly at the colorful historic buildings known as the Handelschade. 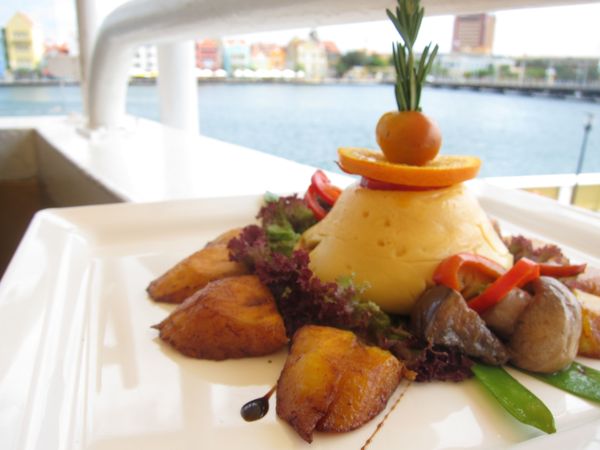 (The keshi yena at La Bahia)

The restaurant is simple, and the keshi yena is direct: The cheese casing is ultra-thick, made from good slices of aged Gouda (the cheese is a little darker in color here, due to the age). Inside is a meaty combo reminiscent of chili con carne, or sloppy joe -- that is, the meat gets a fine grind. The meaty pebbles swim inside in a spicy-tomato-y sauce, and when you break into the mold, there are few distractions from the meat-and-cheese encounter (other than the now-obligatory garnishes). 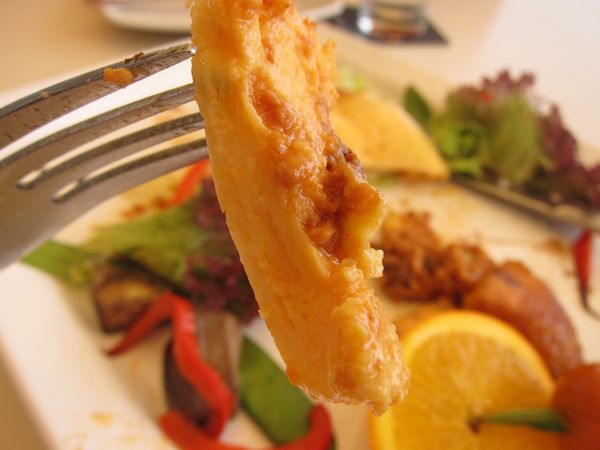 (A cross-section of the thick cheese cover in La Bahia's keshi yena, with ground meat clinging to underside)

A much fancier restaurant also preserves the stuffed-ball idea: La Belle Terrace, one of the restaurants available to guests and public alike at the gorgeous Avila Hotel. Under a spreading tree that is called, against all odds, a flamboyant tree, the Belle Terrace chef serves up another cheese dome ($21) -- but with differences. Here, the chicken is not ground, but shredded into long strips, and the raisins and olives get more play. Most important, the keshi yena is smothered with a "Creole" sauce -- meaning lots of tomatoes and peppers -- that quashes the meat-cheese dynamic, but lifts the dish to a sweeter, livelier intensity. 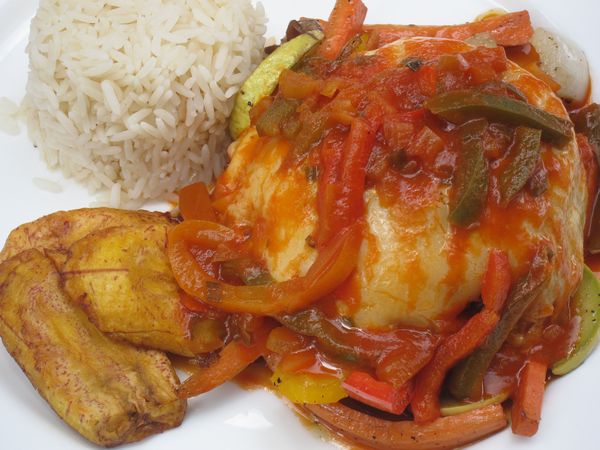 It is worth checking out this keshi yena, available every day except Sunday -- if for no reason other than the resort-like Avila Hotel itself, my favorite hotel on the island, drenched in history and here-ness, in the quaint neighborhood of Penstraat, within the city limits of Willemstad. 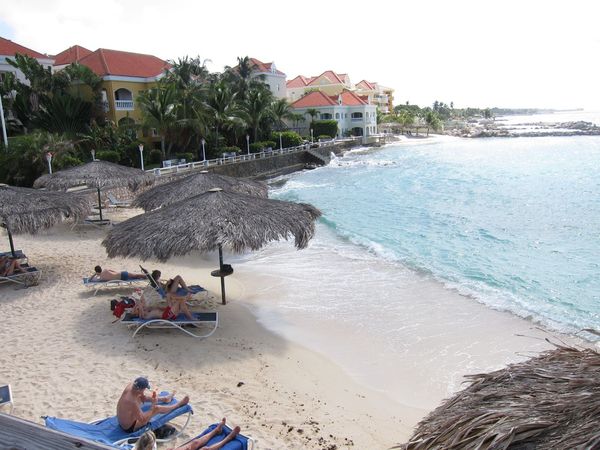 (The beach at the Avila Hotel, near La Belle Terrace restaurant)

Last, but far from least, is the Gouverneur -- a restaurant institution in downtown Otrabanda, with great views of the bay, and a much more historic feel than nearby restaurant La Bahia. But the chef here is not having history in his Keshi Yena ($18): He has abandoned the orb, turned the chicken into big, juicy chunks. and substituted prunes for raisins. 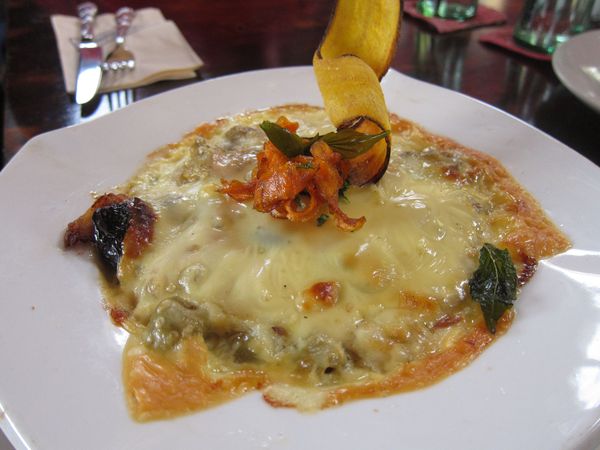 It is a super-sized keshi yena, that seems more like a gratin dish than stuffed cheese. That said -- and I hate my revisionist, anti-historical posture here, but so it goes -- the Gouverneur Keshi Yena is my favorite of the three keshi yenas I tasted. The browned, crusty cheese that the gratin process yields has a wonderful flavor, like the topping of onion soup -- and the large pieces of chicken also recall something from a fine French bistro. 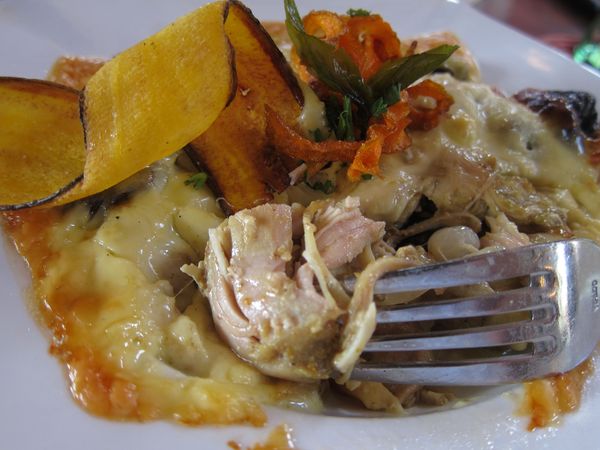 Go to Curacao, by all means, for its beautiful beaches, world-class diving, and burgeoning art scene -- but do not miss this delicious reminder of history on a plate, in any of its modern avatars.