Excerpted from Stranger Here: How Weight-Loss Surgery Transformed My Body and Messed with My Head 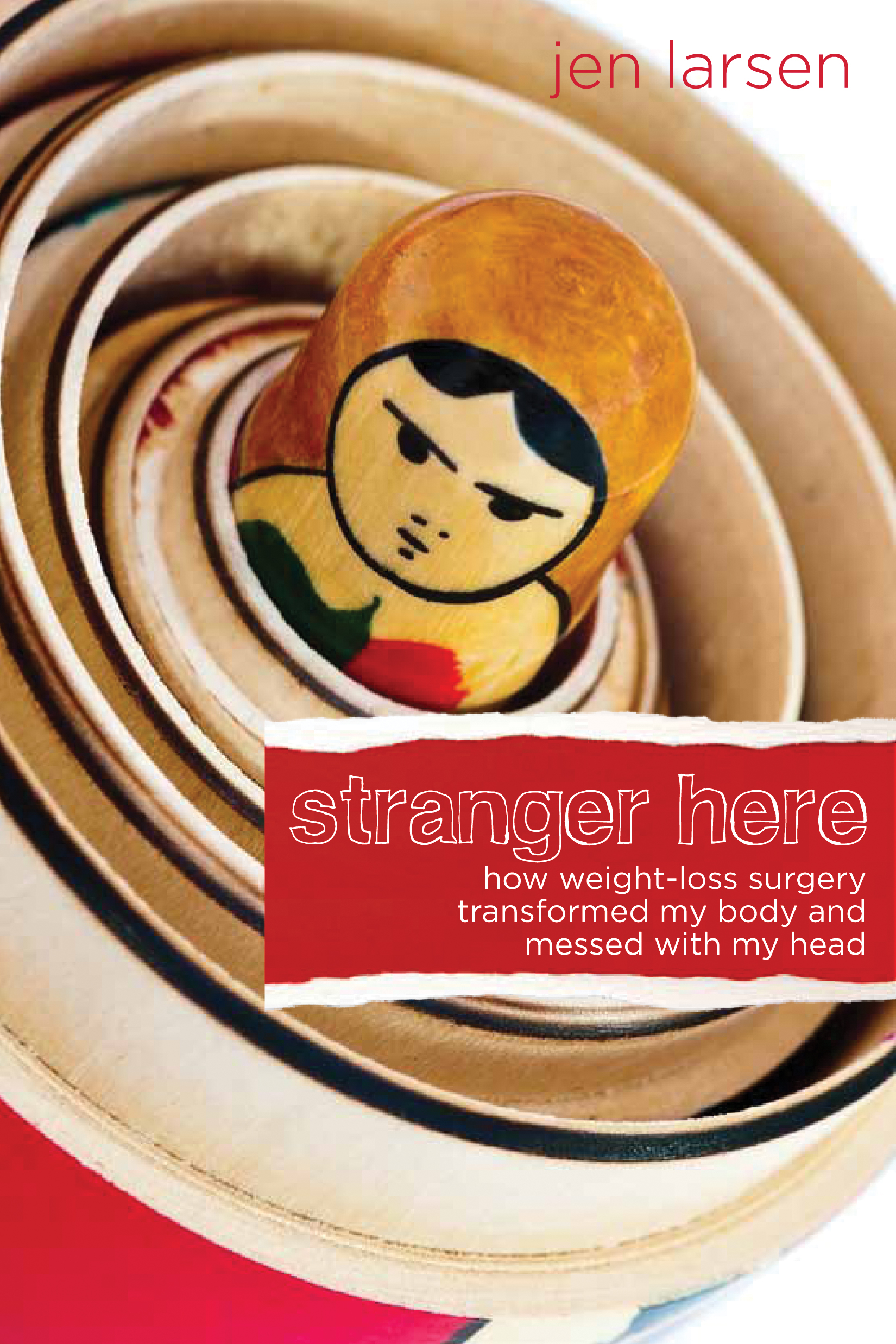 At work, clients sent us huge gift baskets of chocolates or donuts or gourmet banana bread. Women with their glossy hair and their expensive shoes and tiny pants, men in their tight polo shirts and skinny jeans and shiny belts, they all brought salads for lunch in stacks of Tupperware containers for maximum freshness. Account directors and project managers and studio people --they'd carefully assemble their salads on a large glass plate, add a sprinkle of flaxseeds, and set a small dish of fat-free vinaigrette on the side of the plate, while at their elbow would be a three-foot chocolate Easter bunny. They'd turn and march out of the kitchen without even looking at the city block worth of dark gourmet chocolate staring at them.

Or sometimes they'd glance over at an entire platter of hand-assembled sandwich cookies, dipped in powdered gold, while they were carefully slicing their braised tofu on top of a leaf, and they'd say, almost regretfully, as if it were a real problem, "Oh, that looks so good." Almost apologetically, "I only want a taste, though. Just a taste." And they'd take a knife and actually carefully, surgically remove a thumb-wide section from a cookie smaller than a drink coaster. Some afternoons I'd come into the kitchen and there would be an entire platter filled with donuts, each with just a chunk neatly removed because someone only wanted a taste. The tiny galley kitchen was always busy, people rushing in and out with giant mugs of coffee fueling their creative rampages, and everyone only wanted a taste. They were happy, and skinny. Why didn't they want more?

When an email went out -- gift in the kitchen, leftovers from a meeting, I have brought in the bounty from my chocolate tree and wish to share it with all of you on the fifth floor, I had to stop myself from bolting from my chair. Free food has always been a kind of trigger, a siren song, an irresistible invitation. If I didn't fall on the free food and devour it immediately, when would it come around again? How could I miss this golden opportunity, which might never return?

Me, rushing to the kitchen. Alone, looking at the half of a cake sitting there in a throne of crumbs, wondering how big a slice I could take and how quickly I could smuggle it out and back. I'd need a napkin to hide it. I'd need a really big knife. I'd need a smaller plate, so no one could tell that I was toting around half of a half of a cake.

One Friday I was digging a blade through that day's cake, carving out a piece as wide as my hand, when an account manager walked in. You could tell by the shoes.

"Oh!" she said. "Cake! How nice. There's always so much junk around here." She opened the fridge, tossed back her hair, and plucked out a low-fat yogurt.

"I know!" I said. And I was skinny, but I still found myself saying, "I haven't eaten all day. And I could use the sugar rush, you know?"

But this woman (a size zero, I would bet half my slice of cake) was having low-fat yogurt for dessert, and she was eyeing the cake like calories were contagious, and I was lying so that she thought I was like her. I plopped my enormous slice onto my plate. It bled strawberry all over the counter. I licked my fingers, thought about scooping up the stray piece of frosting left behind --technically part of my slice, so it belonged to me anyway -- but I got control of myself.

"I don't know how you do it, girl," she said. She rummaged around for a spoon in the mess of a silverware drawer. "Stay so skinny and eat like that."

I was wearing my new matchstick plaid jeans and bronze heels and a silk cami. No one would know I had gotten surgical intervention unless I told them. Instead, I lied. When someone asked me, how can you eat whatever you want? How do you stay so skinny? I would shrug.

But sometimes, sometimes, I would bring up the fact that I had lost 180 pounds, just to see the looks on their faces -- You? Never! Not possible! Look how slender you are! and then, How did you do it?

Every single time, I lied. I said, "a lot of protein," mostly, and tried to change the subject. I mean, that was totally true, right? It just left out some tiny details. Insignificant details. Details like, I had once hated myself and my body so much I got surgery to change who I was. Details I didn't like remembering.

"Oh! Well," I said brightly to my skinny coworker. I covered over my slice with a napkin and grabbed my fork. "Have a good afternoon!" I bolted.

And I was briefly, incandescently angry, because I should have been able to eat whatever I wanted. I shouldn't have been sneaking cake.

And I knew I would still rather be skinny in this wreck of a body than have stayed fat in that wreck, because life was so much easier here.