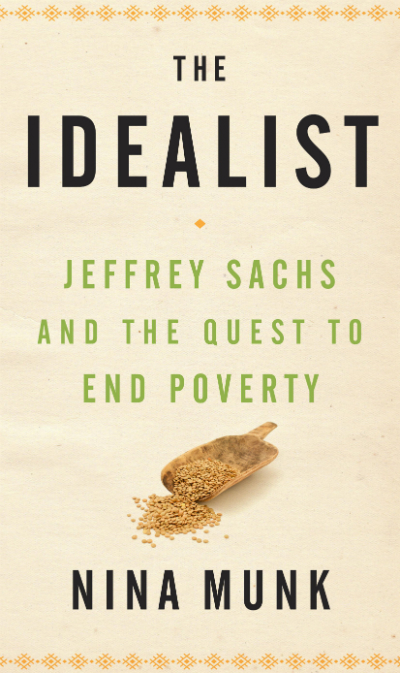 In the first of three excerpts from her powerful new book, The Idealist: Jeffrey Sachs and the Quest to End Poverty, Nina Munk takes us to a one of the most inhospitable places on earth, a remote village on the border of Somalia and Kenya where each day is a struggle to overcome hunger, drought, and disease.

The Idealist is the result of more than six years of reporting on the Millennium Villages Project, an experiment designed to put into practice the economist Jeffrey Sachs's controversial theories on ending poverty. Sachs, author of the bestselling book The End of Poverty, believes that with the right interventions, enough determination, and enough money, we can wipe out extreme poverty in our lifetime. Backed by $120 million from George Soros and other donors, he launched the Millennium Villages Project in 2006 with a dozen model villages in ten sub-Saharan countries. Once his approach was validated, it would be scaled up across the entire continent. At least that was the idea. The Idealist is the story of what happens when the abstract theories of a brilliant, driven man meet the messy reality of human life.

The following is excerpted from The Idealist: Jeffrey Sachs and the Quest to End Poverty, available this month from Random House. To read parts two and three, click here and here.

When Jeffrey Sachs first heard about Dertu, it wasn't on the official map of Kenya or any other map he'd seen. He wanted each of his Millennium villages to represent a different agro- ecological zone, and someone, perhaps a well-connected government official from North Eastern Province, proposed Dertu as an exemplary semiarid, nomadic pastoralist community. It is located somewhere in North Eastern Province, a degree or so above the equator and not far from the Somali border. Insofar as Dertu existed, its reason for being was a borehole--a water well drilled in 1997 by UNICEF in an otherwise arid, inhospitable stretch of land.

Thanks to the borehole, Dertu had become a crucial stopping-off point for the region's nomadic pastoralists. All day and sometimes through the night, they arrived with their caravans of camels, long-horned cattle, donkeys, and sheep. You could tell they were approaching by the clouds of dust that rose and drifted across the dry savanna--camels piled high with bundles of twigs, cooking utensils, wooden milk bowls, plastic buckets, woven-grass mats, and small children; donkeys loaded down with yellow jerry cans secured with braided- leather ropes.

There was no economy to speak of in Dertu. Here and there the nomadic herdsmen passing through would trade or sell livestock, and a modest business was established to sell camel's milk; otherwise, the only economic activities were gun running and cattle raiding.

"What we're talking about here is a community that is barely surviving," Sachs remarked. "Violent poverty, natural hazards, conflict, degradation of the environment--objectively speaking, it doesn't get harder than this."

Sachs had read all about Dertu, and for him the place represented an irresistible challenge: "I mean, what we are starting with here is a baseline that is not only below normal standards, but below minimum standards." If his theories on ending poverty could work here, in one of the most deprived places on earth, they could work anywhere. It was Ahmed Mohamed's job to lift the people of Dertu out of extreme poverty. Hired by the Millennium Villages Project in March 2006, one year after completing his Ph.D. in Belgium, Ahmed was responsible for implementing what he referred to, admiringly, as "the Great Professor's Ideas"--the Great Professor being Jeffrey Sachs.

Step by step, intervention by intervention, an official Millennium Villages Handbook prescribed the course of action to be followed by "change agents" assigned to each village. A 147-page, single-spaced document written by twenty-nine academics, mostly from Columbia University, the handbook features dozens of flow charts, protocols, organizational tables, benchmarks, timelines, and hopeful objectives. As Dertu's designated change agent, Ahmed set out to eradicate extreme poverty by following the Millennium Villages Handbook to the letter.

In early 2006 he recruited a team of five educated Somalis from other NGOs and got to work. He'd had no training or experience in economic development, but he was full of optimism. With so much money flowing directly from New York into Dertu--a massive infusion of over half a million dollars during the first year--he could accomplish a great deal. Imagine the potential impact of such largesse!

"With just a few interventions--ambulances, mobile clinics, a cell network--you could make a huge difference," Sachs assured Ahmed when they met. "With improved inputs, veterinary care, better breeding, a farmers' cooperative, tapping the Tana River . . . There's a tremendous amount to be done."

For all that, Dertu was perhaps the most challenging of all the Millennium villages. Just getting basic supplies there from Nairobi took weeks, sometimes months. Early in Ahmed's tenure, a mechanical part that was needed to repair one of the well's generators took four months to arrive. When the part did arrive, no one in Dertu knew what to do with it (skilled labor being practically nonexistent among camel herders). Eventually, at considerable expense to the Millennium project, a mechanic was summoned from downcountry.

The closest "city," the chaotic frontier town of Garissa, was only sixty miles south of Dertu, and yet the drive took four hours or more on a good day. When the rains came, the dirt track deteriorated into "soup," as the locals call it, and the drive could take an entire day. Drivers heading to Dertu rarely made it out of second gear as their trucks bounced along the narrow track, swerving to avoid ruts and boulders and thornbushes. (There's a good reason for the stacks of spare tires carried behind and on the roofs of Land Rovers in North Eastern Province.)

Without proper roads, how do you reach a nomadic population spread thinly over 750 square kilometers (around 300 square miles)? Ahmed and his staff spent months trekking into the bush, spreading the word, encouraging cooperation, and convincing skeptical elders to support the Millennium Villages Project. Because there were no staff quarters in Dertu, Ahmed and his team slept outside, or else they commuted across the rough terrain, back and forth to Garissa, sharing the project's one vehicle. It wasn't long before the vehicle, a cheap pickup truck, had to be written off.

Ahmed faced challenges, one after another, that the authors of the Millennium Villages Handbook hadn't anticipated. Entire chapters had been devoted to improving agriculture yields, boosting school enrollment, and promoting gender equality. But nothing in the handbook told the change agents how to reduce crime. Ahmed hired police escorts to protect his team from banditry and tribal clashes. He also hired security guards (two for night, two for day) to guard the Millennium project's compound. Nevertheless, shortly after the Millennium Villages Project was established in Dertu, Ahmed's health coordinator, Fatuma Mohamed Shide, was clubbed senseless in a fight between two Somali subclans.

Nor did the handbook address the subject of natural disasters. By the time Ahmed accepted the job with the Millennium Villages Project in 2006, the water well in Dertu had dried up. Since 2002, the entire Horn of Africa had been suffering from drought. The situation was so dire in Dertu that Oxfam was delivering water once or twice a week in tanker trucks. With every visit, each household received a twenty-liter (5.3-gallon) allotment of water. But twenty liters was not nearly enough; many people had to walk hours, sometimes days, in search of water. Herds of cattle died. Dertu's undernourished camels stopped producing milk.

Ahmed received approval from the higher-ups in New York to spend part of his budget on imported water. Day after day, for months, tanker trucks paid for by the Millennium Villages Project kept the people of Dertu alive.

At last, in October 2006, the heavens opened and the rains came: a drop or two at first, then the deluge. Rushing to save themselves from the floodwaters, the people of Dertu lost everything they had, which, God knows, was little enough to begin with. Whatever headway Ahmed made in his first few months on the job was washed away by the floods.