"The Olympic Family will feel at home in Sochi" - President Vladimir Putin in a speech to the IOC, 2007 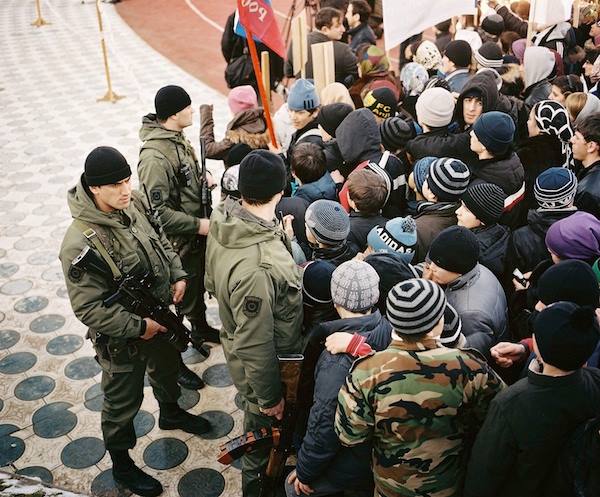 Since 2007, when the International Olympic Committee awarded Russia the honor of hosting the 2014 Winter Games, President Vladimir Putin has lavished the southern city of Sochi with the resources to turn it from a sleepy resort backwater into an international destination. Six years and fifty billion dollars later, it's clear that the Russian Government takes an exclusive view of that welcome.

It does not, for example, consider Arnold van Bruggen and Rob Hornstra -- two Dutch documentarians who have been working as long as the construction crews to complete their own colossal and moving documentary about the region in the run-up to the Games -- as members of the Olympic Family.

"The quote, which was a perfectly normal and neutral thing to say when making a bid, just gets more ironical every day," said van Bruggen, one day after his request for a visa to attend the Moscow opening of The Sochi Project was denied.

Van Bruggen and Hornstra's project, a crowd-funded masterpiece of slow-journalism, tells many stories. It tells the story of imperial pleasure palaces converted to proletariat sanatoriums during seventy years of Soviet power and of the more recent transformation of the sub-tropical summer capital into a "world-class" winter capital. It tells the stories of everyday residents -- karaoke singers, nightclub dancers, pensioners, veterans and resort workers -- and the disappearance of their homes under the construction of an Olympian Potemkin village. It tells the story of ecologists concerned about the environmental effects of Putin's vanity fair and of transvestites at Sochi's only gay club - none of whom can be expect a warm welcome from an authoritarian regime that jails whistleblowers and human rights activists and overly open homosexuals.

Most exceptionally, it also tells the story of life on the other side of the mountains from Sochi. This is a story of ethnic strife, disenfranchised minorities and families destroyed by ongoing conflict in the North Caucasus.

"The North Caucasus is an utterly ignored part of the world. You can't even get there from the Olympic Villages. There's no road," notes Hornstra, the photographer. "But there are so many reasons to examine it as all one part with Sochi and the Olympics."

That is what The Sochi Project: An Atlas of War and Tourism in the Caucasus does. In 300 pages of classic photographic portraiture and unaffected story-telling, it dwells on the human context of a troubled region that remains isolated, impoverished and ignored despite the sudden spotlight on the upcoming Olympics as an event worthy of censure, even boycott.

The book, the culmination of Hornstra and Van Bruggen's five-year-long, crowd-funded investigation of the region, draws from a series of thematic publications created as "gifts" to the project's donors. The larger multimedia project has a small but appreciative following of documentarians, Russophiles and Russophobes, activists and artists -- all of whom recognize the tremendous value of what van Bruggen humbly calls "an effort to raise awareness."

The project's exhibit at the Winzavod Center for Contemporary Art in Moscow is still scheduled for October 18, even if its creators, despite significant pressure from the Dutch government on the Russian Ministry of Foreign Affairs, may not be in attendance. In the smallest of concessions to the controversy, van Bruggen and Hornstra agreed to drop the provocative "War and Tourism" subhead from the project title. They also consented to push the banal quote from Putin about "feeling at home" away from the exhibit's entrance, where its political irony is less pointed. Still, there is no certainty that the gallery will not be pressured to cancel the opening.

What is certain is that in five month's time, the Olympic Family will descend on "Potanin's slope," "Gazprom's gonodola," and "Sberbank's ski lift" -- as the locals refer to the new Sochi landscape funded largely by state-controlled companies and wealthy pro-Putin oligarchs. They will likely feel very much at home in Sochi's luxurious new digs.

As for the migrant workers who built them and the families from Russia's most impoverished and war-torn regions who have been displaced once more -- they will have vanished from the public eye. Except in the portraits of The Sochi Project.