We live in a time when artists, curators and galleries are no longer expected or required to hew rigidly to a particular dogma and artistic ideology, to represent a camp and to draw battle lines in the heroic march of artistic progress. Though orthodoxies exist, and while pluralism in art is not anything like a new idea, it seems that this is one of those periods of art when, outside some passing fashions, it would be difficult to identify any dominant movement. There is a great deal of lively and generous work being made and shown today that crosses lines and exists in between historical polarities.

What follows is intended to pick out some examples of "in betweenness" from among the many current group shows. I do not regard these picks as remotely comprehensive of what is on even only view today. I have further narrowed my focus to artists who work in traditional, as opposed to new, media and who do not seem to be driven by the anxiety of staking out a radical position. 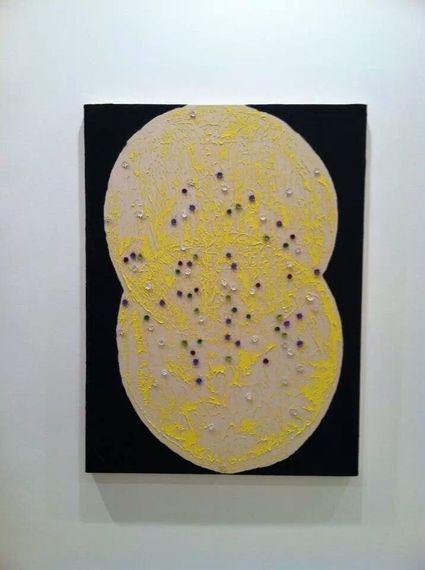 An exhibition that directly addresses the notion of crossing boundaries is Drifter, a meticulously curated show, at Hionas Gallery, and organized by the artist and writer David Rhodes. Edited from Rhodes' words:

The migration of shape, form, color and material from one long established category to another... is a feature of new painting and sculpture... Territory is informally taken or exchanged... Vernacular materials often combine with fugitive color, the works here are happy in their homelessness and independent in a newfound openness that avails itself of historical tropes as much as the... present tense.*

Dennis Hollingsworth and Martha Clippinger are among the less well known (so far) artists in the show. Hollingsworth, who has one of the oddest pieces in the show, "Enfolded, Hidden" (though not quite as strange as his hothouse paint-flowers on view recently at Sargent's Daughters). Surrounded by black, two intersecting circles contain a spread of yellow and buff paint shmear, like flattened out construction glue on the bottom of a linoleum tile. Sprinkled throughout and within the circles are little sculptural star-blobs of paint, looking like something squeezed from a pastry tube. The confluence of these few elements evokes a wildly incongruent list of associations, not necessarily in this order: a view of microbial activity underneath a microscope, weird colored bacteria in Petri dishes, like the ones my father brought home and left in the fridge when he was a biochemist; the star-blobs suggest plastic stick-a-burs in flattened yellow winter grass; a bird's eye view of cartoon explosions peppered across a field, or strange Martian flora, as might be seen on an old science fiction magazine cover. 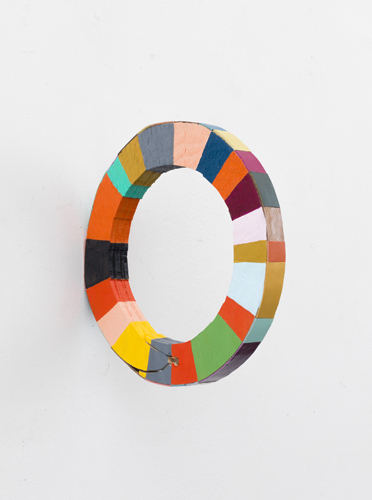 Martha Clippinger's work, too, has a playful quality that bridges painting and sculpture. Wonderwheel is a bit like a wooden uroboros segmented into mini geometric abstractions. Clippinger, in this piece, does not polish or hide her means, leaving visible the jigsaw mark that cuts into the doughnut hole at the heart of the circle. This kind of informality is at odds with the formal qualities of both the circle format and the Bauhaus-like blocks of color painted on its surface. The entire piece exists in a blissful gray zone, despite its chromatic sharpness; it can be read as a witty painting-sculpture jutting from the wall, as something mysteriously magical and totemic, and as something a child might have felt like doing, all together a difficult balance to maintain.

Another kind of "in between" is pictorial and subject-driven, and is central to the premise of Come Like Shadows -- Palimpsests, Traces, Specters of the Silver Screen, Nightlife, Veils, the Absent Present. Curated by David Cohen at Zurcher Studio, the press release describes the show as a, "Kind of visual essay that explores the notion of the trace in contemporary image making, interpreting the theme of shadows and specters in a variety of subjective, iconographical and phenomenological ways." 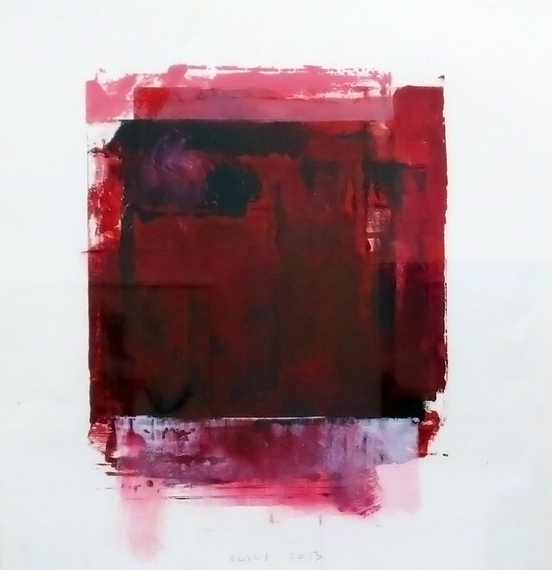 Stuart Shils is one of the few artists in this show that isn't figurative, and whose work initially appears to be abstract. Closer viewing reveals hints of dreamy and haunted rooms that imply historical and/or imminent activity. It is as if we are seeing the echo of an action or are caught in a flicker between scenes in a snipped film frame. These are "in between" moments, like a view of existence pressed between plates of slightly opaque glass. "After a Late Summer Meal in Rome" is a monotype (a print made off a painted plate), but has also been printed multiple times so that what we are seeing has the layered depth of a painting. Bits and pieces of earlier strikes peak out from under the inevitable inconsistencies, and holes in the top printed layers creating a densely veiled and mysterious outcome. 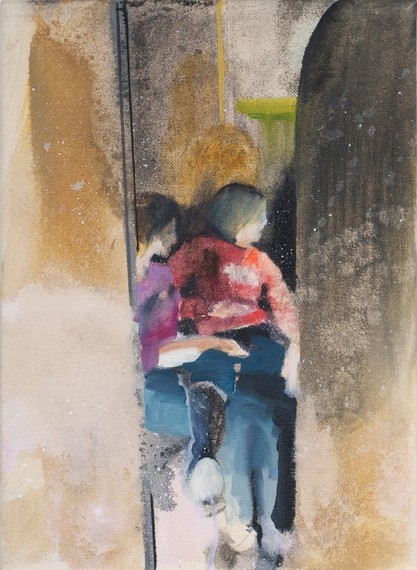 Kerstin Drechsel also makes paintings that obliquely suggest photography, in this instance the blared blurriness of a Polaroid. Her small canvases, all numbered with the title "If You Close the Door," provide glimpses into the nightlife of a lesbian club. In both their voyeuristic subject and splotchy and partial rendering they recall the monotypes that Degas made in brothels. The In Between of Drechsel's work has not so much to do with an artistic position, as it does with the world depicted in her paintings -- something not quite private, but also not quite public despite being on a gallery wall. The paintings convey a place that feels grimy and furtive; creepiness, however, is allayed by the tenderness of the painterly touch. 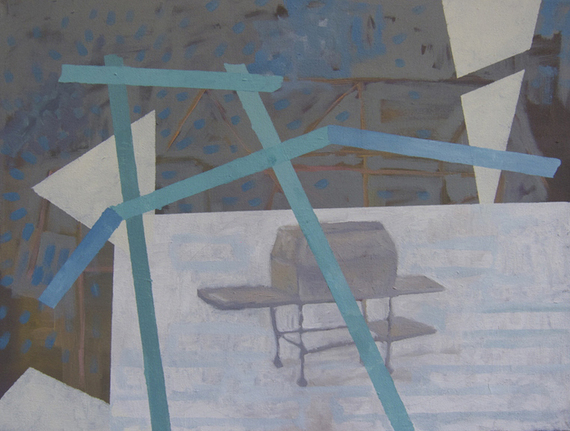 At Lesley Heller Gallery, at a show curated by Adam Simon called Clouds, a small piece by Sharon Butler stood out from among the 55 works on view. The piece, ostensibly a rooftop viewed from above, foregrounds three forest green stripes of tape-shape that both cancels, and creates a bridge to a subtle and delicately painted gas grill. How an object so inherently banal and middlebrow as the grill can appear so vulnerable is a surprise. The counter point between the use of painted-in tape mark against the soft, naturalistically-painted grill resonates with simple and poignant poetry. Further, Butler has chosen to bypass her signature (and in my opinion distracting and mannered) Casualist position of linen hanging loosely from its support, thus allowing the viewer to really see and feel the painting, for which I am grateful. 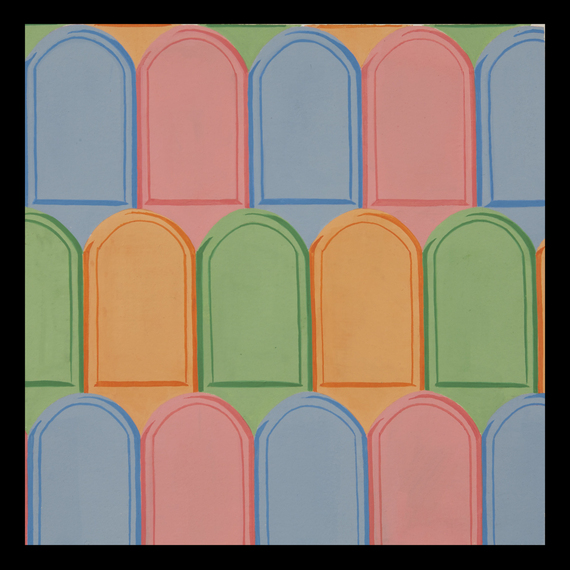 At Brian Morris, Geoffrey Young curated "It Hurts So Good to Be Loved So Bad," which I might have titled Funny/Not Funny, and like the other exhibits, thematically traverses the territory of "in betweenness" with work that, quoting the curatorial statement, "Is both light-hearted and thought provoking." The work on view is a weave of pattern, abstraction and comic-booky, illustrative visual language. Epitomizing this is Zoe Pettijohn-Schade's small gouache paintings, "Crowd 1," and "Crowd 2," which fuse patterning akin to retro wallpaper with imagery that looks like rows of sweet, candy-colored tombstones. "Crowd 2" is further overlaid with a myriad of shapes that look like graphic renderings of abstract origami. There is a sharp wit in calling forth associations of forms that imply the tragic, the playful and the decorative, as if being tricked into realizing through the visual seduction that yes, we too will die. 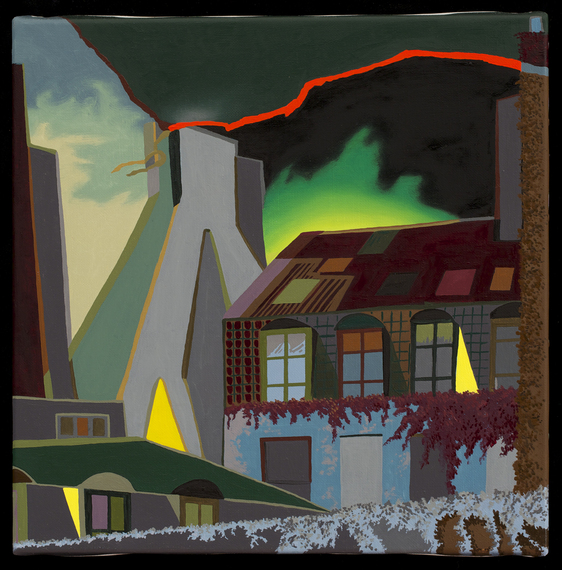 It occurs to me the that the idea of "in between" could be extended to the practice of moving, walking, criss-crossing between galleries (all on the Lower East Side in this instance). Returning to the title from the Hionas show, Drifter, I am reminded of some of the ideas put forth in Lewis Hyde's book, Trickster Makes the World. Hyde posits drifting as a key component of the highly creative Trickster archetype, along with standing at the crossroads, theft (ideas, images) and turning things inside out. I believe that as these are core to art making, it is only their extensive and widespread acceptance as a practice that is really new. Let us not get too comfortable with it, however, as the whole thing is, by nature, bound to move on, resisting containment.

*The full statement can be found here.

All images courtesy of the artist and gallery and used with permission.