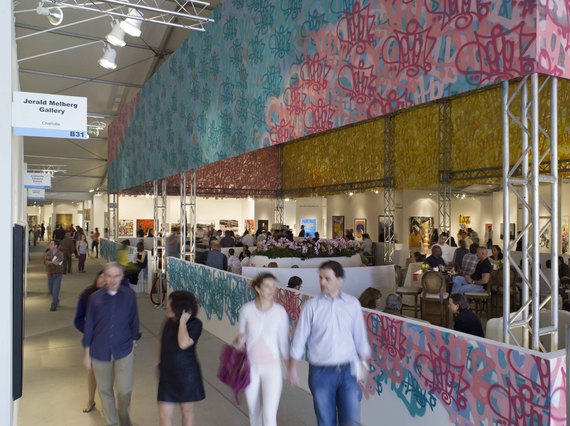 Street art, the crux of the international underground art movement, now has a place in the commercial market of the mainstream art world. According to Nick Korniloff, Miami's Wynwood Art District is where the movement is "red hot" and at the forefront.

Korniloff, director (and founder) of Art Wynwood, is set to launch the fair's third edition in the art-centric neighborhood, February 13 through 17. It's first edition in 2012; the fair integrates the street art movement with other mainstream contemporary and modern works, which Korniloff said are also at the forefront of the art market. This year, 70 international galleries are participating.

A VIP preview for Art Wynwood is Thursday, February 13, where artists will create three murals, sponsored by Goldman Properties, for the lounge area. Brooklyn-based muralist Maya Hayuk, who recently completed artwork on the Bowery/Houston Street Graffiti Mural Wall in New York City, will create one of the murals.

We wanted to create a fair that would benefit the gallery district in Wynwood, our international galleries, the collectors and visitors that call Miami home during the month of February," explained Korniloff, who is also director of Art Miami, which will enter its 25th edition in December. We also wanted to help street artists, looking for gallery representation, to have their own art fair that had amazing synergies to the neighborhood they helped create.

If you've ever participated in a Wynwood art walk on a second Saturday, visited the area during Art Week in December or even explored one day on your own, you've seen a neighborhood that harbors wall-to-wall creativity, literally -- Wynwood Walls is a great example.

Since the mid-2000s, artists played a role in transforming abandoned warehouses in the then edgy neighborhood, catching the attention of with the late Tony Goldman, an avid collector of street art and known for historical preservation through real estate development. His daughter, Jessica Goldman, continues to carry on her father's vision for Wynwood. Read more here.

The work of street artists can be commentary on everyday life, politics, social injustices or even humorous, to name a few topics. Depending upon the viewer, or property owner, it can be seen as vandalism, or amazing artistic expression. Currently, in the art market, it's viewed as the latter. And street art acquisition and sales have indeed become a multi-million dollar international business.

"When you look at the current movements of the market you have to acknowledge the popularity and pricing achieved by Banksy and the power of an artists like Shepard Fairey, who helped get President Obama elected with the creation of his HOPE poster for the campaign," Korniloff said.

He also explained the works, in every medium, of artists synonymous with the street art movement in New York City, such as the late Keith Haring and Jean-Michel Basquiat, is highly sought after and achieving record pricing during private acquisitions and auctions.

The same can be said of street art generated in other major cities around the world, including Los Angeles, Paris, London and Berlin. Many cities are taking note and incorporating artistic hubs into the urban landscape. One such city is Vienna, Austria.

A new component of Art Wynwood is a collaboration with Cash, Cans and Candy (CC&C), an international festival of street art from Vienna, presented by Ernst Hilger, owner and founder of Hilger Modern/Contemporary and Hilger BrotKunsthalle in Vienna. Katrin-Sophie Dworczak is the curator.

Dworczak explained the origins of CC&C:

I have been working on the project for the past three years. I had co-organized a street art festival in 2010 in Vienna and wanted to do it on a bigger scale. My boss Ernst Hilger believed in me and my idea and helped put it into action. I traveled a lot to meet most of the artists in person for the first Vienna edition - such as Faile in New York and Shepard Fairey in L.A. among many others. And, CC&C was officially 'born' on May 31, 2013.

Already familiar with the Miami art scene and currently working with local artists, when invited to join forces with Art Wynwood, Dworczak said it made perfect sense.

"We are happy to be part of Art Wynwood and that we were given this opportunity to present CC&C in a different context to show that it works everywhere," she added.