One of the classic thought exercises in quantum mechanics is Schrodinger's cat. The imaginary cat is sealed inside a lead-lined box along with a radioactively unstable atom, some poison, and a sensor that releases the poison and kills the cat if that atom decays. The decay of the atom is completely random and unpredictable. Thus, the cat is simultaneously alive and dead to the outside universe in terms of its quantum state.

Oddly enough, no one bothered to ask the cat whether it had joined the choir invisible.

This seems a perfect metaphor for defining sexuality as a transgender person. Labels, and orientation, are primarily based on the gender(s) and sex(s) of the people involved in an intimate relationship. Thus, depending on whoever is looking at me and my relationships, I can fall anywhere on the spectrum.

For example, my father, a strict Mormon, believes that you are whatever sex and gender you were assigned at birth. I married a woman, therefore I am straight.

Because having a simultaneously transgender and gay child would probably make his head explode.

Then there are other people who would take me at my word when I say I identify as female, and am attracted to women. Fine. That makes me a gay or lesbian right? But... then there's surgical status.

Can you be a lesbian with a penis? A gay man with a vagina? I would say yes, but many other (mostly non-transgender people) would say no.

Just to make it even more complicated, how do you label relationships between two transgender people? Does identity trump sex at birth? Does surgical status trump identity when assigning labels? If a man has been only with male identified individuals, but some of them are transgender, do they count as bi or gay? Do you get to keep your gold star gay (or straight) award if you've slept with a transgender person? 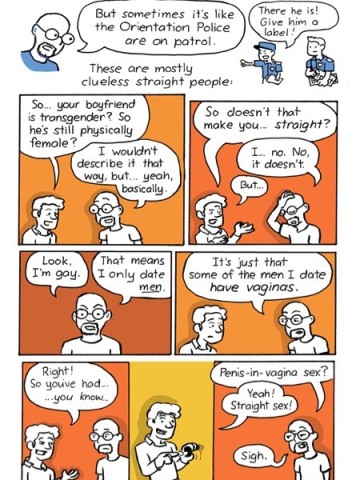 Saying that only you get to define your own orientation may seem like the simple way to solve this Gordian Knot. But, as we all know from the marriage debates, the opinions of others on our sexuality affect our daily lives. While the overwhelming consensus of the transgender community is that a person is whatever they identify as, others (including sometimes the government) base it on other things. The problem is it's done completely inconsistently.

In a marriage case from 10 years ago, one lawyer wrote about a transgender person's marriage rights:

Taking this situation to its logical conclusion, Mrs. Littleton, while in San Antonio, Tex., is a male and has a void marriage; as she travels to Houston, Tex., and enters federal property, she is female and a widow; upon traveling to Kentucky she is female and a widow; but, upon entering Ohio, she is once again male and prohibited from marriage; entering Connecticut, she is again female and may marry; if her travel takes her north to Vermont, she is male and may marry a female; if instead she travels south to New Jersey, she may marry a male."

If being gay means being a second class citizen in the United States, transgender is at least one class below that. Right now, I am female in Ohio for the purposes of a driver's license, male for the purposes of a birth certificate. The DoD will not change my gender markers to female because they don't feel like dedicating the legal resources required to figure out if transgender nuptials performed in states without marriage equality are valid. The Pentagon took one look at our transgender lead box and said, "Hell no, we're not going there. That's a big bowl of nope."

However, other parts of the federal government see just the opposite. The Department of State, Veteran's Administration, and Social Security Administration will now recognize me as female and in a same sex marriage. My employer records me as female, but until this year my insurance company had me as a male so that my marriage would be "straight" for the purposes of partner benefits.

In a world that requires gender for labels, I have torn mine up, doused them in gasoline, lit a match, and feverishly danced around the resulting bonfire like its Burning Man. All the while, it feels like the world has watched aghast because they just don't know what to say; the English language just doesn't have the words express what they're seeing. I am many shades and none simultaneously, each completely defined by the observer.

I am Schrödinger's trans.

We want to know what you think. Join the discussion by posting a comment below or tweeting #TEDWeekends. Interested in blogging for a future edition of TED Weekends? Email us at tedweekends@huffingtonpost.com.