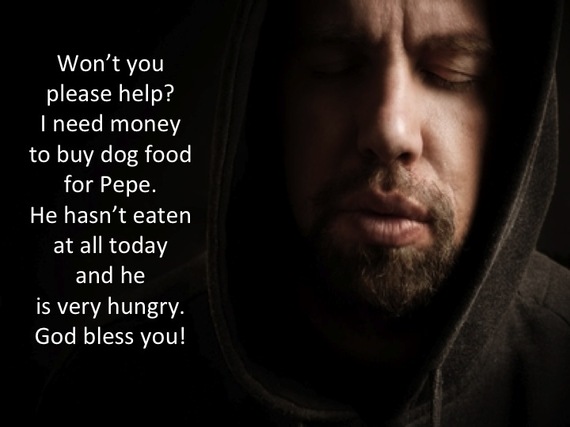 I have never been fired from a job. Except once -- a week after the man I wrote 350 speeches for in two years, Donald J. Manes, the Borough President of Queens, committed suicide in his kitchen because he knew he was just about to get busted for stealing more than one million dollars from the City of New York in what is now affectionately known as the Parking Violations Bureau scandal.

I wasn't fired because I had done anything wrong. I hadn't. I was fired because the successor to the Not-So-Honorable Donald J. Manes wanted to clean house in a "B" movie politically correct way to appease the irate public's need for reform. A new leaf. She was turning over a new leaf and a whole bunch of other metaphors being supplied to her by a newly hired PR advisor.

The bottom line? At 37, I was out of a job -- unemployed -- with an insanely exorbitant Upper West Side rent due in less than a month.

Having saved almost nothing from my speech writing gig and with absolutely no desire to write for yet another person with delusions of grandeur, I decided to go the artistic route and earn my living the honest way -- playing my clarinet in the subway.

So I did what any, self-respecting, former English Lit major with a little known ability to recite Canterbury Tales in Middle English would do. I wrote. Not a screenplay. Not a suicide note. But a query letter to New York Magazine pitching an investigative journalism article on the beggars of Manhattan -- the real story, I declared, behind the people who panhandled for a living.

And so, for the next 30 days, that's exactly what I did -- walked the streets of the Big Apple, doing my underground reporter best to befriend the people most of us think aren't really beggars at all but con artists trying to fool us for a living, bad actors impersonating beggars so they can buy cheap wine and avoid the rush hour commute.

Thirty days I spent with them. Thirty days walking, talking, buying them lunch and trying to discover the organizing principal around which my story would authentically take shape.

And I did. Find it, that is. The moment I met Fred.

His spot? 79th and Columbus, just one block from my apartment. His schtick? Pepe, his dog. Or more accurately, his sign for Pepe, his dog -- a portable cardboard sign painstakingly printed with a pen he found three weeks ago that let the world know he wasn't begging for himself, but for his faithful companion, a 10-year old mutt he found on the street and loved too much not to feed every day.

Standing there before this man, tape recorder tucked under my right arm, I couldn't help but smile. This was either the cleverest of panhandler scams or Fred was an uptown saint.

I looked at him and he looked at me. Then, with a crook of his head and a word I didn't understand, he signaled me to sit with him and Pepe on a blanket that had seen, shall we say, better days.

He told me his name, but not much else. We sat there, in silence, side by side, Pepe before us, as hundreds of people walked by, most casting glances, not coins.

Thirty minutes passed, then Fred, with a pained look in his eye, looked at me and asked if I would "mind his dog" while he went looking for a hotel or restaurant to relieve himself.

And so, for the next hour, I sat there on the blanket with Pepe, the sign and a tin cup.

This being 79th and Columbus, many purposeful, well-dressed people walked by. All of them, of course, assumed I was the beggar.

"NO!" I wanted to scream. "You got it all wrong! I'm not a beggar. I'm a writer doing a story on beggars". But I couldn't find the words. Somehow, the dog and cat both had my tongue. I was speechless.

When Fred finally returned, he had a large wet spot on his pants.

"Dude, what happened?" I asked.

Mitch Ditkoff is the President of Idea Champions, an innovation consultancy based in Woodstock, NY. This story is excerpted from his forthcoming book: WISDOM AT WORK: How Moments of Truth on the Job Reveal the Real Business of Life. Want to publish it? Leave a comment below.