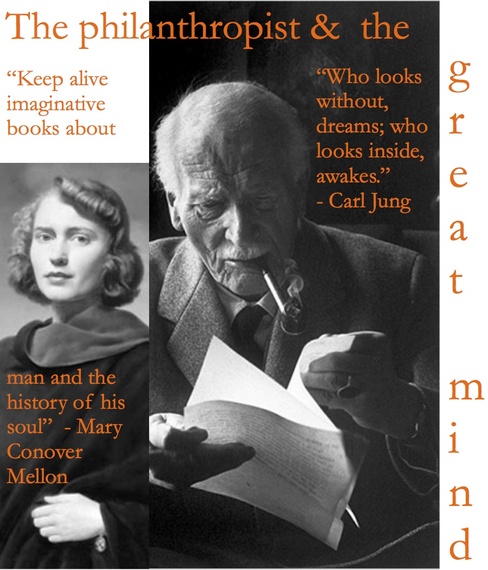 Mary Conover Mellon was only 33 when she first heard a speech by Dr. Carl Jung, a pioneer in psychology and one of the great thinkers of the 20th century.

Her response at the time revealed not only her humility but also her courage to let intuition inspire her giving.

"Though I don't know what he means, this has something very much to do with me."

At that moment, she began to consider a new philanthropic direction - one that would result in the creation of the Bollingen Foundation (named after Jung's home in Switzerland) and the publication of Jung's collected works in English.

Of course, it helped that her husband was Paul Mellon, son and heir to the fortune amassed by Andrew Mellon, industrialist, investor and Secretary of the Treasury in three different administrations.

But if the money came from Paul, a man who was already a remarkable philanthropist in his own right (the National Gallery of Art in Washington owes its founding and much of its growth to the Mellon family), the leadership for Bollingen came from Mary.

Paul called her the "founding nurturer."

As chronicled in William McGuire's book Bollingen: An Adventure in Collecting the Past, she negotiated the project with Jung directly - as World War II shook the very roots of all assumptions about decency, democracy and the staying power of benevolent imagination.

"The world is such a mess that it becomes all the more important to me to do what I can to keep alive and make available such works as yours, and those of others who can contribute real, scholarly and imaginative books about man, and the history of his soul."

The foundation created the Bollingen Series of books, which now has more than 250 titles, including the 20 volumes of Jung's collected works and Joseph Campbell's The Hero with a Thousand Faces.*

The philanthropy not only supported leading scholarship, it created culture:

"Never before in the history of publishing has there been an author list as distinguished as that of Bollingen, nor has a publishing program had a more telling impact on the thought of its time." -- Jean Martin, Wilson Library Bulletin

Before the foundation was wound up in 1968, it also granted 300 fellowships providing funding to poets like Marianne Moore and artists like Isamu Noguchi.

Mary Mellon was the editor of the series until her death at the age of 42, following an asthma attack in 1946.

"What one senses in Mary Mellon's ambitions for Bollingen is the overwhelming importance of Jungian ideas and the international intellectual network that centered on Jung," wrote Professor Thomas Bender in a New York Times book review. "Without her determination and energy - and her husband's fortune - it would not have happened."**

Which brings me to the theme of this post:

The "best" philanthropy, many donors say, comes from objective analysis, theories of change, rigorous research and strategic planning. They believe success is proven with measurement and numbers. No doubt, these are all valuable tools. But they will never replace the qualities Mary Conover Mellon brought to her philanthropy - intuition, heart and personal commitment.

Earlier this year, John Kania, of FSG, shared with me the wisdom of William O'Brien, past president of Hanover Insurance Companies:

I believe we separate our interior and exterior philanthropy at the risk of diminishing the potency of our giving. Can there be a more empowering "intervention" than to act on the passion, compassion and truth we know deep within? Giving is so wonderful, in part, because it can connect us with this deeper self.

Philanthropists often seek to transform the outside world, but they miss a big opportunity if they ignore this fundamental truth: that giving can change the giver as much or more than the recipients. This is a story often overlooked in philanthropy's quest for measurable impact. And I'm grateful to be able to tell Mary and Paul's story here as a way to honor their kind of inside-out philanthropy.

But the last word is best reserved for the man who inspired the philanthropy in the first place. His seminal work in analytic psychology always pointed to the transformational power to be found within.

In 1916, he wrote the following to his patient, Fanny Bowditch:

It is understandable that, as long as you look at other people and project your psychology into them, you can never reach harmony with yourself...

Your vision will become clear only when you can look into your own heart.

Without, everything seems discordant; only within does it coalesce into unity. Who looks outside dreams; who looks inside awakes.

* The series is now under the direction of Princeton University Press. In recent years, more of Jung's work has surfaced and been published, including The Red Book in 2009. The Philemon Foundation works to further the original goal of the Bollingen Foundation in publishing these hitherto unpublished works.

** In fact, the Bollingen experience inspired further philanthropy by Paul Mellon: "The Yale Center for British Art holds one of the world's greatest collections of the work of William Blake thanks to the enthusiasm of its founder, Paul Mellon, for Blake's art and ideas. .. It was the interest of his first wife, Mary Conover Mellon, whom he married in 1935, in the thought and methods of Carl Jung that helped transform Paul Mellon into a major collector of Blake's work."