Kazakhstan can offer a much more visible contribution to international peace and prosperity. This country needs to be called upon to play a stronger and more active role in the mediation of interests between the United States (U.S.) and the European Union (E.U.), on one side, and Russia and the Middle East, on the other. Kazakhstan's recent mediation in the Ukraine crisis and Iranian nuclear talks should not be viewed as an exception, but rather as signs of the more significant role this country can play in the world arena.

It is in Kazakhstan's interest to reduce security threats in the region, advance economic interests and elevate its international profile in world affairs. It is striking that every time the U.S. and/or the E.U. look for a "compatible" interlocutor to mediate international affairs with the Middle East, Turkey is still invariably viewed as the only viable option. This, even after almost a quarter of a century since the collapse of the Soviet Union in 1991 and the formation of five new independent states so strategically located in Central Asia (see map). And to mediate international affairs with Russia?! There are absolutely no options! From a geo-strategic standpoint this poorly diversified portfolio of strategic relationships poses several limitations to "the west" and to the world in general. Haven't we learned from the most basic financial management principles that a diversified portfolio of investments is highly recommended? 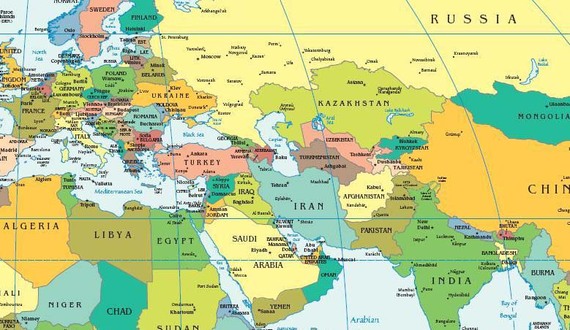 Basic principles of economic geography should have sparked the imagination of western leaders in 1991 about the role a country located between Russia, the Middle East and China could play in world affairs. But because of the narrow-minded mainstream way of looking at international relations from a predominantly competitive perspective, countries or regions that cease to be viewed as threats become less relevant; this was the case with the former-soviet countries after the fall of the Berlin Wall. As a result, opportunities for international cooperation and reciprocity get lost! This occurs because international relations have, tragically, been driven by fear and mitigation of threats and not by trust-building aspirations.

Kazakhstan is one of these five new countries formed in 1991. And as Frederick Starr from Johns Hopkins University points out, "somewhere in the DNA of the peoples of Central Asia is the capacity to become a link and bridge between civilizations." Once the region of philosophers, scientists, poets, travellers, polyglots and entrepreneurs, Central Asia and its potential role in world affairs, as it played until the Mongol invasion in the 13th century, have been largely neglected by western political leaders. But even if political leaders do not know or value history much, a simple look at a map should have conjured up the genetic vocation Starr mentions: location-location-location.

This generalized myopia in international relations and geo-politics results in a mainstream perception about Kazakhstan that is for the most part misconstrued or wrong. Perceptions of inaccessibility, periphery, desertification and suspicious soviet heritage, among others, have been keeping this country in the background of the international arena.

For starters, the close relationship with Russia should be viewed as perfectly natural, and obvious, regardless of pre-1991 ties. They are neighbors! But in fact, from a bilateral trade stand point Russia is not even Kazakhstan's most important partner. Kazakhstan's total trade volume (gross imports + exports) with China in 2012 was $24.01B against the $23.56B with Russia. In terms of Kazakh exports, Russia (9.02%) is as relevant as Italy (8.69%) and the Netherlands (7.39%). The U.S. only accounted for 1.07% of Kazakh exports.

With a market share of 36%, Russia is the largest exporter to Kazakhstan (twice the size of Chinese exports). However, (i) this Russian advantage is based on a very narrow set of mineral products related to the energy sector - crude, refined petroleum and Ore alone accounted in 2013 for one quarter of Russian exports to Kazakhstan; (ii) and the weight of total imports from Russia have been decreasing (43% in 2011, 38% in 2012 and 36% in 2013). Moreover, several energy corridors being developed, such as the Southern Gas Corridor - a European Commission initiative for the gas supply from the Caspian and Middle Eastern regions - may reduce Kazakhstan's energy dependence on Russia. I do not intend to downgrade the power of Russia in the region but instead to reject the argument that Kazakhstan is too intimate with Russia to play a neutral role in mediations. To the point, the Russian ethnical group in Kazakhstan decreased from 37.4% in 1989 to 23.7% in 2009. In the same period the Kazakh ethnical group grew from 39.7% to 63.1%.

Concerns about potential for neutrality, namely for mediation between the west and the Middle East, should be more acute regarding Turkey. While in Kazakhstan Islam is the religion of about 70% of the population, in Turkey the Islamic population is about 96%-99%. It seems pretty intuitive that this Central Asian country should have been viewed long ago as a great alternative to Turkey - not a substitute - in terms of international mediation, in particular between the west and the Middle East.

If the international community is also concerned with de facto levels of corruption in Kazakhstan, and if this is viewed as a major barrier for cooperation, it should also realize that the higher the international integration of a country the lower its level of corruption is likely to be. As in any relationship, trust-building requires time, information networks and effective communication channels. Last month, as a very strong sign of his anti-corruption commitment, President Nursultan Nazarbayev laid out his new Anti-Corruption Strategy. And the international community is giving signs of some reciprocation actually. Kazakhstan is about to become a member of the World Trade Organization and Brussels created the Eurasian Council on Foreign Affairs (ECFA) "to facilitate the exchange of knowledge and best practices, as well as strengthen the links between Central Asia and the European Union".

Conveniently, "International Integration" is in fact one of seven strategic development areas contemplated in "Kazakhstan 2050 Strategy". Dialogue around green technology transfers could very well become a regular theme of communication with the west. In fact, President Nazarbayev, has repeatedly called for a global mechanism for technology transfer to improve energy efficiency and conservation. In a time when climate change is more likely than not the biggest challenge humankind will have to face within the next fifty years, the U.S. and E.U. should look at Kazakhstan's 2050 Green Economy framework as a very timely entry point to engage in a much more comprehensive and strategic way, and bring Kazakhstan to the center of world affairs. The Green Bridge Partnership proposed by Kazakhstan in 2012 offers a very specific institutional framework to enhance the international potential and legitimate aspirations of Kazakhstan. For that to happen, and in its own interest, the west needs to reach out to Kazakhstan much more convincingly. The current 30-second CNN ad inviting us to "Invest in Kazakhstan", though illustrative of Kazakhstan's commitment to engage, will not be enough if the west does not reciprocate further. Ernst and Young's Kazakhstan Attractiveness Survey released in May supports my argument. First, Kazakhstan is viewed as a stable destination for investors. Second, in this survey two hundred global business leaders included sustainable development and life sciences in the high-growth fields of the future.

As stated in "Kazakhstan 2050 Strategy", this country's most critical development challenges, such as air pollution, renewable energy sources, energy efficiency, sustainable water management, waste management and extractive industries offer more specific entry points for establishing multilateral investment mechanisms and further engaging western governments, business and industries. Not surprisingly, these national priorities relate to several of the world's post-2015 Sustainable Development Goals, which further reinforces how timely the call is for a stronger alliance around a "green roadmap". Moreover, domestically, Kazakh leaders need to take into consideration that in spite of having the 45th world largest GDP, and being expected to grow above 7% in 2014 and 2015, there are other wellbeing-related factors that need to be addressed urgently: the country ranks 119th in the Happy Planet Index. The long-term focus should be on developing mutual trust between the west and Kazakhstan and to foster this country's role as a viable ongoing partner and mediator, thus offering a much more visible contribution to international peace and prosperity.

The author of this post is the founder and director of several programs at Columbia University, including the Kazakhstan Sustainable Development Visiting Scholar Program funded by the Kazakh government.