When I began living in the plains of Nepal in 1987, villagers visited almost daily to ask for advice on health problems. I was studying to be a doctor but not in medicine. I was working toward my PhD in cultural anthropology at Stanford University.

I was also an American married into a high-caste Brahman family. Villagers often sought guidance on spiritual matters from my father-in- law, a Hindu priest. Women looked to my mother-in-law, Parvati, for advice on issues ranging from marriage to domestic violence. So, my family's respected social role in the community may have been just as--if not more--important than my American status and educational aspirations.

I had a copy David Werner's, Where There is No Doctor, and did my best to help, all the while reminding people that I had no medical training. I urged them to visit the local health post for serious problems. But my in-laws told me most probably wouldn't, especially if they were poor or low caste. 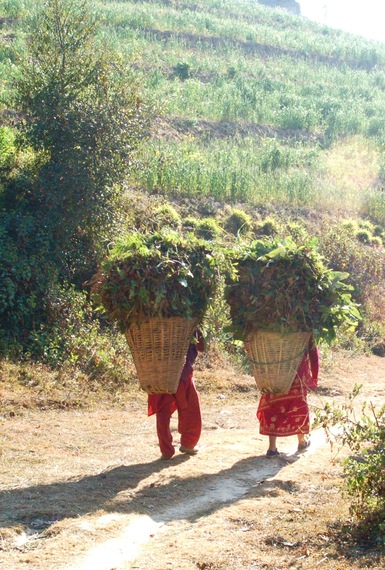 I found our local health post staff to be compassionate and skilled. But many poor and low caste villagers feared all health professionals and medical institutions. It wasn't, as foreigners might imagine, because people harbored a cultural mistrust of Western medicine. Anthropologists have found that Nepali communities often mix allopathic, Ayurvedic, and shamanistic approaches. From what I gathered, poor and low caste villagers disliked encounters with the health care system for the same reasons many of us do anywhere in the world. They'd had their concerns dismissed, been sold expensive medicines or exams with dubious benefits, been chastised, misdiagnosed, misunderstood, inconvenienced, lost work time waiting for all-too-brief exams, been looked down on for their skin color, ethnic status, poverty, and/or gender.

I began to understand why neighbors saw me as a logical place to start in an eclectic array of local health care options. I offered advice for free and tried to be kind. I often saved people money by recommending against expensive, sugary vitamin tonics doctors had prescribed. And visits gave people an excuse to figure out who I was, talk, look at photos.

Still, I felt unsettled by my medical role, partly because I was as puzzled by my own body as advice-seekers often were about theirs. I was four months into an unplanned pregnancy when I moved in with my husband's family. I had only recently recovered from extreme morning sickness and weight loss. I felt uncomfortable throughout pregnancy and fretted over where to give birth. Patronizing, dismissive doctors I'd met in the US, especially when asking for advice on reproductive health problems or birth control, made me reluctant to trust doctors in India and Nepal, especially when they told me I'd have to give birth flat on my back with my feet in stirrups and without my husband present.

I was a youthful idealist who leaned toward the natural. My sisters-in-law and neighbors had given birth at home. I figured it would be easy enough, so I decided to work with a nurse-midwife and try to have my baby in the room my husband and I shared in a loft over the buffalo shed. For complicated reasons, my labor went on too long, so I ended up delivering in a district headquarters hospital--45 minutes away from our home over rutted roads. I gave birth to a borderline underweight, but healthy, boy and slowly recovered from the ordeal and from undiagnosed postpartum depression.

After I became a mother, more and more women came to me with ailments they didn't want to talk about with anyone else: odd aches and pains "down below," things sliding around inside, itchy crotch, smelly secretions, painful urination, unbearable cramps, too much or too little blood in menstruation. I offered soap and water for foot fungus during rice planting season, cleaned out infected fingers, bandaged cuts and burns, advised people to take full courses of antibiotics, and urged nourishing food for mothers who had just delivered. I only recommended what would do no harm. But I learned what most women health-seekers everywhere do: even in better funded health systems, ailments specific to women are often under-researched and poorly understood. Many health problems that women in our village in Nepal described to me were beyond the scope of a single book, even one as thoughtful and practical as Where There is No Doctor. It became impossible for me as a layperson to offer any intelligent advice beyond, "go see a doctor."

I've written about my experience of giving birth in Nepal in greater detail in While the Gods Were Sleeping: A Journey Through Love and Rebellion in Nepal. The book also documents efforts women in our village made to expand their rights in the late 80s and early 90s, before Nepal's civil war. One of the most outspoken activists was Parvati, who advocated for unwed mothers, women who were beaten, low caste women.

My own frustrations in dealing with health care in Nepal, my traumatic birth experience and the women who came to me whom I couldn't help have inspired me to look for some small way to contribute toward better alternatives for women there. I have no desire to start my own organization. One of the lessons I learned from working alongside activists like Parvati is that women throughout Nepal have long been tackling gender inequality. They are passionate, creative, tenacious. And they have already made great strides in many areas: improving women's inheritance and divorce rights, increasing penalties for rape. The best way to get involved is to support their work.

The choice was easy. With the recent publication of While the Gods Were Sleeping, I am thrilled to be able to donate some proceeds to RHEST for projects dedicated to improving women's reproductive health in Nepal. And supporting RHEST challenges me to learn more about the connections between women's reproductive and sexual health and women's rights--not just in Nepal, but also in the United States and worldwide. The health problems women face may vary from one country to another, but they are everywhere linked to gender discrimination and other social inequalities.