On Sunday night, either the Seahawks or Patriots will walk out of University of Phoenix Stadium as winners of Super Bowl XLIX. Leading up to the big game, though, the biggest winners of Super Bowl weekend are the fans attending the wide variety of events hosted by NFL partners and other corporations across Phoenix.

Leading the way in terms of glitz of glamour this Super Bowl weekend are the lavish parties being thrown across town. From the Moves Magazine soiree Wednesday night, featuring a performance by the Ting Tings, to ESPN's Friday night event, which brought together partygoers in a 117,000 square foot space transformed into a mid-century modern home, those in town for the Super Bowl have a wide assortment of pickings for nighttime fun.

The main event on Thursday night was the EA Sports Madden Bowl. The party featured an EA Sports Madden NFL tournament pitting NFL stars including, Colin Kaepernick, Patrick Peterson, LeSean McCoy and Alfred Morris, against each other to see who has the best video game prowess. Afterward, guests were treated to a loud and energetic concert lasting well into the early morning and featuring performances by Lil' Jon, Florida Georgia Line and Nelly. 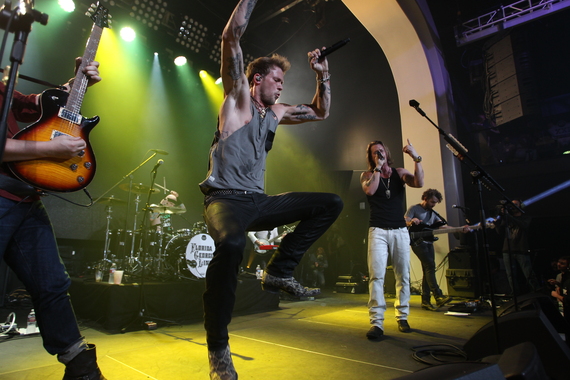 Friday night's event at the Bud Light House of Whatever brought together over 1,000 partygoers in a 70,00 square foot venue decorated with 13 truckloads of sand, a yacht, a giant blue gorilla and 3,000 cubic feet of inflatables. Inside of the venue, guests sipped on Budweiser products, ate food served from the nine different food trucks on site and were treated to a surprise performance by Nicki Minaj at midnight.

The weekend's parties will end with arguably the hardest ticket to get a hold of throughout the weekend: DIRECTV's Super Saturday Night. Featuring a performance by Rihanna, the event will bring together a high-powered guest list, ranging from Snoop Dogg and Drew Brees to Johnny Manziel and Tom Arnold, to see what other surprises at the party await.

While the night owls have wide pickings for entertainment this Super Bowl weekend, there is plenty to partake in during the day in Phoenix. Across the city, corporations and NFL partners are working to engage fans with their brands in fun, unique ways.

Tostitos, who partnered with the NFL for the first time this year, is hosting the Tostitos Party Blvd. Spanning several city blocks in downtown Phoenix, the Tostitos Party Blvd. features snack giveaways paired with larger-than-life party games, including a gigantic corn hole game and a dunk tank that takes participants at least one story up in the air to drop them into Tostitos dip canisters filled with foam.

For Tostitos, hosting the Party Blvd. is all about engaging one-on-one with NFL fans. "This is our first year activating Tostitos with the NFL. We've always done college football, so we wanted to make a big mark as far as this change in becoming an NFL sponsor. Our consumer target is the Millennial consumer. What makes Millennial consumers different from Generation X and Baby Boomer consumers is that MIllennials are looking for an experience that is interactive and engaging. They aren't looking for a passive, one-way conversation with a brand. Thus, a lot of what you'll see us doing is about us having a conversation and engaging with them," said Frito-Lay North America's chief marketing officer, Ram Krishnan. 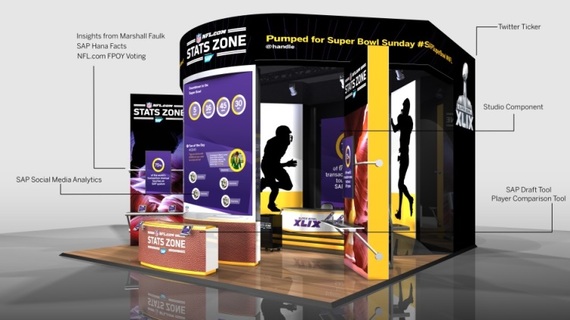 For SAP, the creation of the Stats Zone was all about reaching fans and addressing their interests. "If you look at how we have to differentiate our solutions from someone else, we have to find ways to showcase how technology is changing the way we live, work and play. This is the most phenomenal way to reach people at their passion points. We worked with the NFL to figure out how our technology can play a role in what they're trying to do to bring fans closer to the game. The NFL identified fantasy football as an area through which we could do that. The NFL isn't a market leader in this area--others, like Yahoo! and CBSSports are winning that battle. Yet, the NFL has exclusive content that nobody else does, and so we worked with them to build a player comparison tool, which is one thing that fans will be able to access and learn about in the Stats Zone," SAP's vice president of global sponsorships, Chris Burton, said.

Similarly to Tostitos and SAP, StubHub worked to create an interactive event at the Super Bowl for its customers to engage in. To do this, StubHub rented a 50,000 square foot facility across from the University of Phoenix Stadium to host a free tailgate party on Sunday for those fans who purchased their Super Bowl tickets on StubHub. The event will feature games and activities, ranging from a zip line to a video booth where fans can act out their own touchdown dance. Attendees will also be able to interact with current and former NFL players, while enjoying food and beverages before heading into the game.

"The first time StubHub sold tickets for the Super Bowl was in 2009 when the game was held in Tampa. We asked people to pick up their tickets in person. The problem, though, because of where the stadium was located is that they would come pick up their tickets hours before the game and then have nothing to do. This event came about by us saying, 'Why don't we give them a place to hang out?,'" StubHub's global head of communications, Glenn Lehrman, explained.

For the corporations that have gone to all ends to make sure their customers and NFL fans could engage with their brands during the Super Bowl, the feedback has largely been positive. Riley Smith, who actually won his way to the Super Bowl through Bud Light and was featured in one of its ads leading up to the event as a human version of Pacman, talked about how the lengths corporations are willing to go at the Super Bowl benefits fans. "This weekend is going to be crazy. I've never have been to Phoenix. I've never been to a Super Bowl. Now, I'm here. Bud Light is making my dreams come true right now," he said.