"Did you ever expect your book to cause so much controversy?" is the question I am most frequently asked when the discovery is made: I am the author of the famous/infamous children's book,Heather Has Two Mommies. 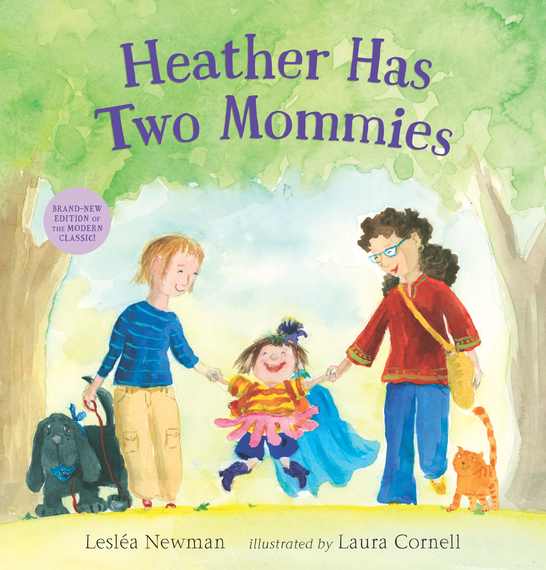 The truth is, I had no idea that the book would garner so much attention. The year was 1988. I was a fledgling writer with a poetry collection, a book of short stories, and a novel out, all published by tiny presses unable to pay me an advance. And so I turned my attention to another literary form--children's picture books.

It wasn't my idea. An acquaintance named Amy stopped me on the street one day and said, "Lynn and I don't have a book to read to our daughter that shows a family like ours. Someone should write one."

Well, I'm someone, I thought, as she walked away. And what the heck? A writing assignment is a writing assignment, no matter where it comes from. And besides, how hard could it be? Picture books don't even have that many words.

I should have known better. After all, I am a poet, and have spent years working on a single haiku. Or as Mark Twain supposedly said to an editor, "Need 100 pages? Give me 3 days. Need 3 pages? Give me 100 days."

It did not take me 100 days to write Heather Has Two Mommies. I did, however, read more than 100 picture books in preparation for the task. I took myself to the public library's children room, sat on a little chair with my knees bumping a little table, and read and read and read. I reacquainted myself with childhood favorites such as The Cat in the Hat, and discovered new books including If You Give a Mouse a Cookie. Then I went home to write.

The premise of Heather Has Two Mommies is simple: Heather's favorite number is two. She has two hands, two feet, two eyes, two ears, two pets, and two mommies. When a schoolmate asks "What does your daddy do?" Heather's teacher has all the children draw pictures of their families and tells them, "The most important thing about a family is that all the people in it love each other."

Who would think such a simple statement would be taken as controversial?

Ah, I was so naïve. Heather stirred up so much outrage, it was the ninth most challenged book of the 1990's, according to the Intellectual Freedom Committee of the American Library Association. Heather made headlines in 1992 when it became part of the Rainbow Curriculum, a resource to help New York City public school teachers make their lessons more diverse, and its inclusion cost Chancellor of Education Joseph Fernandez his job. In Wichita Falls, Texas, citizens circulated a petition to create an "adults only" checkout section at the public library solely for Heather Has Two Mommies and its companion book, Daddy's Roommate. When Senator Bob Smith tried to pass an amendment that would ban federal aid being given to any school that ran programs supporting "homosexuality as a positive lifestyle alternative," he read an excerpt of Heather aloud as part of his argument, and as far as I know, it is the only children's book text that is part of the Congressional Record.

Did I expect any of this? Absolutely not. I never expected my book to be mentioned on The Will and Grace Show, The Gilmore Girls, The Daily Show, or Real Time with Bill Maher. I never expected to open The New Yorker and see a full page spoof drawn by Roz Chast that featured eight book covers including "Sarah has two mommies who are Barry Manilow fans." I never expected Conan O'Brien to come up with a brand new cookie called "Heather Has Two Mallomars" in response to Indiana Republican Bob Morris' refusal to sign a resolution celebrating the Girl Scouts' 100th anniversary because the organization had become "too radical."

No, I never expected any of this.

Sadly, Heather went out of print several years ago. Happily, she is back with a stream-lined text and brand new full-color illustrations. What's in store for Heather in the year 2015? I'd like to think she'll have an easier time of it. After all the world has changed so much in the past twenty-five years. Twenty-five years ago, no one was talking about gay marriage. Today the marriage equality movement has celebrated successes in 37 states and the District of Columbia. Today we have a president who mentions Stonewall in the same breath as Selma. Today we have a new generation who either grew up in a two-mom family or lives next door to a two-dad family, or has a classmate lucky enough to have three grandmothers. The world has changed. Time marches on (as does Heather in her new purple cowgirl boots). Hopefully this time around, Heather will not cause a fuss. Instead, she will simply take her place as part of the diverse world she lives in where all types of families are accepted, celebrated, and loved.

Author and LGBTQ activist; books include Heather Has Two Mommies and October Mourning; A Song for Matthew Shepard