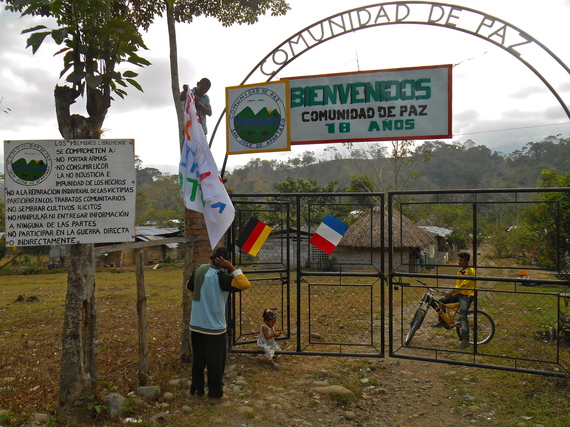 We are now more than two years into the Colombian peace talks. Meeting in Havana, negotiators for the Colombian government and its principal antagonist, the Revolutionary Armed Forces of Colombia (FARC), have been trying to agree upon an intricate deal to end the country's long-running armed conflict. Meanwhile, as the talks proceed, some communities have attempted to diminish the violence by maintaining an active and credible distance from all major parties of the conflict. The Peace Community of San José de Apartadó (PC) in the northwestern department of Antioquia is one of those communities.

Created by peasant farmers in 1997, the Peace Community seeks to avoid being drawn further into the country's armed conflict by peacefully resisting the occupation of its lands by both government-supported and oppositional armed actors. From the beginning, PC members refused to participate in a government security program being promoted known as CONVIVIR, which, among other things, used civilians as informants against guerrilla forces. Participation in this program would have undermined the group's neutrality -- one of its founding principles --and put it at even greater risk of violence.

After a massacre that took the lives of seven Peace Community members in 2005, which then president - and former governor of Antioquia - Álvaro Uribe blamed on the FARC guerrillas, he publicly accused PC leaders of "being in the services of the FARC and of wanting to use the Community to protect this terrorist organization." However, Colombia's Attorney General later determined that the massacre was carried out by the paramilitary group United Self-Defense Forces of Colombia (AUC) in coordination with the Colombian National Army's 17th Brigade. State entities and public forces have been linked to acts of violence against Colombian communities for years. Uribe himself has been accused of ties to paramilitary groups throughout his political career. An official investigation was opened against him in 2013, but in March of 2014 he was elected to the Colombian Senate, where he remains a powerful political force -- an opponent of the Santos administration and the current round of peace talks.

Almost since its inception, the Peace Community has been covered by protective measures of the Inter-American Court of Human Rights (IACHR), a body of the Organization of American States (OAS). These measures require that the Colombian state respect and protect the Peace Community, as well as investigate the crimes perpetrated against its members. The OAS system, however, does not have the power of enforcement, relying on international political pressure as its tool for the implementation of rulings. The Colombian Constitutional Court (CCC) upheld the IACHR's measures in 2003 and 2007. Additional national directives prohibit Colombian public forces and government officials from stigmatizing or defaming human rights defenders such as the PC and its accompaniment organizations. However, these court rulings and directives have often been disregarded.

In 2012, the CCC ordered the Colombian government to adhere to five points in response to requirements laid out by the Peace Community in order to reestablish a dialogue with the state. The first point required an "official public apology" from Colombia's current administration for the defamatory statements made by former president Uribe. The apology came in December 2013, in which President Santos retracted the "unjust accusations against the Community," recognizing its presence as a "courageous vindication of the rights of Colombians that, despite having experienced the conflict first hand, has persisted in its efforts to achieve peace for the country."

The second point was meant to keep the fear and persecution of the past from again becoming a reality, requiring the state to lay out a plan for the prevention of any future stigmatization of the Peace Community of San José de Apartadó. While the completion of the first mandate held promise for 2014, less than one year after the Santos apology, negative and stigmatizing comments against the PC and its accompaniment organizations started circulating in news media by commanders of the National Army's local brigades.

In October 2014, for example, a television program called Testigo Directo (Direct Witness) described the Peace Community as a "bunker that authorities cannot enter...where it is assured or claimed that they are governed or co-governed by the FARC." Other comments targeted international NGOs and the IACHR as being used to provide protection for local guerrilla forces. The program featured an interview with Colonel Germán Rojas Díaz, commander of the 17th Brigade -- the military unit charged with maintaining control in the area of the PC -- in which he strongly stigmatized and defamed the PC and residents of the entire township where it is located, asserting that "their parents are from the Peace Community of San José de Apartadó...and the large majority of the ranks of the guerrillas are born and raised there." The interview was one of many by Colonel Rojas, and similar public statements were made by the commander of the region's 11th Mobile Brigade and his troops on the ground.

Efforts to delegitimize and weaken the Peace Community and international NGOs are not new. These groups have long been the region´s watchdogs, publicly denouncing actions of both illegal and legal armed forces that violate national directives and court rulings, and that frequently disregard the safety and rights of civilians as guaranteed by international humanitarian law. Similar stigmatization and media attacks were used in 2009 and 2010 against entities involved in judicial proceedings against the 17th Brigade, which has a history of allegations and official charges related to massacres, forced displacements, and ties to paramilitary groups. 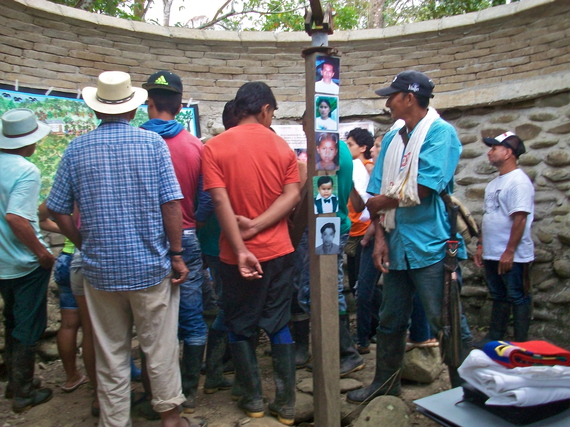 Peace Community members and guests gather for the 10-year commemoration of the 2005 massacre, which was carried out by the paramilitary group AUC in coordination with the Colombian National Army's 17th Brigade. (Photo by author)

More than its attempts to hold the Colombian state and armed groups accountable, the Peace Community has something that has always been highly desired by all actors: land. Over the years, the desire for Colombia's land has largely been tied to the establishment of political influence, control of coca production and transport, and large-scale land ownership for cattle ranches, and banana and palm oil plantations. Throughout the country, efforts by individuals and communities to maintain their lands have brought threats, displacements, and massacres. In recent years, the increasing international demand for natural resources has brought an influx of foreign investments and development interests, making land even more sought after. As of 2012, 40% of Colombia's land was licensed or solicited for mining.

The Peace Community is located along the Abibe mountain range, a historically strategic zone for illegal armed actors and coca transportation that lies between the departments of Antioquia and Córdoba. The region is strongly desired by the extractive industry for its coal, petroleum, and gold. Despite being highly militarized, the region is also known for its large paramilitary presence. The PC is one of the only local bodies resisting further control by armed groups and encroaching multinational corporations, and one of the few to highlight the connections between these entities and the state.

Colombia's Comptroller General has acknowledged the lack of state regulations and the relationship between heightened conflict and resource-rich zones. His concern that the current mining model is not "taking into account humanitarian, environmental and socio-economic implications" led to his recommendation to halt new mining contracts in areas of conflict. The Colombian Constitutional Court has also recognized that "In some parts of the country it's clear that actors of the armed conflict and economic interests have linked, a unity that is one of the principle causes of forced displacement."

In its November 2014 "Risk Report 078-04," the nation's Ombudsman Office denounced the "strong social, political, and military influence" of paramilitary forces in the region, and expressed great concern about the threats and stigmatization directed at leaders of the Peace Community. The same entity reported on housing and road projects being funded and facilitated by the region's powerful paramilitary group Gaitanista Self-Defense Forces of Colombia (AGC). Along the route of the road construction, peasant farmers report of being pressured and threatened to leave or sell their lands, which the AGC then sell to multinational corporations at much higher prices -- a lucrative business on the back of a devastating civil war. Despite several attempts, the PC has refused to allow road construction to pass through its lands, requesting that accompaniment organizations help provide additional safety and visibility in the zone.

More than a year since Santos' apology, the other points of the CCC's order have not been fulfilled, and the Peace Community of San José de Apartadó continues to face the challenges and dangers of maintaining its lands and existence while resisting the surrounding conflict and economic interests. Although it has slowed since the beginning of 2015, the observed stigmatization of the PC and human rights organizations by the National Army's regional brigades along with the continued refusal to grant them legitimacy not only casts considerable doubt on the Santos Administration's commitment to making human rights a reality in Colombia, but also on its ability to implement the complicated agreement being negotiated with FARC rebels.

[This article originally appeared on the Website of the North American Congress on Latin America (NACLA). Reprinted with permission.]

Nikki Drake is part of FOR Peace Presence, an international accompaniment NGO in Colombia. She has been living and working in South America for over three years. Check out her other articles: "The Fight to Abstain From Violence in Colombia" and "Hope in the Midst of a Violent Crisis: Life in Buenaventura's Urban Humanitarian Space."