MyType, a psychographic opinion research firm of which I am CEO, surveyed over 17,000 Americans about the Tea Party to reveal the demographics, values, morals and personalities of the movement's supporters. The survey data suggest that the movement is in the middle of an identity crisis. Devoutly religious conservatives comprise 22.5% of the Tea Party and are its fastest growing segment. They bring with them a fundamentally different set of values, morals and personalities than libertarian supporters, a core group that represent 17% of the party. While the former tend to be morally charged, family-oriented traditionalists, many libertarian supporters are neither religious nor traditional. Rather, they are independent, intellectual, and morally permissive. 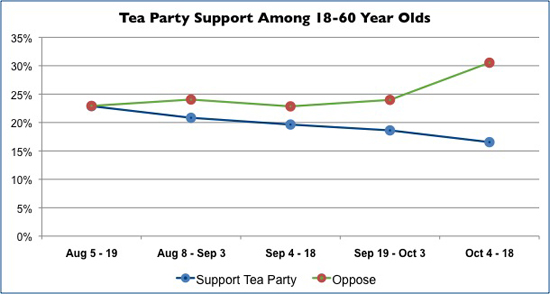 This data are based on an over 17,000-person sample that was normalized to reflect the age, gender, location and distribution of the general US population between the ages of 18 and 60. More methodology details are given at the bottom of this article.

Turnover Within the Tea Party 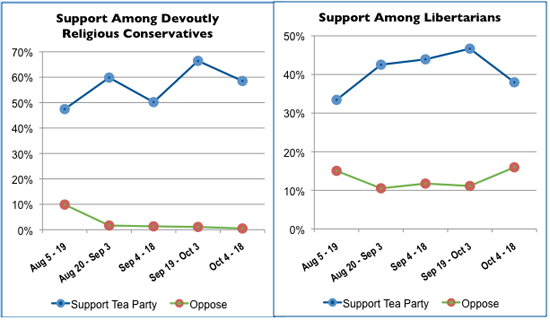 Libertarian supporters, on the other hand, appear to be leaving the movement. Between late September and mid-October, support among libertarians dropped from 46.7% to 37.8%, a relative decline of over 19%. During the same period, opposition among libertarians climbed from 11.1% to 16.0%.

Though religious conservative and libertarian Tea Party supporters may seem similar on the surface, their underlying values, morals and personalities are fundamentally different. The table below highlights some of the more distinctive characteristics of members within each group. Both tend to be white, well-educated, middle or upper middle class parents, and are more likely to live in the South. Religious conservative supporters, however, are often down-to-earth, traditional, and morally charged, while libertarian supporters tend to be intellectual, self-directed and morally permissive.

It seems unlikely that these distinct groups can remain united under one political banner. And indeed, the rise of religious conservatives and decline of libertarians within the Tea Party indicate a brewing identity crisis for the movement. The Tea Party protests began with the core libertarian values still listed on the party's official website: fiscal responsibility, constitutionally limited government, and free markets. Notably absent is any mention of social issues. Recently, however, prominent political candidates and public figures affiliated with the party have made headlines with their statements on social issues: Christine O'Donnell opposes all abortions except if the mother is going to die, New York gubernatorial Carl Paladino asserts that homosexuality is "not an equally valid or successful option", and The Huffington Post just reported yesterday that senatorial candidate Ken Buck "disagree[s] strongly with the concept of separation of church and state", echoing comments made by Christine O'Donnell just last week. While this seems to be attracting religious conservatives to the Tea Party, it's likely driving away socially permissive libertarians and others who originally joined the movement for its focus on scaling back government. Involving the government in moral prescription is expanding its influence, not scaling back. Karl Denninger, widely credited as one of the founders of the Tea Party, may have become the spokesman of Tea Party defectors when he recently denounced the movement, saying it has been hijacked by people obsessed with "guns, gays and God".

Given the religious conservatives' relative strength in numbers, the current trend will likely continue. Already they comprise over 23.5% of Tea Party supporters, compared to 17.0% for libertarians. A little over a year after the birth of the Tea Party, libertarians and other proponents of small government - no moral strings attached - may need to start yet another movement.

In the largest study of its kind, from August 5th through October 18th, 2010, 17,654 Americans were asked for their opinion of the Tea Party while completing MyType's online psychographic surveys. To mitigate sample bias, the dataset was normalized via stratified weighting to reflect the age, gender, location and personality distribution of 18-60 year old Americans. Of the 1,440 strata - representing every unique combination of gender, age range, census division and personality type - less than 5% needed a weight of 4 or higher, and less than 0.4% of respondents needed a weight of 10 or higher. Most of these underrepresented strata were male, 50-60 year olds from various census regions with one of a few personality types that are unlikely to take surveys.

The normalized sample resembles the racial distribution of the general US population with the exception of African Americans, who comprise 12.7% of the US population but make up only 5.2% of the sample. Households with above average income are slightly overrepresented, and those with low incomes are slightly underrepresented. The normalized sample is also moderately more educated than the general US population, with a higher proportion of college and postgraduate degree holders. For detailed data on how the sample compares to the general population, survey methodology, and all data provided in this article, see the full report.