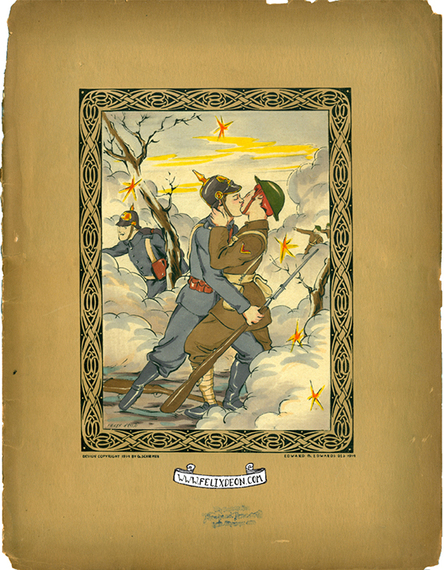 We Blaze Away by Felix D'Eon

Mexican artist Felix D'Eon makes work that re-imagines bygone eras and styles with same-sex love as its subject matter. What makes his art unique is that unlike most illustrators who draw from similar sources, D'Eon's technique is so flawless it's hard to believe the images are not authentically vintage. His impeccable skills and the unapologetic joyousness of his work have earned D'Eon a loyal fan base around the world. Since as gay people we have been largely robbed of our history particularly when it comes to visual arts, it is no wonder that D'Eon's work speaks to so many. He constructs an alternative world where handsome dandies and Russian princesses were openly romancing their lovers.

WH: Could you talk about your influences?

FELIX D'EON: I am mostly influenced by antique painting and illustration styles, ranging from the end of the 19th century through the 1950's or so. I find this whole era very elaborate, with a highly refined sense of aesthetics; furthermore, it is not so far removed from our own era, so that its language of romance and love resonates deeply with our own (in fact, I think that many of our fantasies of what it means to love are first given visual expression in this period. The era codified and solidified these visual concepts.) Using them as a basis for my work is a means to take their language, which has heretofore served the interests of a white, heterosexual audience (in spite of the often queer sensibilities of the artists themselves), and expand their reach, thereby enfranchising the previously marginalized by using their language of power and prestige. I'm a big fan of Hokusai. He is one of the greatest artists, in my opinion, who ever lived; his virtuosity matches that of Rubens or John Singer Sargent; his ability to suggest highly complex images with deceptively simple brushstrokes, his creativity with composition, and his great sense of humor, are all elements that I deeply admire and that I seek to emulate in my own work! 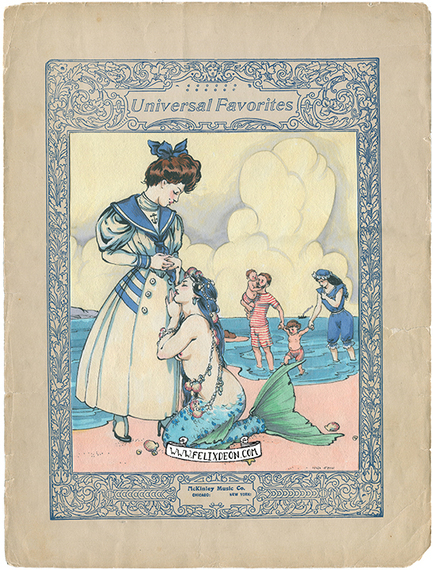 WH: What draws you to this style of art? Why do you think it speaks to you?

FELIX D'EON: As a child, the books my mother bought for me were antique; books from the turn of the last century, up through the 50's and 60's. I think she bought me books which she herself was drawn to, and consequently, my vision of the world was formed by these books from an early age. I'm thinking of Edwardian editions of Hans Christian Anderson and One Thousand and One Nights, the illustrated books of Arthur Rakham, and the old fashion magazines from the 20's and 30's my mother collected, filled with fashion plates of glamorous women. And of course, books illustrated in mid-century style, from the era of her childhood, such as the Golden Books (my favorites as a small child being Yogi Bear; which I still use as inspiration for my mid-century illustrations). So I think there is an element of nostalgia, of a visual language which was born in childhood through the consumption and appreciation of bygone styles. 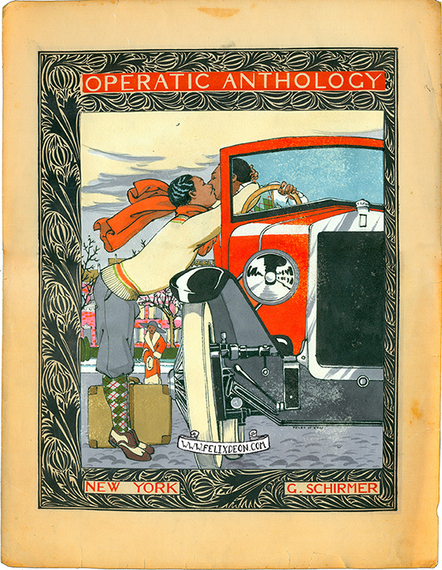 WH: You brilliantly capture the technique of vintage illustrations while at the same time recasting gay couples as your subjects. You're basically reclaiming gay history by creating these images. Do you ever think of your art as political in that way?

FELIX D'EON: I most certainly think of my art political; I consider it a form of subtle propaganda, in which it is unnecessary to paint rainbow flags or shout "gay pride," but in which the image itself is a form of critique, asserting gay pride through its very existence, using the language of historical mainstream culture to maintain as totally natural queer love and desire. At times, I do paint images that are explicitly political, as in my series of Gay Russian Propaganda posters, in the style of vintage communist posters. I am deeply in love with history, and always read as deeply as possible about any place that I find myself living in or visiting, and queer history is a fascinating, if often frustratingly opaque, subject. In my work I seek to shed light on these dark corners, which are hidden by the prejudices of the past, and to re-paint history, as though with my brush I could address the injustices of our forefathers and create a world that is free of prejudice and which fully embraces love and desire in all its beautiful diversity. 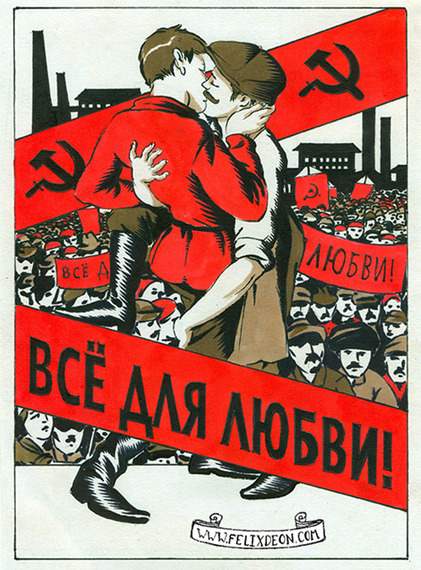 All For Love by Felix D'Eon

WH: Are there are contemporary artists that you're really excited about?

FELIX D'EON: Among my favorite artists are Kara Walker and Felix Gonzalez-Torres. I am influenced by William Kentridge, whose dark cartoons depicting the tragedies of apartheid in South Africa illustrate the way visual art can be used to expose and illuminate our shared and painful heritage. My work is very lighthearted in tone; the paintings as well as the photos on the blog, which illustrate a life of carefree love and sensuality. But in fact, I view it all as form of propaganda, a tool to normalize something that has been seen as deviant and outlaw for so long, and to capture a language of love and nostalgia for the gay community that has always been denied us. The artists I love have all helped me, in one way or another, to realize this ambition, even where they might seem dark while my own work is so light and airy. We are all addressing injustice and tragedy in our various ways. 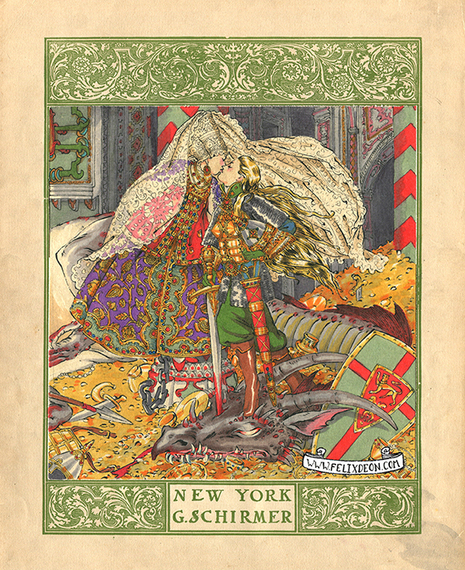 In the Dragon's Lair by Felix D'Eon

WH: The modern art world is at times disrespectful to figurative artists, especially illustrators. Have you experienced that in your career? If so, do you think the attitudes are starting to shift?

FELIX D'EON: I am not really a part of the art world. I have made a career for myself by selling directly to my audience, through my website, eBay, and Etsy. I show in galleries occasionally (I show regularly in the US and Mexico), but I don't see it as a career path. One of the great things about living in the era of the internet is the ability it gives artists to make it on their own; I frankly don't need galleries, or the approval of the art world, to do what I do and find both a way to make a living and the means to connect with an audience. I have never approached the art world; all of my gallery experiences have been at their invitation; I have never been rejected because I have never made an application! I also appreciate how accessible my approach is; my work is affordable, within the reach of most people who would want to possess a piece. I am not interested in the rarefied world of the art market; my work is meant to exist democratically, in the homes of ordinary people. However, that being the case, I actually think figurative art is perfectly acceptable in the art world, and has been for some time, at least since the 80's. John Currin, Lisa Yuskavage, and Kara Walker are just a few of the figurative artists who have become very famous in the art world within the past 20 years.

WH: Can you talk about about your upcoming book?

FELIX D'EON: I am planning on publishing two books this year, actually; one is a collection of my paintings on love in the Edwardian era (the non-erotic paintings - a book of explicit Edwardian gentlemen will come out later), and another book called Tops and Bottoms which is painted in the style of a mid-century children's book. The book will have pages that are cut in two, so that the top and bottom halves of each page can be combined in random ways. Its very dirty. 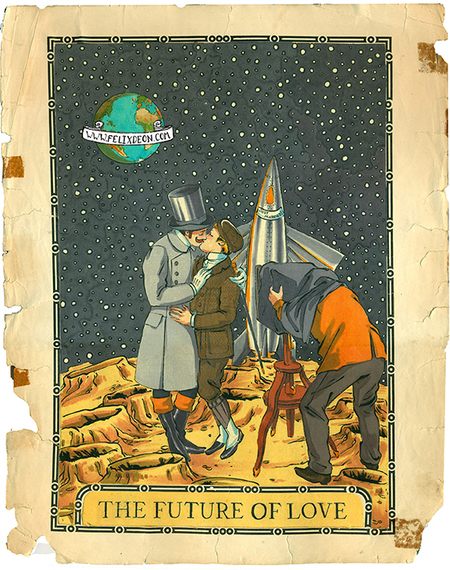 The Future of Love by Felix D'Eon

FELIX D'EON: No, the reaction to my work is pretty much the same here as it is in the US. Of course, I live in a bubble of liberality and gay acceptance which is Mexico City. It might be different elsewhere, as I am sure it would be in parts of the US. 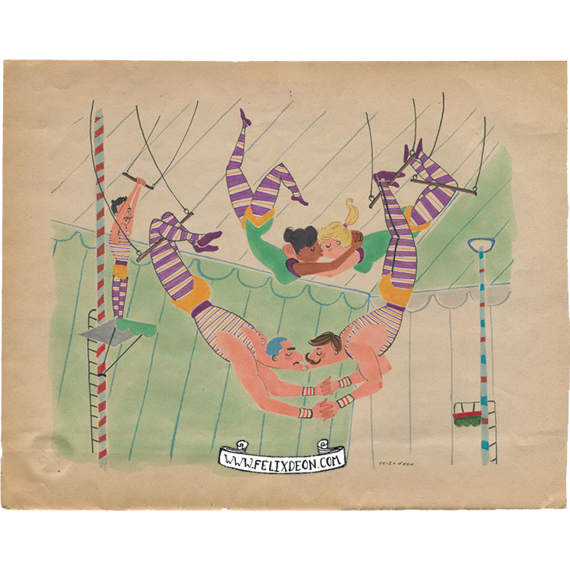 Love on the Flying Trapeze by Felix D'Eon

WH: Say you get paid tons of money to illustrate a book of your choice. What book would you pick?

FELIX D'EON: I think I might choose Our Lady of the Flowers by Jean Genet. It's a beautiful and disturbing book, which would lend itself well to my illustration style. Its a classic, and is quite visually compelling. And I love it. I have always dreamed of illustrating The Baron in the Trees by Italo Calvino, which isn't gay at all but is filled with amazing visual images (as the title might suggest!) However, a book which might be more entertaining to illustrate and also gay would be Last of the Wine by Mary Renault, which I love, and which, while less serious as literature, is filled with beautiful scenes of love between men in ancient Greece. It's a book I have always loved! 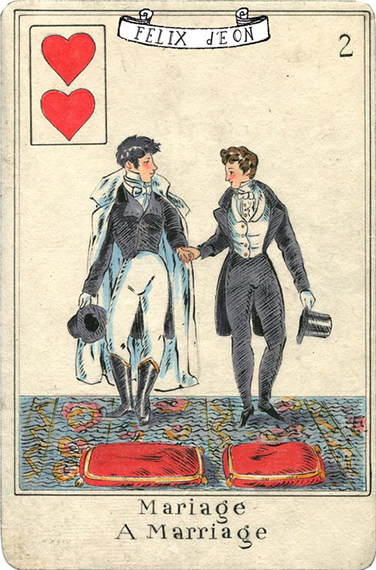 A Mariage by Felix D'Eon