Despite the fact that, when I lived in Salt Lake City a few years ago, chestnuts littered the ground every winter, I'd never thought to pick one up and eat it. I'd passed roasted chestnut vendors around Union Square in San Francisco, and while the idea sounded interesting, for some reason I just never partook or thought about making roast chestnuts myself. I've always considered winter to be Homemade Chicken Soup Recipe soup and stew season, so the idea of roasting nuts just seemed like a strange idea.

Flash forward to last week, when I noticed that a tiny vendor at the farmers market was selling organic chestnuts for $3 a pound. I'm not sure what made it click (maybe it was the smooth, shiny brown hulls, or how they just felt so uniquely wintery as I ran my fingers through the bin full of lacquered-looking nuts), but all of a sudden I felt the visceral urge to eat these things. So I bought a bag.

Once I got the chestnuts home, I had no idea what to do with them. I had no open fire, as the song notes, and my oven has no broiler. A quick Google search provided me with all the answers I needed. I also learned that roasted chestnuts are low in fat, high in fiber, and carry a notable amount of vitamin C. They contain manganese, potassium, copper, phosphorus, magnesium and iron, among other nutrients, and 100 grams of chestnuts contain 213 calories. A few sources even noted that chestnuts can help prevent the common cold, apparently a result of the high vitamin C content. Interesting.

Turns out that making roasted chestnuts is ridiculously easy. You just flip on the oven -- or open fire, if you're so inclined -- cut an X into each nut to prevent then from exploding, and roast them for half an hour. And here is where I got myself into trouble.

Never one to miss an exciting explosion, I decided to leave one chestnut without the aforementioned X-shaped cut because I wanted to see what would happen. Maybe I should have learned from my failed exploding potato experiment when I was a kid, which resulted in me spending two hours scrubbing burnt tater bits out of the nether regions of my mother's oven. Please don't call me obtuse. I prefer the term adventurous.

So I leave one nut un-X'ed, a grand, glimmering beauty of a chestnut. Perhaps the most perfect of all the ones I'd bought. I figured, what better specimen to sacrifice? I slid the tray of chestnuts into the oven, excited to see what would happen next. After about two minutes I got distracted, so I started doing something else.

As I was sliding a dish into the dishwasher about 10 minutes later, a deep, booming shotgun went off in the room. I hit the floor, the dish fell and shattered, and I bumped my head on the edge of an open cupboard. Dazed and confused, I looked around the room to figure out what the heck had just happened. After a few seconds of disorientation, the unmistakable odor of burnt chestnut assaulted my senses and the room started to fill with smoke. 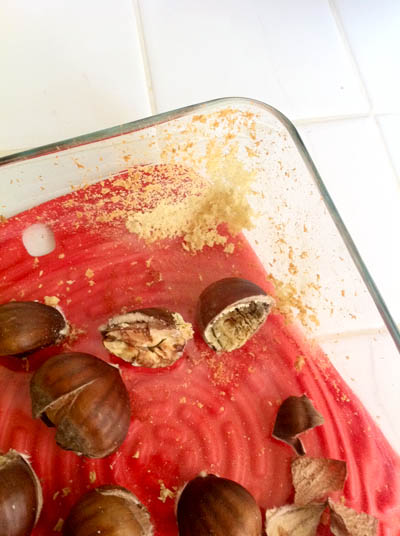 I opened the oven, and yes indeed -- there were bits of burnt chestnut everywhere. Not only that, but the force of the blast had blown five or six other chestnuts out of the pan, and they were now scattered all over the place, including stuck in the lower heating element of the oven. I cursed loudly, and then I had to laugh. This is exactly the explosion I've been hoping for -- I just wish I'd been better prepared. 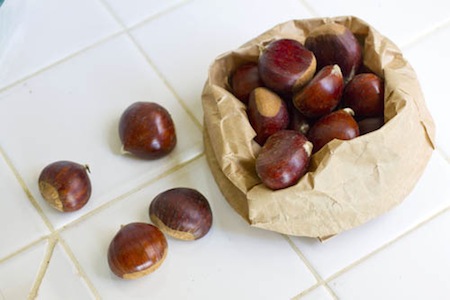 The non-exploded chestnuts were delicious. Insanely delicious. Sweet, nutty, and incredibly tender, they were one of the best winter snacks I've ever eaten. 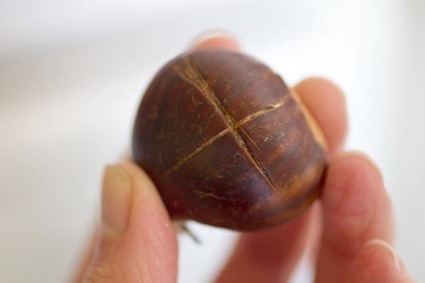 I had considered sprinkling them with powdered sugar, but there was no need. They were perfect au naturel.

And guess what? I spent about an hour cleaning out all the chestnut shrapnel, which got into every nook and cranny of my oven, and whenever I baked something for the rest of the week, the kitchen smelled like roasted chestnuts.

How to Roast Chestnuts

1. Buy, gather, or otherwise acquire one pound of chestnuts. Any variety will work, as long as they resemble those in the photo above. 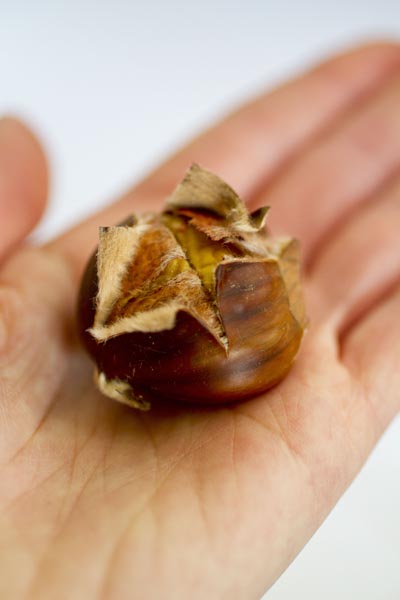 3. With a small, very sharp knife, cut a good-sized X across the curved side of the chestnut (not the end of the nut where it was attached to the tree). Make the X big enough that is spans the entire side of the nut so that it will be easier to peel away the skin after roasting.

4. Place chestnuts X-side up in a baking dish large enough to leave a little space between them. Bake for 30-35 minutes.

5. Remove roasted chestnuts from oven and set aside to cool. Once they are cool enough to handle, peel back the skin of the nut and enjoy. They're best hot and require no salt or sugar to taste wonderful.

Winter Holiday Season Nuts Christmas Bake
This Blogger's Books and Other Items from...